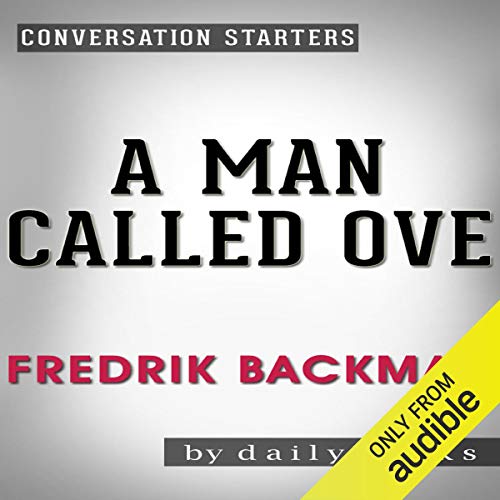 By: dailyBooks
Narrated by: Bryan Nyman
Try for $0.00

Please note: This is a summary and analysis of A Man Called Ove, not the original book.

There is a man who has lost all hope in life. He has been brought up to do the right thing, but has never been able to show much emotion. After the death of his beloved wife, Ove has no reason to live. That is until an Iranian woman named Parwaneh shows up next door with her clumsy husband and two adorable daughters.

Gradually, Ove realizes that as much as he misses his wife, he could contribute something to society and, in turn, gain from other people.

A heartwarming and simple story of a man who finds a purpose in life, A Man Called Ove is humorous and heartrending in equal parts.

A brief look inside:

Conversation Starters is peppered with questions designed to bring us beneath the surface and invite us into the world that lives on.

These questions can be used to:

What listeners say about A Man Called Ove: A Novel by Fredrik Backman | Conversation Starters

THIS IS NOT THE NOVEL BUT A TRICK TO GRAB $$

THIS IS NOT THE NOVEL BUT A TRICK
Poor fool that thinks he is getting a book
Where does one complain to Audible?

I thought I was going to get the book. Instead I got 25 irritating questions read by a monotoned reader. Very disappointing.

this is not the book. only a summary. . not worth one credit

This is just a summary! I WASTED $ for NOTHING!!! Do NOT PURCHASE THIS!!! A SUMMARY ONLY

1 credit for only a few minutes

I am very disappointed that I thought I was getting a book. Why would you offer other book samples for free but charge a credit for this one. I thought that I was buying a book.

All this was a series of short questions. Where’s the book? Total waste of time...

Wanted to Return it after 7 mins!

I couldn't stand the reader's high pitched, emotionless voice let alone the absence of plot. The repeated question about suicide did not help either.

I thought I ordered the real book to listen to...

so disappointed. ..I thought I was ordering the REAL BOOK to listen to. how can I get the genuine book, is it available through Audible?