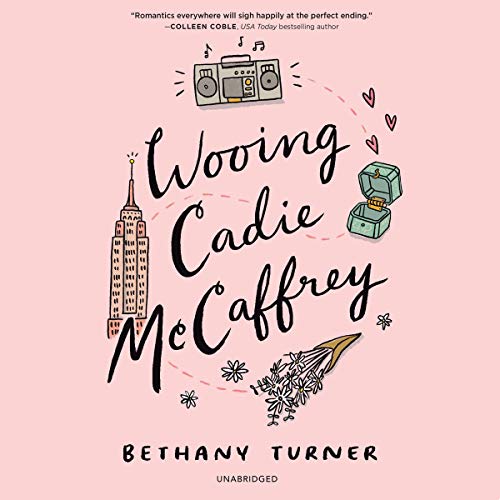 By: Bethany Turner
Narrated by: Suzanne Elise Freeman
Try for $0.00

After four years with her boyfriend, Cadie McCaffrey is thinking of ending things. Convinced Will doesn’t love her in the “forever” way she loves him, Cadie believes it’s time for her to let him go before life passes her by. When a misunderstanding leads to a mistake, leaving her hurt, disappointed, and full of regret, she finally sends him packing.

But for Will, the end of their relationship is only the beginning of his quest to figure out how to be the man Cadie wanted him to be. With the dubious guidance of his former pro-athlete work friends and tactics drawn from Cadie’s favorite romantic comedies, Will attempts to win her back. It’s a foolproof plan. What could possibly go wrong?

Bethany Turner is back with more of the heart and humor listeners love. Anyone who enjoys a good romance or binges romantic comedies on Netflix will devour this delightful story.

If you want a Christian romance, you may enjoy this. I don’t know. I’m giving the story the benefit of the doubt that all the flaws are because of that. But when I choose a romance I don’t want the author preaching at me. It would be nice if there was some sort of mention in the summary blurb to let those of us who choose not to waste time on this a warning before choosing this title.

If you like your romances with a hefty dose of Christian molarizing this is for you. Cute story, but very preachy.

I wish I would’ve known this was about a 34-year-old virgin before I bought this book. The idea that this woman had to get the blessing of her overly controlling parents to find happiness was ridiculous.

Other reviews call the author preaching and subject preachy. But that's not true. It's a story of two Christians and their relationship. Yes a small part is how they struggle with attraction and avoiding premarital sex. At no point in the story does the author preach that belief, it's just the belief of the characters. The other review that said they gave up their life for God, is very sad. I don't know what part of the story make them think they have given up anything.

Not what I wanted

This definitely felt like I was getting preached at While if you are "a Christian" and you feel very strongly about those beliefs, this might be a great read/listen for you.
I am all for cute romance without graphic love scenes... however the whole premise of this book sort of felt like the author was passing judgement on me.
no thanks. could not finish.

Long, rambling, shallow. I thought it would never end. Only finished it bc it was free

I really liked this book. I get tired of graphic sex scenes in books so it was nice to find a clean book. There are a few swear words but no f words.

Parts of this story were funny and entertaining - yet I can not recall feeling this frustrated with a book in a long time! Seriously, the heroine is nauseating. The author set up such a supportive environment with friends and at work. Then, she then has the heroine so stupidly... and this after author goes to lengths to establish how smart the heroine is. I THINK she was going for relatable but instead I only wanted to shake her. Super disappointing as the book started out with great promise. Does it have a happy ending? yep but good grief. The misunderstanding/not communicating stuff just lasted a tad too long.

The two main characters say they are “Christians who have given up their lives for god.”