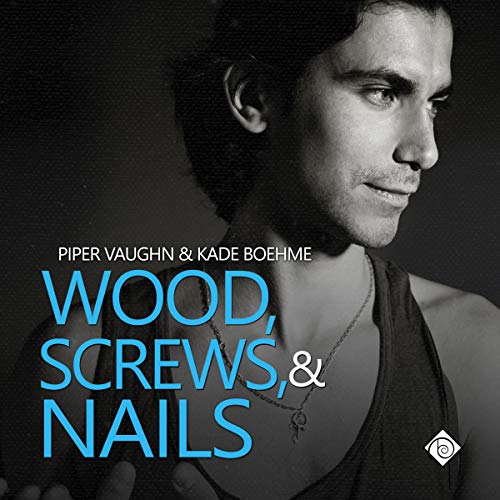 By: Piper Vaughn,Kade Boehme
Narrated by: Paul Morey
Try for $0.00

Aaron Costa's summer was all planned. Despite having to remodel the family lake house, it would be a vacation of sorts, and he had every intention of enjoying it - until the friend who was supposed to help him got injured and left him in a lurch. He decides to take the opportunity to bond with his son and hires Julian and his roommate, Malachi, to assist.

As a broke college student, Malachi could use the money, and spending the summer with Aaron for eye candy sounds like a dream. "Look but don't touch" becomes his motto. But when Julian starts flaking on his responsibilities and Malachi and Aaron are forced to spend long hours alone together, their mutual attraction is impossible to resist.

Aaron can't fight the temptation sexy Malachi presents. But more than their age difference stands in their way, not the least of which is Aaron's semi-closeted status and the fact that he's never openly discussed his sexuality with his son. He has no idea how Julian will react when he learns his father is not only gay, he's also dating his best friend.

What made the experience of listening to Wood, Screws, & Nails the most enjoyable?

Paul Morey! The man has this voice that just drips off the headphones like honey.

Malachi. He is so young but so sure of exactly what he wants.

The hotel room. Chris, I needed a cigarette after that scene, and I don't even smoke!

If you could take any character from Wood, Screws, & Nails out to dinner, who would it be and why?

Again, Malachi. I think he'd be the most entertaining of the three.

What is supposed to be an easy summer, working with his best friend and roommates dad at their families cabin, turns in to both the best and the worst summer ever for Malachi. He has always been attracted to older men, and Julian's dad is no exception, even if he is off limits. But when Malachi and Aaron wind up spending much of their time alone, sweating, working on the remodeling by themselves while Aaron parties his socks off, their mutual attraction can't be ignored for long.

It's just a summer thing, a fling, a chance for two guys that are extremely attracted to each other to use each other to their advantage. When the summer is over, so is their little romance. Both men argue with themselves over the growing attachment to the other, it was one of my favorite aspects of this story. I'd love to know some day if the actual person and their words was one author, while their inner monologue with no one but themselves was the other, that would be sheer genius! While Malachi is of the opinion that what happens between him and Aaron is no one elses business, Aaron struggles with the secret he is keeping from his son. The anticipation of that explosion was another aspect of the story I really enjoyed. And when Julian learns the truth, not only is his father gay and never told him, but he is screwing his best friend that is sixteen years his father's junior, well, it wasn't pretty.

Three relationships hung in the balance at this point. Julian's relationship with his father who hasn't been honest with his son about who he really is. Julian's relationship with Malachi, his best friend who has been romancing his dad behind his back. And then there is the relationship between Aaron and Malachi. Once mind, body and soul have become attached to another, it's not easy to walk away, no matter what you tell yourself. Malachi showed maturity beyond his years when he chose to apologize to Julian and walk away from the situation, even if it did break his heart. Does Aaron follow?

Narrated by the great Paul Morey who can make anything interesting to listen to. But having a well honed manuscript like this one certainly made his job that much easier. The story flowed well from start to finish, there were all these different moments of anticipation strategically placed perfectly throughout the book. That first kiss, their first time, the secret revealed and then that ending. Morey really captured the uniqueness of each character as they were written with tone inflections and attitude. There was passion, romance, intrigue, anticipation and a little bit of sadness as well.

If you are a fan of May to December romance, hard fought happy ever afters and stories that at the core are about being true to who you are, then you will be a fan of this book. I must warn you, there is a scene in a hotel room that is absolutely filthy. Sweaty, limbs locked, head board banging the wall, no one else within a five mile radius of that damn room will be getting any sleep tonight for all the shouting and screaming that is taking place in that room, christ I need a cigarette filthy. I loved it!!!

This was my first ever audiobook and I was pleased with the person reading it.

This was overall a good story. Not worth a credit but a good listen. The narrator of course did a great job. I really dont mind a big age difference between couples. I would listen to this book again.

This is a pretty straight forward May/December story. Aaron is a contractor, fixing up his own house with the help of his son Julian and Julian’s friend, Malachi. Aaron got his high school girlfriend pregnant, so though there is a considerable age gap (16 years), it isn’t too large to overcome. At this point everyone is over 21 and well over the age of consent.
It becomes evident early on that Mal finds Aaron attractive, but Aaron tries to do “the right thing” and abstain. Temptation gets to be too much and a lot of very hot, hot sex ensues.
Meanwhile, Julian acts like an ass, discovers Aaron and Mal’s secret and Aaron breaks up with Mal for the sake of doing “the right thing”, again.
But… Aaron reconsiders and tracks down Mal and a very satisfying HFN/HEA is what we are left with.
**
I really liked the characters, Malachi especially. He was brave and hot and temptation on a stick. Aaron was a little less likable, mostly because I didn’t like how he let his son get away with acting like a douche so much of the time.
The sap in me wanted the story to end on more secure footing, we never really got to see them as an “out” couple, and it’s hard to judge the success of a relationship based on the hotness of the sex, but I got the impression that things looked optimistic for Mal and Aaron to make things work long term. Since this is the first in a series maybe (hopefully!) we will see more of them over time.

Paul Morey does a great “growly” voice and he is a perfect choice for Aaron. I always enjoy his narrations and thought that listening to this was even better than reading the book.

Dad like son's best friend...they start a kinky little romance while the boys are helping out during the summer... and oops... son finds out and goes crazy...but it was true love...so dad chase best friend for HEA!!!

Narration was awesome of course... it was Paul Morey...he does awesome m/m romance...

Great buy or sale... don't waste a credit...this is so cheap just under 5 bucks..

SOOOO much better than I was expecting.

This book has been on my wishlist forever without my purchasing it for a couple of reasons - The price point was too low to want to spend a credit and too high for me to want to spend cash on it. The length is too short for what I usually look for in a book and too long for the usual short stories I go for. The synopsis made me afraid that it was going to be a terrible, juvenile, painful story. So why was it on my wishlist? I recognize the authors, I am a fan of the genre, and it has good ratings, so maybe ... sometime, when there isn't something else ahead of it in line waiting for me to listen to it ...

Thank goodness sometime finally came along. It is short ... and a quick listen. But if it had been longer then the angst might have killed it for me, and if it had been shorter then I wouldn't have had all the moments to fall in love that I did. The only short-coming is I feel like the son got the short end in the story telling. I want to like him, worry for him, feel the affection and therefore angst that both the main characters feel, but instead he really just comes off as a dis-likable spoiled brat. It made it hard for me to worry about him getting his feelings hurt, which is the driving concern of the main characters.

In spite of that, I am completely on board with the love match in this book and appreciate that it is depicted as a real relationship that develops over the course of the summer, fueled by but not driven by hormones and kinks. I am totally happy to have added this novella to my permanent collection and will undoubtedly revisit it from time to time.