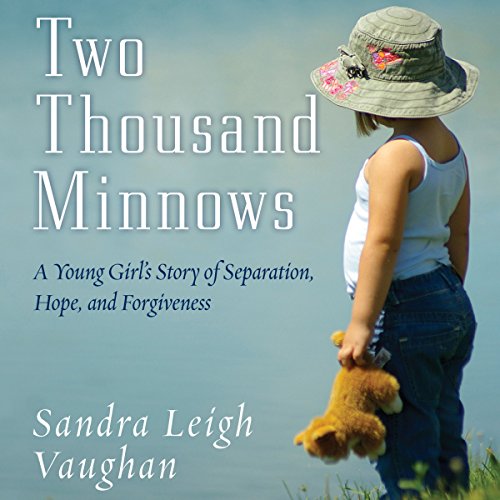 By: Sandra Leigh Vaughan
Narrated by: Elizabeth Evans
Try for $0.00

When Sandra Leigh was seven years old, she fell into the role of protector of her mother and three younger siblings. One winter night, she ushered her mother out of the house during one of her father’s tirades, and then snuck her back into the dark home through a window. Sandra was used to events like these; what she wasn’t used to were the mountains and nature surrounding her new home in West Virginia. Raised in the city, it took some time to get used to the long, hot summer days and nights, but she soon found that the forests, rivers, and mountains were more secure and comforting than the house that held her abusive and volatile father. Catching minnows in the gentle river, riding on rope swings, and exploring the outdoors distracted her from what was waiting at home. But then, her mother became pregnant again, and Sandra’s concern for her family and their well-being grew when her mother returned home from the hospital without the baby. In Two Thousand Minnows, Sandra reflects on the events of her childhood and adolescence, including the time spent traveling across the country with her anxious, worn-out family in a small, cramped car. As Sandra grows older, she realizes that what they’re chasing when they move from town to town the perfect, stable life cannot exist, at least for her, until she has the answers to all the questions she never asked. As an adult, Sandra decides to stop running from the past and instead revisit it, refusing to give up until she unearths the truth and finds the sister who never came home.

The narrator was an easy listen. The story has left an impression long after it is over.
Two young people ill equipped,possibly damaged, marry with the confidence of youth. Into that relationship children are introduced. The perspective on this story is from the oldest child. It’s about the south, it’s about love for parents and siblings, and it’s about the loss of self worth when what a child needed was not given due to parental struggles. I can see the gifts she received from each parent through good character development. I could see the uncertainty of abused trust and a child assuming control of adult situations.
The story follows the social idea of marriage expectations, so the reader of today might say, “Why didn’t they just divorce?” and get impatient with the story. But the man had the role of provider and the woman had the role of subservience.
This story will make you think. It doesn’t deal with years therapy, it deals with evolution of love in the family process.
See....told you I was still processing this story!

A great story that touches on love in a difficult family dynamic. Made me sad at times, mad at times and actually laugh out loud at times. Thanks so much to the author for telling your story. There is much that can be learned within the pages.
The narrator does a great job as well!

This book felt like a conversation, very east to read and listen too!! Loved it!!

I did not finish this book so my review is for the first half only.

It started off pretty good, but then dropped into hum drum lives and even the apparent exciting parts were jumbled over leaving the reader wondering what the importance was.

I kept waiting for proverbial other shoe to drop and it never did. I got to the point where I was looking to see how much longer it was, when I felt like it was time to be over and saw there were 10 hrs left I finally gave up. Couldn’t imagine sitting through ten more hours of Meh.

The bright spot was the narration. The narrator brought the story to life and made it at least sound interesting! I gave it overall 3 stars and that was mostly the narration.

This book seem to drag on and on. And it seems as if the sadness never ended. It made me thankful for the childhood that I had. Although and there were some troublesome spots, I did not have a fraction of the worries that these poor children had to endure.

To finding my lost sister..

absolutely love, love this book.. Hung on every word.
a wonderful tell of life with its constant change

I enjoyed every minute of it. Every part of her life told is an important piece of background and this story is not one to rush through, but to float through. The reader was amazing. If you enjoy good writing, I highly recommend.

i loved this book

i saw a lot of myself in being the older sister. taking care of the family. i to grew up in a crazy family life . to know that no matter what you still love them. you must read this book . you will laugh cry and be angry to. just what a good book is ment to be

Loved the story. Draws you in and you can get lost in her world. Some parts a little drawn out but easy to over look. Overall I loved this book

An incredible story. Vaughn is a gifted writer - Her use of words was captivating and believed I shared her journey with her - feeling what she felt. Such a powerful story of love and forgiveness.