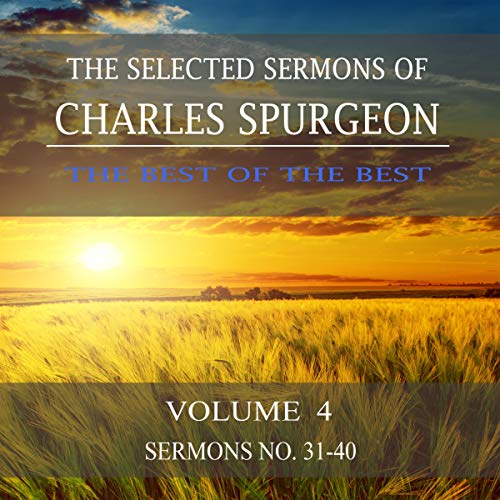 By: Charles Spurgeon
Narrated by: Wayne Edwards
Try for $0.00

By the time of his death in 1892, Charles Spurgeon had preached nearly 3,561 sermons as well as 49 volumes of commentaries, sayings, anecdotes, illustrations, and devotions. His writings were so prolific and his sermons so numerous that for years after his death many of his sermons still continued to be published on a yearly basis.

In 1906, the William Jewell College in Liberty, Missouri purchased Spurgeon's 5,103-volume library collection for £500 ($2500). In 2006, the Midwestern Baptist Theological Seminary in Kansas City, Missouri purchased the collection for $400,000 and is currently in the process of restoring it. The Samford University in Birmingham, Alabama also holds a collection of Spurgeon's handwritten sermon notes from the years 1879 to 1891. At present, Delmarva Publications is undertaking the work of publishing the complete works of Charles Spurgeon.

Spurgeon began his preaching career in 1854 and became the pastor of the New Park Street Chapel in Southwark the same year. A year after receiving the appointment of his new church, Spurgeon began publishing his sermons under the name of the New Park Street Pulpit. Seven years later he, along with his congregation, moved to the newly constructed church at Elephant and Castle in Southwark which was able to better accommodate the size of his growing congregation. The new church was named the Metropolitan Tabernacle and his sermons were published as The Metropolitan Tabernacle Pulpit. Spurgeon’s printed sermons number 3,561 and are typically distributed in 63 volumes (approximately 56 sermons per volume) under two names - the first seven volumes are usually under the New Park Street Pulpit, and the remaining 56 under the Metropolitan Tabernacle Pulpit.

The Selected Sermons of Charles Spurgeon contain a carefully selected variety of some of his most popular sermons. Each volume contains 10 sermons.

What listeners say about The Selected Sermons of Charles Spurgeon: Volume 4: Sermons 31-40

Get the whole series!

Charles spurgeon is truly one of the greatest preachers to have walked this earth. He dedicated his entire life to preaching and these sermons are just a few of the truth he preached in all of his sermons. I highly recommend morning and evening as well and watching the documentary on his life which you can find on Amazon video. Sometimes he preached hard words but every sermon is a must hear/read. In the documentary of his life it was rumored that people saw Angel's on a mountain overlooking the place where he gave up the ghost. Charles spurgeons' walk with Christ is something that every Christian should learn/yern to walk like.