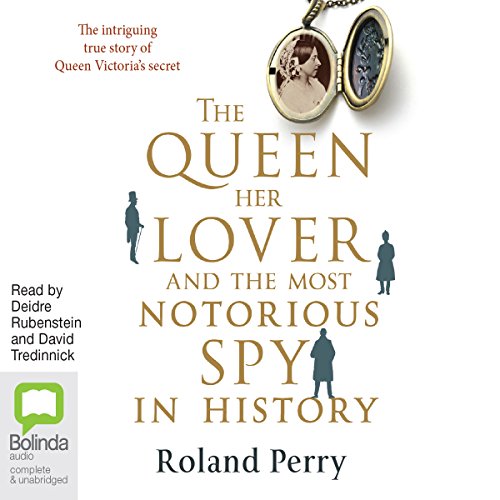 The Queen, Her Lover and the Most Notorious Spy in History

By: Roland Perry
Narrated by: Deidre Rubenstein,David Tredinnick
Try for $0.00

Long before her successful marriage to Prince Albert, Princess Victoria had an affair with the dashing Scottish 13th Lord Elphinstone. After the liaison was exposed, Elphinstone was banished to India, appointed Governor of Madras, which allowed Victoria's mother to engineer a royal union for her with Prince Albert of Saxe-Coburg. After five years of pining for Elphinstone, Victoria finally gave in and married Albert.

Despite a successful marriage, Victoria never forgot Elphinstone and after a decade in India he returned to her side as Lord-in-Waiting at Court. He only left her to take up the critical role of Governor of Bombay during the Indian Uprising of 1857. Elphinstone died soon after in June 1860 from a fever.

Many attempts were made to bury the memory of Lord Elphinstone, his long-running relationship with the monarch and his grand service for the Empire, but Victoria recorded it in letters to her confidant, her first-born, the Princess Royal: 'Vicky'. The revealing correspondence, like a ticking time-bomb, sat in a German castle attic until 1945 when King George VI, Victoria's great-grandson, sent a courtier, MI5 operative Anthony Blunt, on seven special missions to gather the letters.

What listeners say about The Queen, Her Lover and the Most Notorious Spy in History

Enjoyed this book, how the authors perspective captured the complicated and real yet personal aspect of a Royal life we all know about. Very interesting if you like the royal family history.

The more that is known about the true royals, the better to see through and do away with this anachronistic affront to the principle of human equality.

Would you try another book written by Roland Perry or narrated by Deidre Rubenstein and David Tredinnick ?

What could Roland Perry have done to make this a more enjoyable book for you?

Stick to the facts. The invented dialogue ruined this for me.

The narrators were fine apart from a few oddities. E.g. Courtauld Is mispronounced. Why? It's not French.

Sorry. No. I expected history and new research. I got massive speculation and a rehash of well known facts.

I think this book's billing should be changed. It is a mixture of fact and fiction and guesswork. Certainly not a serious work of history or even of journalism.Sensationalist. Aimed at the gullible.

I found this impossible to listen to. Invented dialogue and horrendous accents, particularly the Scottish ones made it very grating. Avoid.

Really don't know perhaps someone who likes to listen to tales

What could Roland Perry have done to make this a more enjoyable book for you?

It gave me an insite into the princess Victoria's younger life

Less factual then I'd hoped

So much of this book is supposition & fantasy, admittedly the author prefaces that he's written in they style of a docu-drama but this really pushes that boundary. I had hoped that at the end the author would reveal that a lot of the story was based on facts he had read in missing/secret letters but alas it turns out it's all based on letters he's HEARD about (from KGB ex spies desperate for money - such a trustworthy source!) and what he has read between the lines from a courtiers archive. The dialog between characters is terrible & unnatural and overall paints a picture very unlike every other portrait of Victoria. I was looking for interesting insight. What I found was farcical fantasy. Fine if you view it as a alternative history or pure fiction but otherwise unimpressive.

Who said history was dull!

What did you like most about The Queen, Her Lover and the Most Notorious Spy in History?

I was surprised at how intriguing this story was, it kept me interested all the way through

The talents of narrators continues to impress me...they bring characters and stories to life
This story was interesting but i struggled with the end
...all the fuss about Victoria's lover seemed a bit passe in 2015.
but i suppose it was easier to read as audiobook than novel
An interesting snapshot of history and review of the Royal family