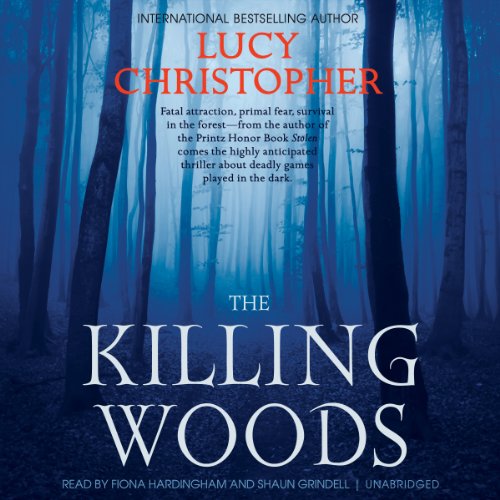 By: Lucy Christopher
Narrated by: Fiona Hardingham,Shaun Grindell
Try for $0.00

Fatal attraction, primal fear, survival in the forest - from the author of the Printz Honor Book Stolen comes the highly anticipated thriller about deadly games played in the dark.

Ashlee Parker is dead, and Emily Shepherd's dad is accused of the crime. A former soldier suffering from PTSD, he emerges from the woods carrying the girl's broken body. "Gone," he says, then retreats into silence.

What really happened that wild night? Emily knows in her bones that her father is innocent - isn't he? Before he's convicted, she's got to uncover the truth. Does Damon Hilary, Ashlee's charismatic boyfriend, have the answers? Or is he only playing games with her...the kinds of games that can kill?

What listeners say about The Killing Woods

Teenage romance with a murder plot. More romance & teen angst than murder mystery. Story is told in the first person of two characters. I only liked the two narrators. This is a book for teens.

Author is not afraid to hit on tough subjects!

I read Lucy Christopher's debut novel, Stolen, several years ago and have found myself thinking about it every few months. I don't often find authors of whom I can say I truly enjoy their work. it was very well written.

This book, The Killing Woods, was equally well written. I enjoyed the changing perspectives between the 2 main characters. I will not go into the subject matter of this book but let the readers go through the suspense themselves.

in my daily life working in the ER, I see the tragedies of youth/young adults who don't know the dangerous consequences of their actions.
And yes, I do also see the same of older adults and while this is also tragic, most have lived long enough to understand actions and consequences.

This is a book well worth reading for both young adults and older adults!

This is a well-crafted mystery. I enjoyed the author's writing style, and I will be looking for more of her books.

Hope to read more by this author soon. The story was great. Narration and reading was on point. Worth your time!

I enjoyed this book. The author kept a good pace, with rarely any dull drawn out chapters. A nice little twist towards the end. A good read if you enjoy thriller/suspense.

Everybody in this story is paranoid schizophrenia!

liked the ending, but that the entire middle of the book (hours of listening) was a jumble of words that contradicted themselves from every character. I was actually seriously surprised I finished this book. Every character dramatically changed there thought and directection in a very unrealistic way.

I really enjoyed listening to this book. in the beginning I wasn't sure if I would be able to keep my attention focused but the more I listened the more I got involved in it and I am so glad I listened to it all the way to the end. I will find another one of her books to listen to. hopefully it will be just as good

I couldn’t make it through the book, couldn’t get past the male narrator. I try not to complain and I usually don’t leave a review but take my word for it leave this one where it is.

Enjoyed listening to this twisted tale. The voices of the readers were great! Looking forward to listening to another book by this author.