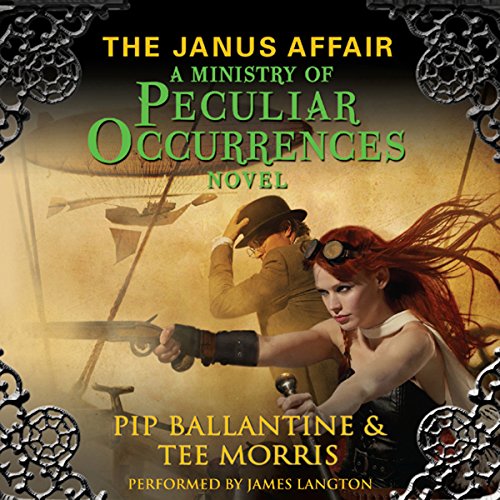 By: Pip Ballantine,Tee Morris
Narrated by: James Langton
Try for $0.00

Evildoers beware! Retribution is at hand, thanks to Britain's best-kept secret agents!

Certainly no strangers to peculiar occurrences, agents Wellington Books and Eliza Braun are nonetheless stunned to observe a fellow passenger aboard Britain's latest hypersteam train suddenly vanish in a dazzling bolt of lightning. They soon discover this is not the only such disappearance ... with each case going inexplicably unexamined by the Crown.

The fate of England is once again in the hands of an ingenious archivist paired with a beautiful, fearless lady of adventure. And though their foe be fiendishly clever, so then is Mr. Books ... and Miss Braun still has a number of useful and unusual devices hidden beneath her petticoats.

What listeners say about The Janus Affair

Even Better than the First Novel in the Series

I am fascinated with this series, as I am with many other Steampunk series. But the Ministry of Peculiar Occurrences ranks in my favor up near Gail Carriger's Parasol Protectorate (which I absolutely adore). Just as in the first book of the series, Phoenix Rising, the plot's central mystery easily moves the novel along while Ballantine introduces intriguing characters, and delves deeper into the professional and personal relationship between partners Eliza Braun and Wellington Books. I highly recommend.

Can't get enough of the Colonial Pepperpot!

This series just keeps getting better and I can't wait for the next one. Book 2 provides a little bit more of our heroes' back story but I still want to learn more. It's a fast pace rollicking adventure loaded with the action, by play, and humour that made Book 1 such a success.

Books and Braun are growing into a memorable partnership with their vibrant interaction. Each wonderfully drawn character providing the prefect foil to the other and don't forget our favourite Italian asassian. Then, there is that secret room down in the archives.

It's always the quiet ones

Having read and enjoyed the first book of this series, I was eager to read Book 2. Although it was still good, the "interludes" were a bit confusing. There are many characters in the story and, at times, it was difficult to keep track of them all. James Langton does an excellent job of narrating this story. I enjoyed learning a bit more about the Ministry 7. Overall, this was a fun read.

Action adventure and a real mystery

If you could sum up The Janus Affair in three words, what would they be?

I love the language with the proper sentences and words that are English and very discriptive, Both main characters feed the story and the Ministry 7 add to the flavor

What other book might you compare The Janus Affair to and why?

Hard to say this is unique and very interesting

When I picked up the first book in this series, I got exactly what I'd hoped for: a lot of fun. Typically I expect sequels to not quite live up to the standards set by the first in a set, but in this case, I am pleasantly surprised. Pip Ballantine and Tee Morris have expanded upon the characters of our heroes, their world, and the underlying menace they face. Just when you think you know everything about any of it, the game changes. Even with the clues in front of me, I felt like I'd missed the obvious when the big Scooby reveal was made in the course of the whodunit. My only complaint? That I have to wait for book 3 to appear. This series has gone from being a whimsical listen to one of my favorites, and the setup leading into the next book has me chomping at bit. It's not a cliffhanger, but it's definitely the kind of game changer that promises to deliver.

The "A Ministry of Peculiar Occurrences" series is turning out to be a ton of fun. I wasn't familiar with steam punk beyond the name before I chose the first of these novels, and was a bit hesitant. I took a chance and am glad I did. What a hoot! Lots of mechanical marvels, a daring heroine, a dashing hero, and a heart racing mystery. If you're looking for a serious novel with serious "meaning of life" issues, you're in the wrong place. If you're looking for light diversion with extraodinary creativity, this is it.

Another amazing and suspenseful adventure

In the Janus Affair, we once again join the duo of Eliza Braun and Wellington Books, officers at the Ministry of Peculiar Occurrences in Britain. It was a fantastic ride filled with murder, missing people and revelations. They are traveling home aboard Britain’s latest hypersteam train when the hair rises on her back of their necks. A woman of Eliza’s acquaintance vanishes before their eyes in a bright bolt of lightning. Eliza and Wellington are stunned, but back in the archives they find this strange occurrence is happening all over.

I love this duo, from their banter to wit. Their personalities blend wonderfully. She loses her restraint, he keeps her in check. When they discover someone at the ministry is burying these missing cases in the archives that they must solve the case. From Woman fighting for Suffrage to an old flame of Eliza’s showing up the tale is suspenseful, with the most creative characters. While we have privy to the growing feelings developing between our heroes…they are suddenly beginning to release it themselves. It was delicious being in their minds as they worked it out.

Ballentine and Morris have a creative imaginations and it’s all in the details. I love the inventions, the diabolic plot and the language. James Langton is once again the narrator, and I enjoy his rendition. He brilliantly brings out Wellingtons stuffiness and Eliza’s snark. Through tone and inflection, he helps create the mood, ratchet up the tension and his narration for the villains, ex-lover and superiors at the ministry was spot on.

The Janus Affair was another excellent addition in the Ministry of Peculiar Occurrences series. Fans of steampunk, banter and mystery will delight in the adventures of Wellington and Eliza.

If you could sum up The Janus Affair in three words, what would they be?

What was one of the most memorable moments of The Janus Affair?

The moment when Wellington's marksmanship became known by Eliza.

Have you listened to any of James Langton’s other performances before? How does this one compare?

Mr. Langton's performance on this series is great.

Who was the most memorable character of The Janus Affair and why?

Tough call... Wellington and Eliza are both incredible.

This is a great series.

What did you love best about The Janus Affair?

This is a very strong sequel, certainly equal if not better than the first. I enjoyed that there were even more steampunk inventions and more from agent Books. I again loved the narration by Langton. I loved it so much I listened to it in one day.

I am hooked on MoPO.

Another enjoyable romp from the pens of Pip Ballantine & Tee Morris but for me this one didn't quite live up to it's predecessor.

There is quite a good back story behind the main plot featuring Wellington & I will certainly listen to book 3.

A great recording thoroughly believable with good characterisation in the accents and timing. The story, however, requires the total annihilation of belief not just its suspension - set in a re-imagined late Victorian London with a mis-matched couple fighting the bad guys (well, actually bad gals) and each other not to mention their boss ( a Victorian proto-M to their composite proto-Bond with a conscience) and the not-so-innocent bystanders.

If you are so far into fantasy fiction that you can suspend disbelief but not so far as losing touch with humanity then this is a good book well read and addictive enough to make you want the next in the series.

Steampunk at it's best!

Once or twice James Langton gets his accents confused, but otherwise he does a glorious job of bringing the story to life. None of his accents jarred my ear (unlike attempts by others) and the story moved with a nice pace.

A cracking part 2 and a great step forward in the development of the archivist and the pepper pot.

loved the twists and turns of this adventure, loved the narration and voices of the characters.
shame things change with next book, not sure whether I'll get it or not. it's very different having someone else's take on the characters voices.

Where is the next audiobook?

I loved this book and the characters but I wish audible had all the books and not skip the next two. I live in Sweden so I will have to wait for the two books to arrive by slow mail.

About as expected from the previous book

What would have made The Janus Affair better?

Editing out the plethora of Amercan terms used in the supposedly English setting.

Highly predictable it was only a matter of where in the series it would happen.

What does James Langton bring to the story that you wouldn’t experience if you had only read the book?

If you could play editor, what scene or scenes would you have cut from The Janus Affair?

I listened to this one ony because I'd already bought it. The first book wasn't encouraging - one of the main protagonists was written as very unlikeable which put me off - that character has improved (although it took far too long to show her redeeming features) but the supposedly English setting is spoiled by the number of American terms used (sidewalk instead of pavement, vest instead of waistcoat etc.) and everyday Americanisms (calling the ground floor the first floor, and the first floor the second floor, etc.) which is something that jarred and spoiled the flow of the story.

A good follow on to book one. A little drawn out in the centre but still enjoyable

Perhaps I am too pedantic but the title seemed divorced from the story - OK, it referred to the twins, an unsubtle and ancient twist which seems lazy,

Overall the book series is enjoyable enough but rather slow. I wanted to slap Books and Braun (did you spot the 'clever' device? Your character's character summed up in their name). Two books into 'The Ministry of Unlikely Plots' and they kiss! Give me strength!