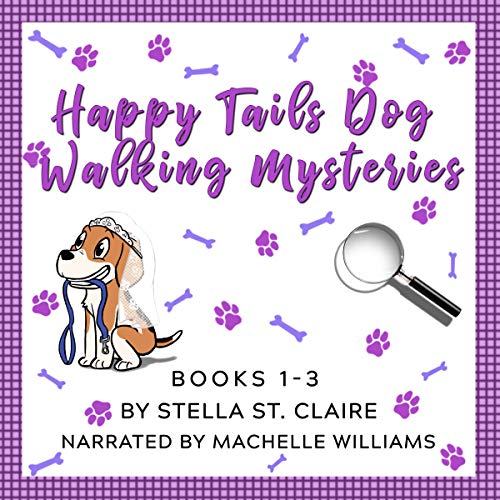 By: Stella St. Claire
Narrated by: Machelle Williams
Try for $0.00

Barking up the Wrong Bakery

Olivia would kill to keep everything just the way it is. She’s got a gorgeous boyfriend, a supportive sister to lean on, and a dog walking business that’s briskly barking away. But just as she’s getting comfortable her sister suddenly wants to buy an entire brownstone with her and her boyfriend looks like he’s going to pop the question at every opportunity.

What Olivia needs is a distraction and she’s found one in stumbling upon Yvette Dunn dead in her coffee foodtruck - drowned in a vat of fresh coffee. Olivia is forced to dig in deeper when it looks like her sister could be involved in Yvette’s death.

Olivia is running out of time...She’s going to have to solve all three problems - and quick - or face a future most foul.

Till Death do us Bark

Olivia is on the warpath of wedding planning. She’s ticking off her tasks rapid fire: flowers, food, and fireworks; all are checked off just in time for Andrew to get hit writing a big check of his own. He’s beginning to get suspicious of her motives, since his blushing bride has gone from dragging her feet on a proposal, to suddenly running down the aisle.

Olivia doesn’t want to admit that she’s trying to get hitched before her cold feet get the best of her. Instead she leans heavily on her super strict wedding planner, Lacy McBride, to keep her eye on the prize. But when Olivia stumbles upon Lacy dead in the middle of a mock reception table, cake fork in hand, she feels her safety net evaporating.

Now, Olivia must shift her attention from planning the event to solving the crime to clear her name. Not because she’s a suspect, but because of “The Bride’s Curse”...No wedding planner in Lexingburg will work with Olivia until the crime’s origins are clear. However, the deeper she falls into Lacy’s mystery the more Olivia sees that wedding planning can be murder....

One Bark and Stormy Prom Night

In the wake of her relationship’s break, Olivia is beginning to fear that she might grow old with only Goodwin and a pack of dogs by her side. But even the unconditional love of puppies can’t shield Olivia from the single most important event in Lexingburg's social calendar: Prom.

Olivia’s friend, and the owner of a boutique dog food brand has been killed at her warehouse - bludgeoned with a side of beef. Olivia stumbles upon the main murder suspect acting suspicious. She sees this as a sign. If she can’t solve her romantic problems she can solve the murder of her good friend.

Now, Olivia finds herself in an ever more tangled web of lies, secrets, and jealousy both recent and decades old. Who knew that dog food could cause as much drama as a high school dance? But the further Olivia wades into the crime the more she realizes that Prom isn’t just the main event of the season - it’s motivation for murder....

This is an excellent series. It has a great combination of mystery, murder, suspense, humor and drama. The narrator does a great job of reading these books.

Small Town Living Can Be Deadly

Dog walker and doggie daycare owner Olivia just stop discovering dead bodies in this series of cozy mysteries with a canine connection. She's a bit of a clutz but surrounded by her sister, her best friend and her sometimes boyfriend, she stumbles her way through three different murder investigations with the kind of dogged (pun intended) determination, intuition and dumb luck that makes her a joy to read about. Toss in a little romance, a lot of family drama and a small town cast with all the quirks and foibles you'd expect and this Stella St. Claire series is a delight to read.

The Happy Tails Dog Walking Mysteries Series is a great value, since you get the first three books in the series for one credit. I enjoyed the mysteries greatly, and I really liked most of the characters. The main character, Olivia owns her own business for walking dogs. This profession leads to several funny moments, especially since her dog Goodwin gets up to all kinds of mischief and tries to get his fellow dogs to join the action. The author sprinkles in snippets from a fictitious mystery series to which Olivia is addicted at the beginning of chapters throughout the books, and it is after this amateur detective Rose that Olivia styles her own amateur investigations. In book order, Olivia solves the murder of a coffee truck owner, the murder of her wedding planner, and the murder of one of her good friends. She is joined in her investigations - very reluctantly - by her boyfriend Andrew, her best friend Jackie, and her sister Janelle. All of these characters added to my enjoyment of the mysteries, and it is really only Olivia to whom I could not warm up. She is one of those people that is constantly pushing away the people in her life, but she suddenly appreciates them and wants them back when she succeeds in driving them away. If you can ignore that particular character flaw, then these books are a good listen.

Machelle William does a good job with the narration. She doesn't differentiate overly between characters, but she has a smooth, easy going delivery that suites the cozy nature of the stories. I like that she narrates all three books in the series, and I would listen to another of her performances in the future.

I Want to be a PI Dog Walker Now!

This was a great set of books. I have already purchased the next box set in the series so I can keep on listening. The books are cute, and fun, and kind of funny. I love how her friends and family get involved in her investigations with her. It adds a whole new element to the general cozy mystery genre. I'm looking forward to seeing how Olivia's life works out in the next book series set. Her relationship with Andrew certainly has me wondering what's next. If you're on the fence about this series and you love cozy mysteries, then go for it. It's definitely worth the use of a credit for this series. I received this book at no charge at my request from Audiobook Boom in exchange for my honest opinion of the book. Oh, and I almost forgot, Machelle Williams is a great narrator. Lots of inflection and very distinctive voices. She was great to listen to.

The first three books in this cozy mystery series are a great listen. Olivia finds herself in situations that help her to grow as a person and to take charge of her life. Solving the mysteries is a nice bonus.

I look forward to seeing where Stella St. Claire takes this series, and I’m happy to see that Machelle Williams continues to narrate.

Olivia is a dogwalker and takes her job seriously even though it seems that the dogs run over her. She's been dating Andrew for a year and has figured out, through some hints here and there, that he's set to propose. Then on a walk with Andrew and a few dogs she comes upon a body. In trying to avoid several things bothering her she takes to investigating.
With one case under her belt she throws herself into planning her wedding. Only she goes over the top and this causes some issues with Andrew. Then her wedding planner is murdered. Now she's on the case once again.
Then prom season hits and murder happens once again.
These three stories are a fantastic audio to listen to and the narrator is fantastic in her narration. Her voice is soothing and draws you into the story.
Fantastic audio to listen to.

This collection includes the first three books in The Happy Tails Dog Walking Mysteries series. These are cute, easy going cozy mysteries focused mostly on Olivia Rickard who runs a dog walking service. While the mysteries in each of the stories were fairly entertaining and well crafted, I did have a few issues with the books. The biggest one came from the transition of book one to book two. Andrew, Olivia's boyfriend that we meet and get to know fairly well in the first book, feels like a completely different character in the second/third book. In the first book he is Mr. Niceguy, but suddenly in book two he comes off as an angry jerk. Seriously, he was a totally different character and it was hard to adjust to his new abrasive personality. That being said, I still found myself pulling for them as a couple. My other issue was with Machelle Williams' narration. For the most part she was okay, not great but not horrible, but I thought she made some odd choices when it came to certain characters, the most glaring being Olivia's best friend who for some reason sounds like she's a Valley Girl from the 80s. It doesn't ruin the books, but it's noticeable enough that I groaned anytime the character was in a scene.

Overall it's a cute series.

I was given a free review copy of this audiobook at my request and have voluntarily left this unbiased review.

Really enjoyed listening to this. Loved all the dogs. They made me smile. Olivia struggles with deciding if major decisions are right. This leads to some funny/sad situations with her avoiding them. The story draws you in and you have to keep on listening to see what happens. The mystery/murders are intriguing and play out alongside Olivia life. Definitely recommend.