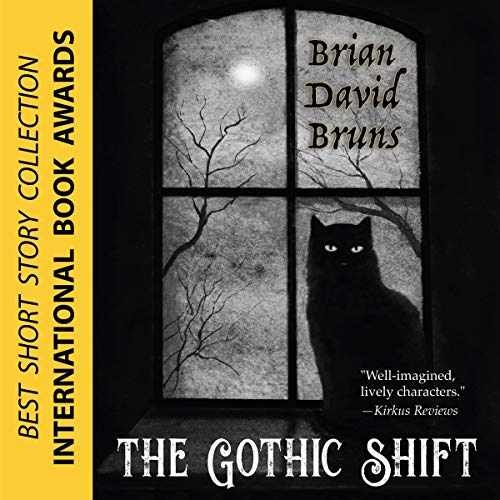 Winner of the International Book Awards for Best Short Story Collection, The Gothic Shift is a beguiling collection of the macabre and supernatural from best-seller Brian David Bruns.

"The Gothic Shift" begins with a man who comes into a restaurant every day to gulp down vast quantities at the shrimp buffet, while his forlorn waitress seems to gain weight on his behalf. Here Bruns achieves a delightful balance of whimsy and the grotesque, with a glimmer of moonstruck romance.

"The Finger People" is a fine study of Civil War squalor and carnage - spotlights the Union attack on the Confederate stronghold Fort Henry. A timid rebel cook discovers something even grislier than the usual horrors of war: ghouls feeding off the dead...and the living.

"The Ghost of Naked Molly" takes us back to old New Orleans on the eve of the Louisiana Purchase, where the ghost of a gorgeous octoroon slave mistress complicates the political schemes of a local grandee by parading around his house in the nude.

"The Penultimate Mr. Nilly" visits the crew of a ship stuck in the Arctic ice in 1859 as they slowly go mad from hunger. The ultimate solution - prompted by a stitched, velveteen toy wolf - gives a completely new twist on survival of the fittest.

What listeners say about The Gothic Shift

Not a fan of long, drawn out stories, but maybe short and sweet is up your alley? These four stories are short, but they are anything but sweet! Bruns shares four incredibly peculiar and fascinating short tales that will have readers begging for more. While not necessarily seeming to be horror, imagine the Stephen King era of writing and you can definitely apply that type of thinking to these four stories. Now, they would probably be classified more as thrillers or supernatural suspense instead of horror, but that is due to the ever-changing need to be bigger, badder, creepier, and scarier. The four stories that belong to The Gothic Shift are The Ghost of Naked Molly, The Gothic Shift, The Finger People, and The Penultimate Mr. Nilly. With The Ghost of Naked Molly, the reader is taken into historic New Orleans, where a man finds his residence hiding very big secrets, including the one and only Naked Molly. She comes and goes, leaving breadcrumbs in her wake of why she is still tethered to haunt his mansion. Bringing some powerful men in and out of the mansion and making deals that will set New Orleans in the race to power is how he meets Horace. Horace, an old geyser, becomes obsessed with Molly and attempts to get into Diego’s good graces enough that he may have a shot to bed Molly. Diego, knowing that it can only end up one way, desperately tries to prevent Horace’s death and in turn, prevent his own, but have the cards already been dealt for them both? Reading The Gothic Shift, you are immediately wondering why this name fits this story. While it is never blatantly obvious, it is clever at best. In this short tale, a young woman waitresses so that she can earn enough and leave the lowly life that she has to become an actress. After noticing a kind gentleman who has made an appearance at her uncle’s restaurant, only to eat an absorbent amount of shrimp, she becomes consumed with this man. Why does he keep coming in and piling up on the shrimp? Physically gaining weight for the first half of the month, she finds him fascinating and repulsive at the same time. How would a man have this much time on his hands to sit there day in and day out, eating so much shrimp. Then, as if by magic, the man starts to lose the weight and the more consumed she is by this man, the more weight she gains. What will happen to her if this man continues to plague her existence? Should they stop selling shrimp so he can’t come in? How will she hide the monstrosity of everything that she has become over just two weeks? The Finger People (Swamp Hive) was a bit confusing at first, but does actually get a little more horrific than The Ghost of Naked Molly and The Gothic Shift. Frank looks up to only one man, his life saver, as they are led into war, the American Civil War, that is. Jimmy is the man that Frank idolizes and when Jimmy comes to him needing help, Frank is right there offering his assistance. This time, something is different though. These people they face are just soldiers, but the ones that come out after a day of death among the fields, these are different. They may not even be people at all. These people make the war seem easy to fight against. How will Frank get out of this predicament and more importantly, how will he get Jimmy out? The Penultimate Mr. Nilly is the final short story, taking the reader onto the Blue Caribou and what a ship this one is – that has been cursed, per say. In the mid 1850s, the Arctic is dank, cold, dark, and by far hopeless. The men aboard have to face terrible disease and starvation, but when their captain passes, if just becomes almost unbearable. One man takes it upon himself to lead this crew out of the depths of despair, but little does he know that his madness is just rising to the surface. Something has taken a hold of him and doesn’t seem to want to let go until it has claimed his life and the life of the men he wanted to save. This one will remind readers of The Shining by Stephen King, with the slow descent into madness being prevalent in this story. Overall, the narrators were successful in filling each story with mirth and suspense. Readers will have four seemingly well-written short stories to choose from for their favorite and all of them have a different twist. This ignites creativity and ensures the reader will not get bored easily. If you are a reader of short stories and supernatural suspense and thriller genres, you may find these to be to your liking. An audiobook was provided to Turning Another Page by Audiobookworm Promotions and in no way affects the honesty of this review. We provide a four-star rating to The Gothic Shift by Brian David Bruns.

The Gothic Shift is a perfect slow burn story collection for the Halloween season. Each tale builds the suspense leading up to the final, sometimes surprising, horror. There are 4 tales contained in this book but I’m a little confused at the title for each story – Audible has one set of story titles and GoodReads has another. Story 1: The Ghost of Naked Molly. Story 2: Wax and Wayne (aka The Gothic Shift). Story 3: The Swamp Hive (aka The Finger People). Story 4: Blue Caribou (aka The Penultimate Mr. Nilly). My two favorites were The Ghost of Naked Molly and The Swamp Hive. I felt The Ghost of Naked Molly really captured the American Gothic horror tale. Part ghost story, part historical fiction, the story really does a great job building the suspense. Set in New Orleans in 1799, the city is in transition. Many of the rich and powerful are wondering who will end up controlling the city. Plenty of backroom deals have been made over the years by these rich men who are trying to retain property, wealth, and power. While the story puts a lot of emphasis on Molly’s sexuality, she’s also a mysterious and powerful figure. I liked that the men who would continue to use her don’t get what they expect. Ha! The Swamp Hive was really intriguing. While I was sucked into this tale right away, I really had no idea where it was going. I love being surprised! Set during the American Civil War, Frank owes his life and current station in the military to Jimmy, who is something of a local hero. Frank is driven to face his numerous fears and do what he can to help Jimmy out. I did not see that coming! I don’t want to spoil it so just know it was deliciously creepy and somewhat alien. Wax an Wayne didn’t do much for me. Set in modern times, it involves a buffet with lots and lots of shrimp. Fat and skinny are the strong themes in this book. Most of the characters were whiny and that is what turned me off of this particular story. The waitress focuses a lot on her looks (no matter her size) as does her own body-obsessed boyfriend. In the end, I think I missed the point as I left this story feeling like it needed a little something more to make sense. Blue Caribou was good but not stellar. I do love a good survival story and this one is set in the Arctic in the mid-1850s. It’s dark, cold, and the crew can’t expect assistance any time soon. A bit of luck provides some seal meat but the crew is starting to suffer from scurvy. This was a fun little tale even though it wasn’t my favorite. All told, there are very few women in this story collection. There’s Naked Molly (and we get to hear all about her nipples several times), a sick house slave, and a whiny waitress. I would have liked to see more female characters since women are everywhere. Besides that, this audiobook was a delightful way to spend a day as I decorate for Halloween. 4/5 stars. The Narration: Scott Bennett, Brittany Morgan Williams, Thomas Stone, & Gary Furlong really brought these tale to life. Each one did a great job. Bennett was great at French and Spanish accents as well as being a senior citizen with way too many lascivious thoughts. Williams played a whiny and figure-obsessed waitress quite well. I loved how she captured the steroid-popping boyfriend to a T. Stone was magnificent as Frank (who is a little mentally challenged). Furlong (who I have enjoyed on other audiobooks) brought his quality performance to this Arctic story. The pacing was perfect and there were no technical issues with the recordings. I was impressed that the volume from story to story didn’t vary, as so often happens with individual recordings. 5/5 stars. I received this audiobook as part of my participation in a blog tour with Audiobookworm Promotions. The tour is being sponsored by Brian David Bruns. The gifting of this audiobook did not affect my opinion of it.

Dip your toe into the macabre

The Gothic Shift is a collection of some creepy tales. I found them to be fun stories. My favorite was The Ghost of Naked Molly, which is set in late eighteenth century New Orleans. I had the pleasure of listening to the audible version of the book. There are four narrators: Scott Bennett, Brittany Morgan Williams, Thomas Stone, Gary Furlong. Each one did a fabulous job bringing the terrifying stories to life. I am giving The Gothic Shift four stars. I would recommend this book for readers who enjoy disturbing, frightening, ghoulish and weird tales. It is a perfect fit for Halloween reading. I received this book from the publisher. This review is 100% my own honest opinion.