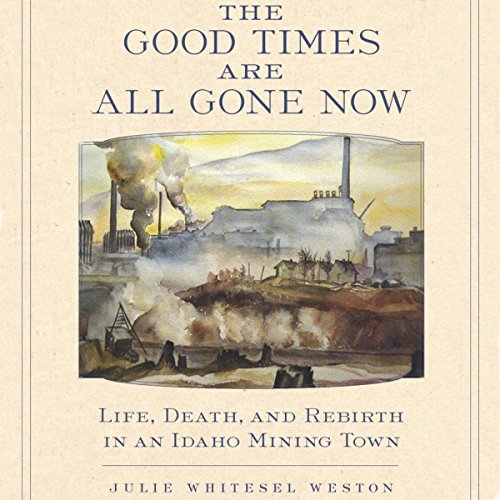 The Good Times Are All Gone Now

By: Julie Whitesel Weston
Narrated by: Cindy Piller
Try for $0.00

Julie Whitesel Weston left her hometown of Kellogg, Idaho, but eventually it pulled her back.

Kellogg in the late 1940s and 50s was a typical American small town complete with high school football and basketball teams, marching band, and anti-Communist clubs; yet its bars, gambling dens, and brothels were entrenched holdovers from a rowdier frontier past. The Bunker Hill Mining Company, the largest employer, paid miners good wages for difficult, dangerous work, while the quest for lead, silver, and zinc denuded the mountainsides and laced the soil and water with contaminants.

Much of this memoir of place set during the Cold War and post-McCarthyism is told through their voices. But Weston also considers how certain people made a difference in her life, especially her band director, her ski coach, and an attorney she worked for during a major strike. She also explores her charged relationship with her father, a hardworking doctor revered in the community for his dedication but feared at home for his drinking and rages.

The Good Times Are All Gone Now begins the day the smokestacks came down, and it reaches far back into collective and personal memory to understand a way of life now gone.

"This unflinching and beautifully written memoir of place, in which Weston recreates that hustle and bustle, draws a compelling portrait of the town she knew and the people who animated it, from miners and labor agitators to lawyers, women's clubs to whorehouses." ( Story Circle Book Reviews)
"Weston's insights are unforgettable; her writing is wonderful." (Mary Clearman Blew author of Balsamroot: A Memoir)
"This is a book full of love and tragedy, told in beautiful, caring, heartbreaking language." (John Rember author of Traplines: Coming Home to Sawtooth Valley)

What listeners say about The Good Times Are All Gone Now

The author strikes a good balance of her personal history with a history of the town and its people.

Which character – as performed by Cindy Piller – was your favorite?

This is a non fiction book.

This is the first non-fiction book I've heard Ms Piller read and I think it's her best. From time to time, I forgot that I was not listening to the author herself as a character in her own story. Ms Piller embodied the author and made the story personal, entertaining, and unexpectedly entertaining.