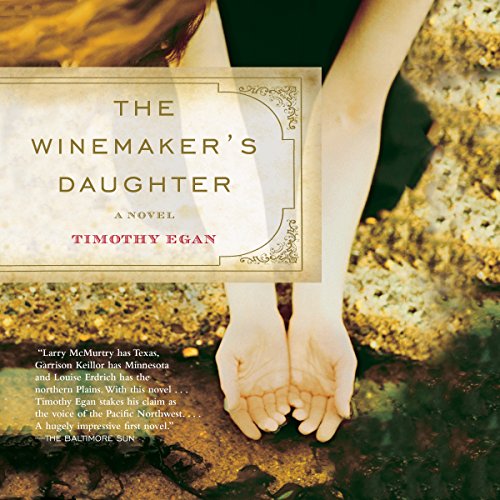 By: Timothy Egan
Narrated by: Cassandra Campbell
Try for $0.00

Pulitzer Prize-winning New York Times national correspondent Timothy Egan turns to fiction with The Winemaker's Daughter, a lyrical and gripping novel about the harsh realities and ecological challenges of turning water into wine.

When Brunella Cartolano visits her father on the family vineyard in the basin of the Cascade Mountains, she's shocked by the devastation caused by a four-year drought. Passionate about the Pacific Northwest ecology, Brunella, a cultural impact analyst, is embroiled in a battle to save the Seattle waterfront from redevelopment and to preserve a fisherman's livelihood. But when a tragedy among fire-jumpers results from a failure of the water supply - her brother Niccolo is among those lost - Brunella finds herself with another mission: to find out who is sabotaging the area's water supply. Joining forces with a Native American Forest Ranger, she discovers deep rifts rooted in the region's complicated history, and tries to save her father's vineyard from drying up for good...even as violence and corruption erupt around her.

What listeners say about The Winemaker's Daughter

Obviously Not Read By A Washington Resident

This only work of fiction by Egan is okay -- his non-fiction work is better. But what really makes me mad is that the reader -- Cassandra Campbell -- doesn't pronounce many of the place-names in the book correctly: Chelan, Inchelium, Nespelem, and Colville; just to name a few. If a book is worth converting from the written word to audio, you'd think that the producer or author would ensure that pronunciations are done correctly. Besides that, some of the fire-fighting techniques used in the book are questionable, and the hydrology is unscientific. Come on Timothy! You can do better!

Aside from some foul language, an excellent story. I loved the imagery of the countryside.

I like the premise of the story however, didn't really need all of the sexual content and I find it disappointing when I figured out the end well before I get to the end.