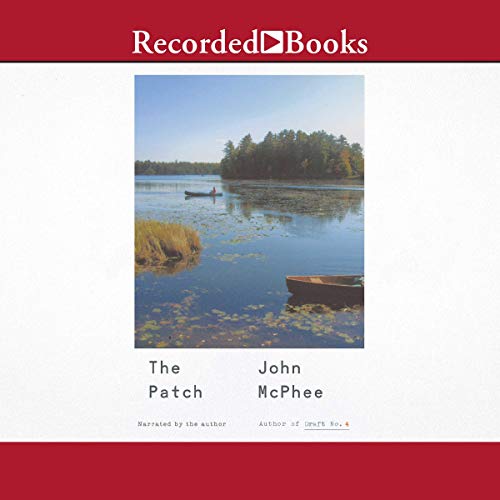 An "album quilt", an artful assortment of nonfiction writings by John McPhee that have not previously appeared in any book.

The Patch is the seventh collection of essays by the nonfiction master. It is divided into two parts.

Part 1, "The Sporting Scene", consists of pieces on fishing, football, golf, and lacrosse - from fly casting for chain pickerel in fall in New Hampshire to walking the links land of St. Andrews at an Open Championship.

Part 2, called "An Album Quilt", is a montage of fragments of varying length from pieces done across the years that have never appeared in book form - occasional pieces, memorial pieces, reflections, reminiscences, and short items in various magazines including The New Yorker. They range from a visit to the Hershey chocolate factory to encounters with Oscar Hammerstein, Joan Baez, and Mount Denali.

Emphatically, the author's purpose was not merely to preserve things but to choose passages that might entertain contemporary listeners. Starting with 250,000 words, he gradually threw out 75 percent of them and randomly assembled the remaining fragments as "An Album Quilt". Among other things, it is a covert memoir.

What listeners say about The Patch

A thousand details add up to one impression

A thousand details add up to one impression.
-- Cary Grant, quoted in John McPhee's 'The Patch'

...an interloper [at Princeton], a fake professor, a portfolio without minister.
-- Robert Fagles & Robert Hollander, both describing John McPhee

In my Goodreads "About Me" I'm pretty blunt:

I won't review your self-published book. I promise. Even if your book is published by a traditional publishing house (Penguin, etc), I'm not going to read and review it UNLESS I've read you before (most likely). If your name is Thomas Pynchon, Don DeLillo, John le Carré, Robert Caro, John McPhee, etc., sure... PLEASE send me ALL your books. I'm totally game. Otherwise, you are just wasting both of our time.

That usually scares away most self-published prose pimps, but the other day I landed a REAL fish. Someone at Farrar, Straus and Giroux sent me a quick note complimenting me (I'm a whore for compliments) AND asking if I wanted a soon-to-be-published book by John McPhee to read, enjoy, and yes ... perhaps ... review?

My kids would tell you that in a choice between meeting John McPhee and God, I'd be hard pressed to choose, because to me John McPhee IS GOD. So, of course I took the book. I got it a couple days ago and just finished it today.

Lovely. The book is essentially a memoir, told through prose patches and resurrected scratches. Pieces that have been overlooked or published and never reprinted were culled, edited, and sewn together (at 87, there is a lot of past prose to examine). Part I of the book contains six sporting essays that range from fishing for pickerel in New Hampshire (The Patch), to chasing errant golf balls (The Orange Trooper), to golf at St. Andrews (Linksland and Bottle), to coach Bill Tierney (Princeton's and later Denver's) championship lacrosse coach (Pioneer). Part II is essentially a variety of small pieces (some just a paragraph, others several pages) that seem random. They span McPhee's interests from people, to places, to science, and errata. It is only as these patches come together that you begin to realize McPhee is essentially taking you on a trip through his memory as a writer, a father, and a person. McPhee's talent as a writer bubbles up, but so too does McPhee's essential humanity. His narrative nonfiction informs most good and almost all the great nonfiction writers currently making a living with words. He, along with Tom Wolfe, Gay Talese, helped popularize New Journalism. His books are curiosity distilled with patience through literary prose along with a unique ability to observe the the key person in the perfect place at the right time. In this book McPhee is showing you a quilt that slowly grows into McPhee. It is a love note to his family (the book is dedicated to his 10 grandchildren) and most certainly to his readers and fans.

The amount of goodwill that McPhee has garnered with me through thousands of pages of beautiful writing means that I will happily read his detailed account of a telescoping golf ball retriever. Glad to see McPhee getting weird in his golden years.

One of a kind

John McPhee narrating his own writing is a special treat given the match between the precision of his writing and the slightly casual but still precise reading voice. His telling of stories about athletes, especially golfers and lacrosse players, is pure fun.

The writing, as usual was excellent but much of the material is dated. The book could have been expanded with updates on several stories.

A hodge-podge of never-before-collected pieces

The Patch is a deliberate hodge-podge of pieces never before collected in book form. The book is divided into two parts, the first centered around sports, and the second a patchwork of writing over the decades. What I loved about the book is the diversity of pieces contained within. From fishing for pickerel, to the best techniques for finding golf balls on or near golf courses; from bears roaming New Jersey to a profile of Cary Grant. There is a little of everything here.