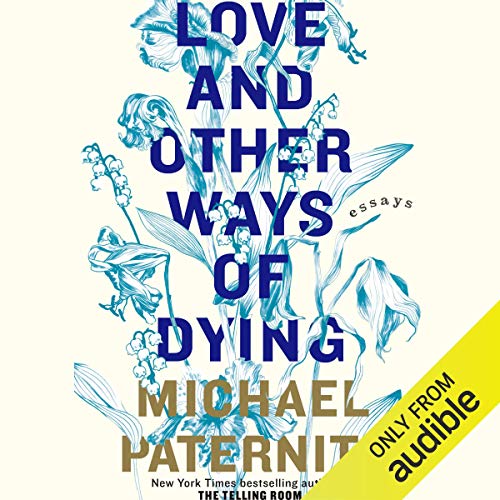 Love and Other Ways of Dying

By: Michael Paterniti
Narrated by: Richard Poe
Try for $0.00

In this moving, lyrical, and ultimately uplifting collection of essays, Michael Paterniti turns a keen eye on the full range of human experience, introducing us to an unforgettable cast of everyday people. Michael Paterniti is one of the most original and empathic storytellers working today. His writing has been described as "humane, devastating, and beautiful" by Elizabeth Gilbert, "spellbinding" by Anthony Doerr, and "expansive and joyful" by George Saunders.

In the 17 wide-ranging essays collected for the first time in Love and Other Ways of Dying, he brings his full literary powers to bear, pondering happiness and grief, memory and the redemptive power of human connection. In the remote Ukranian countryside, Paterniti picks apples (and faces mortality) with a real-life giant; in Nanjing, China, he confronts a distraught jumper on a suicide bridge; in Dodge City, Kansas, he takes up residence at a roadside hotel and sees, firsthand, the ways in which the racial divide turns neighbor against neighbor. In each instance Paterniti illuminates the full spectrum of human experience, introducing us to unforgettable everyday people and bygone legends, exploring the big ideas and emotions that move us.

Paterniti reenacts François Mitterrand's last meal in a rustic dining room in France and drives across America with Albert Einstein's brain in the trunk of his rental car, floating in a Tupperware container. He delves with heartbreaking detail into the aftermath of a plane crash off the coast of Nova Scotia, an earthquake in Haiti, and a tsunami in Japan - and, in searing swirls of language, unearths the complicated, hidden truths these moments of extremity teach us about our ability to endure and to love.

Michael Paterniti has spent the past two decades grappling with some of our most powerful subjects and incomprehensible events, taking an unflinching point of view that seeks to edify as it resists easy answers.

"With thoughtful and practiced pacing, Poe gives additional impact to a work that ponders the human condition in far-flung places around the globe." (AudioFile)
"Michael Paterniti is a genius." (Elizabeth Gilbert, author of The Signature of All Things)
"Michael Paterniti is one of the best living practitioners of the art of literary journalism, able to fully elucidate and humanize the everyday and the epic. In his hands, every subject, every moment of personal or global upheaval, is treated with the same curiosity, respect, empathy, and clear-eyed wisdom." (Dave Eggers, author of The Circle)

What listeners say about Love and Other Ways of Dying

If you could sum up Love and Other Ways of Dying in three words, what would they be?

Each vignette is told in such detail without seeming trite or embellished. His voice is so sincere and respectful of everyone. Every person's humanity is teased out, regardless of how strange we find their actions to be. Amazing narration throughout.

The writing of these essays brings out the human side of stories we all know and have heard in the news. The performance is energized with understanding and pace that brings the stories to life.

Such interesting topics for stories.

One of the great long-form writers of our day. Michael Paterniti chooses topics off the beaten track and writes them with great knowledge and a nostalgic air. He has certainly made me cry and laugh. The audio performance is perfect for this book.

I really enjoyed several of the essays in this book. However, there were also some where I found myself drifting away. In all fairness, I may have had a unrealistically high standard because of all the accolades this book received. What I will say, though, is the author does an absolutely beautiful job with imagery in this book.

This book was written beautifully and read very well. Itwas packed full of macabre and emotive impressions. The subject matter was at times a little boring, other times a bit disturbing and most of the time took me on lots of fascinating little journeys