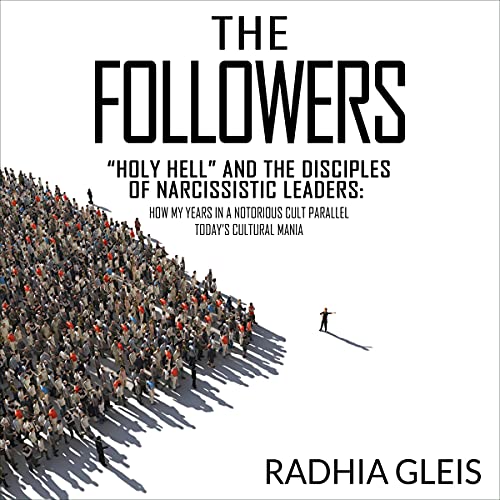 Radhia’s personal story and comprehensive knowledge along with her authentic, and unfiltered humorous style presents a compelling portrayal of both the political and cultural dynamics of group-think and mind control.

After 25 years of her adult life in a cult under the influence of a narcissistic sociopath, she sought to understand why she made the choices she made in her life, so she could better understand why others make their choices. The Holocaust or any genocide instigated by a narcissistic authority, does not happen because of one man. It is the collective consciousness of their followers that supports and enacts those atrocities.

Like Moonies under Sun Myung Moon, Germans under the influence of Hitler, or the Branch Davidians under David Koresh, a percentage of America has fallen into a cult of personality. Radhia set out on a journey to explore common traits that every human being possesses. She makes the strong parallels between her devotion to a cult leader - an authority - whose damaging behavior and influence she willfully ignored, and the followers of other authoritarian leaders. This is not about policy or political ideology or even the guru or our political leaders, as much as it is about the followers from the viewpoint of a follower.

"Written from the perspective of an insider, this compelling personal story, told with both brutal honesty, and raw humor draws us into the mindset of cult followers. It shines a light on how easily intelligent questing people can find themselves unwittingly following a cult leader. As much a personal story as a probing exploration of the mental and emotional states of cult leaders and followers, this fascinating book is hard to put down." (Lorell Frysh, PhD)

What listeners say about The Followers

When people I knew and respected voted for Trump and I saw how they were speaking about him I also came to the conclusion that our country was in the grip of a narcissistic cult leader. I stopped liking Trump a long time ago and saw his tendencies during the apprentice. I heard how he spoke about the people of Scotland and knew that he was a narcissist. This book is needed for these times. Everywhere you turn there’s another Group leader promising a better life but delivering instead another way for you to lose your money, your ability to think critically and in some extreme cases your life. I appreciate the use of humor to deal with an otherwise morose topic.

I so enjoyed this book because Radia truly educates the reader with facts not theories. I love history and she shows us how history repeats itself. Brilliant writing.

Loved it! Important book for these times , wonderful narration. So worth the listen, intelligent, vulnerable and compassionate with a twist of humor

A very important work describing the past 5 years of Trumpism. The author has an intimate experience in cult dynamics. Perhaps no one else could really explain Trump and the GOP and where our democracy may be heading.