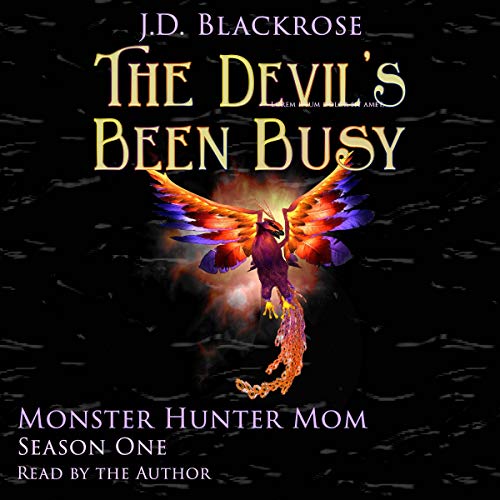 The Devil's Been Busy

Whether it's kitsune running rampant in the museum, were-gorillas rampaging at the zoo, or a cupid wreaking havoc on her daughter's birthday party, Jess Friedman can handle any monster the supernatural community of Cleveland can throw at her.

Except maybe the disapproving stares from the women at her daughter's day care. Or the awkward conversations with her rabbi about her working for the Catholic Church as a New Templar, hunting down the things that go bump in the night.

That's right, Jess Friedman isn't just an ordinary mother of three trying to make it through the world, she's also the official Cleveland Regional Monster Hunter for the Holy Roman Catholic Church (What? You thought Bubba was the only one?). This Jewish mother is anything but stereotypical as she battles demons, tames monsters, negotiates with a vampire lord, and tries to get snacks delivered to her daughter's kindergarten class on time!

The Monster Hunter Mom stories take place in the popular Bubba the Monster Hunter shared universe, along with the escapades of Mark Wojcik, Mason Dixon, Caitlin Kelley, and of course, Bubba himself.

What listeners say about The Devil's Been Busy

Many authors shouldn't narrate, JD is a rare exception. She knows her story better than anyone and thus the character voices. As she progresses through the books she becomes more comfortable with the roll of narrator. my only complaint, if you can call it that, is that periodically there is some background noise, like a furnace coming on. It doesn't distract from the story though.

If you’re looking for monsters, wild crazy adventures, and tongue in cheek pop culture references, this is the book for you. What’s it like to grow up with a monster hunting mom? What’s it like to become a monster hunting mom? Blackrose’s world is over flowing with creatures and puzzles. A practical, quirky, monster fighting mom multitasks her way through her days, culminating in a fantastical battle. I’d say more but I don’t want to spoil any surprises!

what better way to enjoy an entertaining monster hunter story than to listen to the author herself read them to you!

Monster Hunter Mom worthily expands the Bubbaverse (aka New Knights Templar) setting established in the Bubba the Monster Hunter series. Our lead is exactly as described: a monster-hunting mom, and brings to the table everything you could hope to have under that premise. And in the spirit of the Bubbaverse you've got good humor, fast action, likable characters, and intriguing monsters. What's not to love?

I enjoyed this story. The idea is great. I had a few problems with the way things were presented. It seems a little choppy with the presentation of an idea or character from the past. The idea is just thrown in. This particular book is a combo of a number of novellas. I’m not a fan of novellas so I’m glad they were combined and presented in this format. I tend to ignore novellas and would have missed this series. I’m a huge fan of audio books. There is nothing better than a story with a great narrator. The narrator can take an okay book and make it memorable because of their skill. Sometimes I feel as if the narrator believes in and enjoys the story. I didn’t find that love and skill in this story. I was distressed to find the narrator was also the author. There seemed to be a disconnect in the narration. I really think another narrator could have made this a GREAT BOOK. I appreciate the author taking on the expense of an audio version, they aren’t required to make audio versions. However, this was an okay audio version that could have been a FABULOUS book with a different narrator. I am going to look into more of this author’s work. I’m anticipating some good books in my future.

This bundle of four stories was amazing. The author J.D. Blackrose impressed me with her creativity and humour, like what will happen to a gorilla bitten by a were-gorilla? Or is fighting against monsters really more frightening than to face a babysitter? The main character Jess Friedman knows the answer. The danger gets closer and closer to her family and she needs all her skills and allies to protect her loved ones.
It was great to follow her adventures. Her character is bad ass and tough. It fits with her not to show deeper feelings, but I still missed to get some deeper inner thoughts.
The stories are fun and entertaining and combine a lot of fighting and action with the daily struggle to manage a family.
The story is narrated by the author. The voice of J.D. Blackrose fits perfect with the characters and the story.

loved it. Narrator was grate. They just forgot to remove the bloopers in the middle. So one but is repeated. But its worth it!!