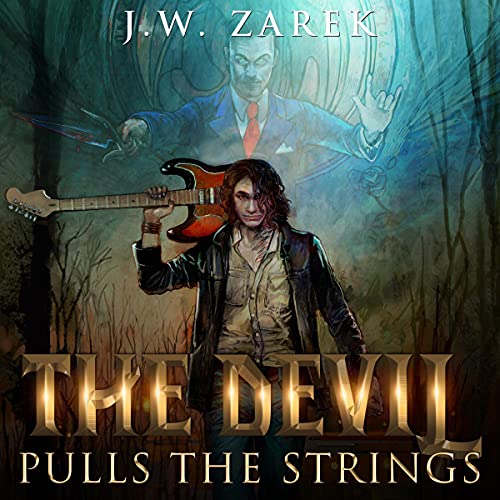 The Devil Pulls the Strings

The Devil Pulls the Strings is the pulse-pounding first tale in the Archivist series.

Twenty-two-year old Boone Daniels has problems, debilitating panic attack, gut-wrenching guilt, a wendigo haunting him since age six, and now he almost killed his best friend in a joust. But when he fills in for his injured friend at a New York gig, he goes to meet the gig’s contact at his NYC brownstone. A body falls from the brownstone balcony and the place explodes with gun fire. Boone barely escapes but uncovers a sinister plot to perform a rare Paganini piece that summons the Devil to trap Baba Yaga and destroy modern-day New York City.

He then finds himself on a race through time, to capture the cursed melody. Along the way, a Romani immortal, steampunk vampires, and Baba Yaga set the stage for war, and Boone shall have to risk death for redemption. All Boone wants is to keep a promise to a friend. The same friend, he almost killed last Sunday during a joust.

Can a small-town Missouri musician outplay the supernatural and save NYC’s soul? If you like when tortured heroes, epic battles, time travel, twisted history, and secret societies collide, then you’ll love J. W. Zarek’s spectacular pause-resister.

What listeners say about The Devil Pulls the Strings

The Devil Pulls the Strings is the first novel in The Archivist Series by best-selling and award-winning author J.W. Zarek. I was immediately drawn into this adventure of epic proportions thanks to the beautiful writing style, the memorable characters, and the superb narration by the extremely talented Curt Bonnem.

Expertly combining twisted history, magical objects, mythical creatures, secret societies, an ancient war, the coming of the apocalypse, and throwing in some time travel just for good measure, The Devil Pulls the Strings will captivate, fascinate and entertain fans of fantasy and music.

The action moves swiftly, the writing is sharp, the dialogs are witty and funny, the characters and the events are vividly described with relevant details, while all this great storytelling is made even better thanks to a superb audio production, complete with sound effects and superb music.

The audiobook version of The Devil Pulls the Strings is brought to life by award-winning, professionally trained multimedia performer, voiceover artist and narrator Curt Bonnem. He reads with passion, he manages to make all these characters feel real and alive by assigning each of them different voices and believable accents – he delivers an absolutely stellar performance all around.

I need to give praise for the haunting music to world-renowned musicians Oleg Bezuglov, Natalia Bezuglova, and Vladimir Gapontsev. This listening experience is made even better, elevated, and enriched thanks to the excellent narration, the superb musical arrangement, and the great sound effects.

So, if you are looking for an epic fantasy audio production that will keep you interested from the first chapter right to the very end, you won’t be disappointed with The Devil Pulls the Strings. I’m really looking forward to seeing what’s next for the extremely promising Archivist Series. But, if this first adventure is a clue, we are in for more excellent novels!