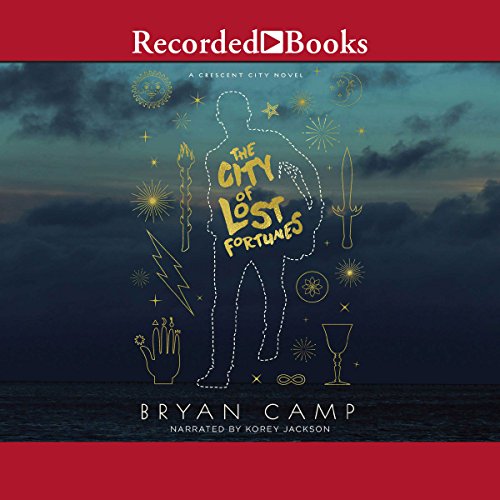 The City of Lost Fortunes

By: Bryan Camp
Narrated by: Korey Jackson
Try for $0.00

The fate of New Orleans rests in the hands of a wayward grifter in this novel of gods, games, and monsters.

The post-Katrina New Orleans of The City of Lost Fortunes is a place haunted by its history and by the hurricane's destruction, a place that is hoping to survive the rebuilding of its present long enough to ensure that it has a future. Street magician Jude Dubuisson is likewise burdened by his past and by the consequences of the storm, because he has a secret: the magical ability to find lost things, a gift passed down to him by the father he has never known - a father who just happens to be more than human.

Jude has been lying low since the storm, which caused so many things to be lost that it played havoc with his magic, and he is hiding from his own power, his divine former employer, and a debt owed to the Fortune god of New Orleans. But his six-year retirement ends abruptly when the Fortune god is murdered and Jude is drawn back into the world he tried so desperately to leave behind.

A world full of magic, monsters, and miracles. A world where he must find out who is responsible for the Fortune god's death, uncover the plot that threatens the city's soul, and discover what his talent for lost things has always been trying to show him: what it means to be his father's son.

What listeners say about The City of Lost Fortunes

I just finished this book. It was an amazing story. The author is very creative and definitely did mounds of research. Some times I felt he did more tell than show, but it did not impact my enjoyment. I think this one is fascinating and if you like crime stories or god stories you should check this one out. If you are a fan of New Orleans, like I am, you will definitely enjoy the story. I have been visiting New Orleans for the last 20 years. I worked relief for my company down there right after Katrina and I saw the changes. This book really plays on that and anyone familiar with the city will understand.

Breath of fresh air in what's become an increasingly stale genre. Brings some wonder back to Urban Fantasy.

such a wonderful book

I absolutely loved the journey and the struggle and the triumph. this was a wonderful book and I recommend it to anyone.

Right off, I'd like to say that getting into this book took focus and attention, but so very very worth setting in and really listening. This book is a luxury limo cruising you through a truly brilliant, exotic multi layered story arc, that has all kinds of New Orleans flash and fancy ... but the bones of the story are where the savor is, the flavor and scent and the suck you in and keep you .. the bones of this novel are diamond-dusted mental dazzle, gods misbehaving, multi-dimensional multi-cultural spiritualism and magic, swirling thru the everyday life of New Orleans.

This novel is thick with magic that can be learned, bought, traded, stolen, or lost playing poker with gods. Bryan Camp has written a rich, steamy, magically flavored gumbo of a novel.

This story really grasped my full attention and kept me wanting to know what would happen next. I normally only listen to audiobooks during car rides to and from work. The mystery, suspense, myth, magic, and plot twists found in “The City of Lost Fortunes” convinced me to put on my headphones at lunch and in the evenings and listen to the next chapter. As a New Orleans native, I especially liked all of the references to the city.