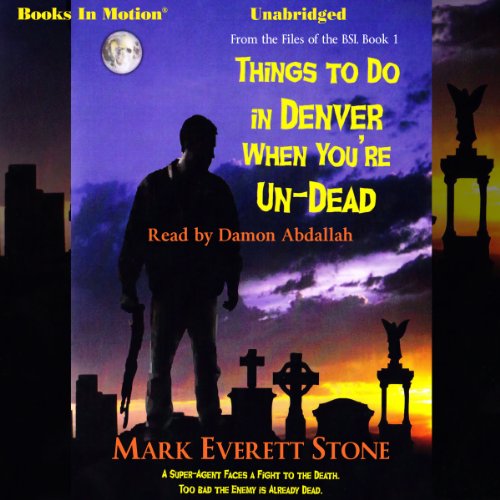 Things to Do in Denver When You're Un-Dead

Things to Do in Denver When You're Un-Dead

For 10 years Kal Hakala has been the Bureau of Supernatural Investigation's top man, the longest surviving agent in its blood-soaked history. The World At Large has no idea that The World Under exists. And its vampires, demons, zombies, and mythic monsters are growing increasingly restless. In all Kal's time with the Bureau, there has been no case he couldn't crack, no monster he couldn't kill.

Then a plague of zombies comes to Denver, along with a vicious serial killer dubbed The Organ Donor. A childhood encounter with a legendary monster has left Kal with an endless supply of rage and hatred for all things Supernatural. But now the target is on his forehead, and the Un-Dead don't die easy. The Bureau has a few aces of its own-a few magicians, a cyber-ghost. Unfortunately Kal is a perennial loner.... And the World Under is wise to his tricks.

Not a Good Book

The summary of the book makes it seem like a lighthearted version of Monster Hunter International or the Joe Ledger Series. It's more like an amateur version. The characters are not particularly likeable. The antagonist is barely memorable. The story is OK but doesnt go in depth. Unlike the Joe Ledger series, the martial arts is not believable, and the science is not well researched. It's the kind of effort that would get a C+ in a college creative writing class.

I wouldn't recommend this book.. The nicest thing I can say about it is that it's not the worst thing I have ever read. I made it all the way through and don't feel like asking for my money back.

I loved this book! Perfectly narrated (more from mr Abdallah, please) and a great story. Couldn't fault it in any way. This is what Audible should be about.

Am eagerly awaiting the rest in the series. Glad I have discovered such a good author and narrator. A fantastic pairing.

Would you listen to Things to Do in Denver When You're Un-Dead again? Why?

Yes, I'll listen to it again in a year or so. This is a great series with plenty of action and characters that are 3 dimensional. These books remind me a lot of the "Monster Hunter International" series except there not quite on the same level as "MHI" but I think that's due to length of the book. Larry Correia's "MHI" series has more time to expand on his character development. Having said that this is still a very well written entertaining book. I guess it's what you might call a "fun" or "beach" book. If you're a fan of "MHI" then definitely get this book! I don't think you'll be disappointed. Hopefully Audible.com will release the other books in the "Files from the BSI" series soon.

What other book might you compare Things to Do in Denver When You're Un-Dead to and why?

As I stated above, I compare this book a lot to the "Monster Hunter International" series. See above for explanation why.

Which character – as performed by Damon Abdallah – was your favorite?

That's easy, the main character, Kal Hakala. Dude's a serious badass and he's got style too! If Kal Hakala was a chick I'd probably screw him!

I wouldn't use a tagline for this movie because it would probably sound stupid. Okay, screw it, how'bout, "There are things that go bump in the night, were the the people that bump back!" I know, stupid, right. And yes, I stole that line from the movie "Hellboy"

Would you listen to Things to Do in Denver When You're Un-Dead again? Why?

Maybe. I'll probably get throught the rest of the series first.

Really liked the backdrop to the story. Took a while for it to unfold, and not real sure about how it will all end, but it was unusual and interesting.

Have you listened to any of Damon Abdallah’s other performances before? How does this one compare?

Really enjoyed DA's performance. I thought he was perfect for this book.

The book started out slow IMO, but after it picked up, I thought the author did a fantastic job of tying a pretty good story with really good characters all together.

Good fun fighting nasties from the world under

What made the experience of listening to Things to Do in Denver When You're Un-Dead the most enjoyable?

an exciting story told with humour and pace

What was one of the most memorable moments of Things to Do in Denver When You're Un-Dead?

we need more of the BSI books on audible theres book 2 "What Happens in Vegas, Dies in Vegas" which continues the story and is equally good - theres 2 more books in the BSI series and looking forward to seeing them on audible