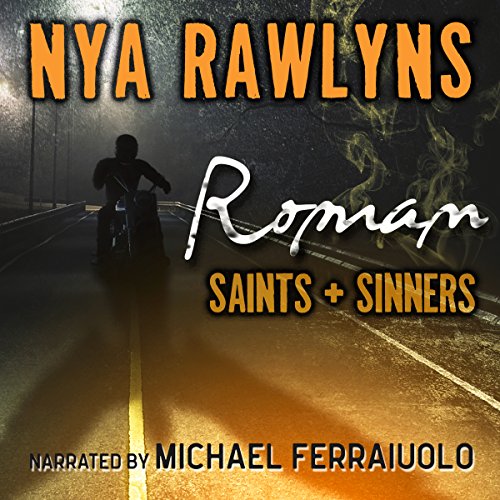 By: Nya Rawlyns
Narrated by: Michael Ferraiuolo
Try for $0.00

With the death of her cold-hearted mother, TJ faces life in a decaying town with a father she barely knows. From a future bright with promise to one stripped of everything she's worked so hard to achieve, TJ needs more than luck in her corner. Roman is trouble, pure and simple-at least that's what everyone keeps telling her. He's a juvenile delinquent with sealed records and a suspicious link to the town's tragic past, but despite all warnings, TJ can't ignore his dark pull. In a coal mining town where lives were once shattered beyond repair, a new evil surfaces, forging strange alliances as both believers and skeptics alike face the inexplicable to save their livelihood, their families and even their faith. Some secrets are worth keeping, some secrets must find the light of day, but in the end… some secrets you take to the grave, no matter what the cost.

What listeners say about Roman (Saints and Sinners)

I have to be honest. It took me a long while to get into this story. I’m not sure why, exactly. At times it was really interesting and other times I felt lost and I think I zoned out or something. The book has a unique storyline and I liked the characters. I definitely wasn’t expecting the ending. Altogether I think it’s a good book.

The narration was pretty good. The narrator has a soothing voice that makes it easy to listen to for long periods of time.

TJ just lost her mother a demanding woman with little love to give. Now she is living with a father she knows little about and her older brother is leaving again her only support, and his parting words are stay away from him. In addition to all of this she is on unfamiliar territory, no friends and has gone from riches to small town rural America with little to no money. She adapts fairly well and made friends with the intellectual crowd and of course Roman the one she was warned to stay away from, but living in the apartment above her fathers business it’s almost impossible to do.
Strange things start happening with no explanation and no answers at the only employer in town the mines.
It seems the only people who have answers are gone, the town priest and Roman.
This story ends with no answers and no explanations and has left me with lots of angst.
Narration was good but not great.

At only five, Teresa is told to choose: not understanding, she said, Mummy, and it was decided. For the next eleven years, until her lawyer mother died of cancer, she lived in comfort but little, if any, love, never seeing her father and only in contact with her older brother who had adored her. Now, at sixteen, she starts her new life far from everything, in a fairly remote mining area, and shabby house of Ben, the father she does not know. It is the home, too, of her beloved brother but he isn't there for her. He is in the military. Instead, he has warned her against the dark eyed, wild seeming youth, Roman, who lives there, a parolee given house room at the request of an uncle, with a strange, frightening intensity. "Stay away from him."

Beautifully written, almost dream like at times despite the very basic situation and Theresa's coming to terms with her new situation, it has a poetic feel to the writings. And there is a paranormal element which begins to unfurl with the story of a mining accident four years before T.J.'s arrival. Not all is explained, but somehow this feels right: everyone sees in a different way. The narration, too, is slightly strange, befitting the storyline. Michael Ferrajuolo reads with a long laconic drawl, clearly intoned and articulated, but downbeat in timbre, adding to the strange quality of the text. His character voicing differentiations are excellent and, although slow, the pace feels appropriate. It can, however, be speeded to 1.25 playback without any deterious effect to understanding of the reader feels it necessary.

I received a complimentary copy of Roman, freely gifted to me at my request from the rights holder, via FAFY. Thank you so much. Before this book I had been unaware of the author, Nya Rawlins and am now encouraged to try another on the strength of this story. Roman had a strangeness to it unlike most paranormal books that I have read and I liked that. The demons are inside as well as without.