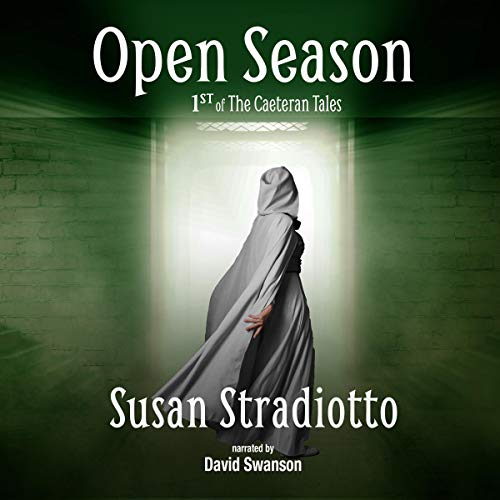 Running from her past, Elle developed a strong drive. Her mantra: executive by 30! She landed the job and celebrated her long-awaited success. That was...until she left the office late one night. When she stepped from the elevator, her life changed. Three cloaked figures waited....

Andreas Javine had Elle in his sights.

Terrináe’s Congress only allotted 36 slots for new entrants. When Javine missed his opportunity to nominate Elle, he resorted to alternate methods.

Yster yearned for her first entrant.

Thirty-six mentors had been selected, and Yster missed selection by one. For another Entrant Season, she would be relegated to serving the mentors who were gifted an entrant. That is...until her benefactor approached her with an unusual offer. She would have to pull double-duty, but...at long last...She had the opportunity!

The start to an epic fantasy series that will take listeners between Earth and Caetera.

a great first book in series

5 of 6 people found this review helpful

A nice intro into the series

There is a world in some sort of other dimension. This world uses the talents of Earth humans... but the way Terrinae folks get the humans there is... well... fishy. Elle has a great talent she isn't aware of, and she has no idea what's in store for her...

This is a neat Book 1 in a series. There isn't that much happening, but the authoress sets the stage for a very interesting plot, does a lot of world-building and uses the whole book to get you to care about Elle and Yster. Well, it worked on me! I now want to read the next book.

a lot of potential

This was a very complex story for only being 2.5 hours long. The issue I have with this book is that I think the author tried to cram too much into too short of a story. That being said, I think this series has a lot of promise. The narration is well done. I really think this could be an excellent series if the author takes the feedback from reviewers and either lengthens the books to allow for more development, and mental seperation between the various story arcs, or something similar.

Can’t wait to hear the rest of the books! I’ve enjoyed hearing them read to me by David Swanson

Confusing and a Bit Odd

This is the first book in the The Caeteran Tales. It is not a standalone book - it has a cliffhanger ending - which I don't enjoy as I find it to be gimmicky to force you to buy the next book in the series.

This story is really a novella. It is a bit confusing as it switches back and forth between Elle Jones, a woman who is hardcore into her career and striving to get promoted and the Caeteran people. Elle lands a coveted job as a vice president at a company, which isn't quite what it seems. The Caeterans have an interest in Elle.

This book is a bit hard to review as I liked it and found it interesting but at the same time, the story was a bit difficult to follow as it switched back and forth. I was not really interested in the Caeterans and it was not clear what they were up to as the story progressed - perhaps this will be expanded upon in the future books. Conversely, I felt that Elle was well developed.

I listened to this book -- the narrator, David Swanson, did a good job with the narration. He had a great tone and did well with the different voices.

I got this ARC via audiobook boom and this is my voluntary review. This book was so confusing. It was interesting. The ending was strange. The beginning was even stranger. I started out thinking I was getting a different type of story. Then I find that they are taking people because they can't procreate. All very strange. The narrator brought the story out.

Good, if a bit confusing at times.

It almost felt like two different stories going on. Overall it was enjoyable, though somewhat hard to follow the story line at times for all the jumping around in the story. Perhaps in book two, it will bring it together more. As a first book in a series it did well enough to introduce the characters and I'm already interested in what becomes of our main character.

The narrator was excellent. Very smooth on his delivery of the story. I enjoyed the book and would like the finish the rest of the series.