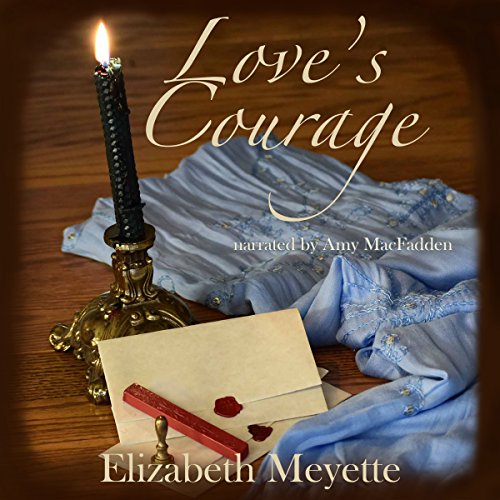 By: Elizabeth Meyette
Narrated by: Amy McFadden
Try for $0.00

She had to leave him to save her father.

He had to leave her to save his heart.

When Jenny Sutton arrives in British-occupied Manhattan to tend to her dying father, she finds herself entangled in the Patriot spy network - and on the verge of being hanged as a spy.

The marriage proposal of a British officer is her only hope of escaping the gallows, but it presents Jenny with a devil's bargain: if she accepts the proposal and lives, she'll be separated from Andrew - the man she loves but thought she’d left behind forever when she went to her father.

Desperate to join and protect his beloved Jenny, Andrew Wentworth agrees to deliver messages to the Patriot troops on his journey to New York. When he finally reaches Jenny, he's shattered to learn of her engagement…but channels his despair into determination and vows to fight to the death for the Patriot cause.

As the devastation and heartbreak of war rages around them, Jenny and Andrew must find the courage to fight for their new country's freedom - and their own eternal love.

What listeners say about Love's Courage

Jenny and Andrew were certainly made for each other. The thing that they would do to keep the other safe. The love they shared. The journey they travel. The deceptive people the traversed through to be together. The things they did for not just each other but for the country they were forming and protecting.

The depth of this love was there. The story showed the progress of reaching one another again. The test and trials they had to endure. I found the bad person was very bad and the qualities he possessed made him stand out and very very believable.

The audio quality was good. Amy McFadden has that type of voice the works well with historical audio. She allows you to feel enveloped within the story, the characters, and the romance as it unfolds or carries on.

I could not help my admiration of the courageousness of Jenny Sutton and Andrew Wentworth. They are caught up in the turmoil of the fight against the English. Where the colonists were taking sides, where one is unsure of who is friend or foe, where it could be death choosing to trust the wrong person–a wrong step and it would be the hangman’s noose.

Jenny knew that her father had been injured and her love for him had her lying to her uncle to get to Manhattan by ship. Her courage and strength gave her the fortitude to arrive. She sees her father before he passes, but is further caught up in his fight for his country’s freedom.

Andrew Wentworth, her love, catches her sneaking away to New York, and only sees the horrors she must experience. He begins his own journey, his goal is to get to Jenny, no matter how.

They are both snagged in a treacherous and nasty time, both become committed to something more than their love, but neither choose to let it go.

This is the first book I’ve read of this series and the first from this author. It’s also the first time I’ve listened to a narration from Amy McFadden. Both were an enriching experience. Meyette captures the angst and the evil which permeates times like these. McFadden takes the story to a whole different level with her emotional portrayal of the characters. When Andrew says Jenny’s name, with such love and reverence, it carves into my heart just a little more.

Lieutenant Nigel Ashby is a person of remarkable need for revenge, even when it hurts his own cause. Meyette and McFadden have me hating him! He has his eye on Jenny, attracted to her, but knows not all is what it seems with her household. He is also slightly imbalanced. He is very unpredictable in his actions, which spirals the arc of the story to its perfect, scary moment!

I received this audiobook as part of my participation in a blog tour with Audiobookworm Promotions. The tour is being sponsored by Elizabeth Meyette. The gifting of this audiobook did not affect my opinion of it.

A Historical Romance Rife with History

This is the kind of historical romance that I enjoy most: hearty in historical detail and atmospheric world building, with the romance added in as is fitting to the story. I certainly enjoy a romance set in the English Ton or on the American western trail, but sometimes they tend to feel somewhat cookie-cutter: replace the heroine and the specific situation she is running from when she meets hero, while the two don’t always get along well at first, they fall in love and everything is wonderful at the end. These are fun and light and quick reads. However, I’m a straight historical reader first, and I truly prefer more historical detail and depth of story that fits into some real historical event. That is exactly what Elizabeth Meyette brings to us in Love’s Courage.

This novel brings us squarely into the events of the American Revolution. While we are introduced from the outset to the heartbreak that pushes the romantic plot-line forward throughout the entirety of the novel, it is clear that this is just an element that the characters must face while they try to help their families and the American cause. It is certainly something important to each of the two romantic leads, but it isn’t their only important trait or direction in life. However, don’t fear that you are going to lose out on the romance story-line, it is present throughout and is well served by the details.

I have not read the first two books in this series, Love’s Destiny or Love’s Spirit, however, for the most part I felt sufficiently in control of the story having jumped in at book 3. The first chapter, where we meet Andrew and Jenny, had me questioning if we were introduced to their budding romance in either of the earlier novels because it felt like I should know a little something about them already, but based on reviewing the blurbs of the other two novels, if so, they must have been side characters. So besides that initial chapter, I felt comfortable with starting later in the series.

I very much enjoyed listening to Amy McFadden read this novel. Her personification of the characters was complete and made them entirely more relatable to me and my enjoyment of them within the story. Each character has their own voice and characteristics. Any good narrator can do that though; what makes it an even better production is the small things. When they are aboard a ship, the characters have to sometimes shout to be heard over the wind or the snapping of the sails. Sometimes they are very angry for a situation not going they way anticipated. McFadden brilliantly encapsulates these stylistic elements in her performance. Additionally, the pace of the performance is perfect to keep the plot moving forward, but give you enough time to digest what is happening (as the plot is FULL!).