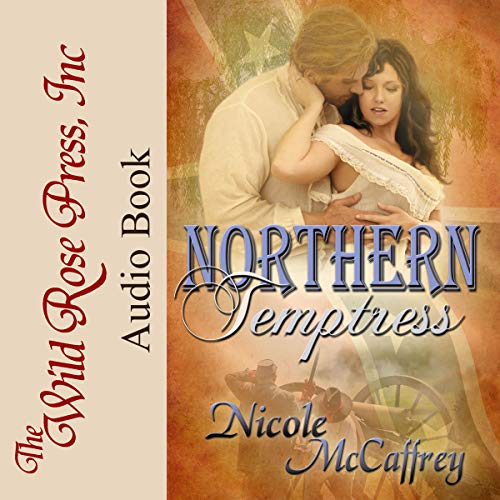 By: Nicole McCaffrey
Narrated by: Dawson McBride
Try for $0.00

When the Civil War arrives on her door step, Gettysburg doctor Alexandra Winters uses her knowledge of medicine to help the wounded. When an uncommonly handsome rebel officer finds her tending the wounded in his battlefield, he takes her for a spy until she confesses her darkest secret: Her brother fights for the South. He vows to find her brother and insists on escorting her home. But Alexa already has enough gossip attached to her name thanks to a scandalous divorce; she doesn't need to be seen keeping company with the enemy at a late hour.

Major Caleb McKenna, CSA, has grown weary of war and bloodshed. Dreams of glory and valor are long gone, as is the memory of his beloved fiancee back home in Georgia. Try as he might, he can't recall her face. Instead, it's the bewitching image of Alexa Winters that haunts his every thought. Her stubborn refusal to show weakness is put to the test when he brings news of her missing brother. His attempt to comfort the stoic beauty quickly engulfs them in a firestorm of passion, leaving Caleb torn between a promise made to the gentle belle awaiting his return - and an emerald-eyed, jet-haired Northern temptress.

When the major is gravely wounded, Alexa comes to his aide. Hiding a Confederate officer in a house filled with recuperating Union soldiers is risky...but fighting their growing desire is a battle they can't afford to lose.

What listeners say about Northern Temptress

A fantastic story of how the war effected all of the United States. The damage and the loss of family members. Brothers against brothers and neighbors againts neighbors. It lost of loved ones and how one woman fought to help doctor the wounded from the North and South.

Absolutely loved this book! The mixture of romance and adventure during the last days of the Civil War was a perfect combination. It was a hook from the beginning until the very last word. Where is the continuation?

Sure enjoyed this one!

This was the second Nicole McCaffrey book I listened to, and it was every bit as good as the first. I love the whiskey-voice that Dawson McBride has, and it just lent itself to this story so well. I felt the characters were well-rounded, I had the feeling that I KNEW them by the end of the story and was sad to have the tale end. There was just enough tension and "impending danger" to keep me worrying for the characters. Great job, Ms McCaffrey and Mr McBride!

Wow! Nicole McCaffrey does it again! This story brings together the horrifying bloodshed of the Civil War, the family struggles for both the North and the South, and the raw emotions brought on by all that surrounds those living during that time period.

Dr. Alexandra Winters looked beyond the color of a uniform and aided whoever needed her help. When a Confederate officer is badly wounded, she does what she can to heal him, even if it means hiding him from the Union soldiers.

This is a a good romance that takes place during the battle at Gettysburg during the Civil War..The unlikely attraction between a woman doctor and a rebel commander makes for an interesting story. The characters that surround the couple are well written. Dawson Mcbride is the narrator. I swear he could read from a phone book and make it sound good. As always he brings life to all well written characters in this book. I highly recommend this book.

I was immediately drawn into the story. It is full of action from the beginning to the end. And a great love story added. The author describes in detail painting the image in your mind while you are listening or reading. The story includes the hardships, the heartbreak, the anguish, and anger of both sides of the Civil War bringing it to personal level of the characters. All of this deepens the emotions of our couple.
The sex scenes in the latter part of the book could have been a little less explicit. Because of those, I rated the story less that I would have without. My mother would have loved the story but would not recommend to her because of the sex details as she does not appreciate them.

I liked the history based romance. A little predictable but a pleasant read. I do not care for the narrator’s raspy voice. I understand he is popular I simply don’t care for his voice.

I have never read a romance novel based during the Civil War and I'm glad that this one was my first. I received a free copy of the audiobook from the author and boy was the audio good! The narrator, Dawson McBride, is good and with him you can always tell the characters apart. That is a bonus because in some audiobooks you cant. This book tells the story of Alexa Winters who is a female doctor in the town of Gettysburg, PA. The book opens up right before the onset of the battle with Dr. Winters holding a gun to a confederate soldier while he was trying to barge into their house. When Major Caleb McKenna finds out about this he puts a stop to it. Throughout this their paths were meant to cross. When Caleb is gravely wounded Alexa heals him and hides him in their cellar. However, feelings towards the rebels isn't great and he can't stay in the cellar forever.

This novel was really good and it showed how feelings can be created in short periods of times. My only complaint about is at the end of the novel. I would have expected Alexa to at least berate Caleb a bit when he shows back up. It seemed too easy really but that could just be me. It is a definite good read though!

War rages but love finds a way through.

She's a doctor fighting to survive and treat patients . He's a southern officer who needs her both physically & professionally. He's promised to another. She's been married before. Can a Civil War stop their love and passion for each other or will it take true love away from them? A Civil War story of what happens when a strong willed woman meets a southern gentleman & officer. The sparks fly but she resists because she doesn't want to break up his engagement and have the gossips talking about her more than they already do. When he's injured and brought to her. It's up to the doctor to save his life. Their passion for each other grows and so does their love.
This book was well written and I look forward to the rest of the series. Mccaffery writes an emotional & heartfelt book.

Gettysburg: When the Confederate army enters Gettysburg, it was not a happy time for those living there. Alexandra Winters is a doctor and she helps those who need her medical care regardless if they are from the Confederate or Union army. She already is not a favorite of her hometown but she does not care, she is a doctor and will do what she was trained to do. Major Caleb McKenna--a true southern gentleman, already tired of the war is station at Gettysburg and happens to meet Alexandra and her family when a couple of Confederate soldiers tries to move into her home. Stopping them, Caleb apologizes to her and promise it will not happen again. Instantly there is an attraction between the two but neither acknowledges it. Several days later, during a battle between both armies, Caleb is hurt and Alexandra tends to his wounds secretly as the Union now is in control of Gettysburg. This is when the attraction to each other grows, but can they truly be together? A Southerner and a Yankee? This is a must listen/read novel, it is beautifully written and the narrator did a great job in the telling.

A doctor on the underground railroad accepting a Confederate who hasn't turned abolitionist? Bit odd.