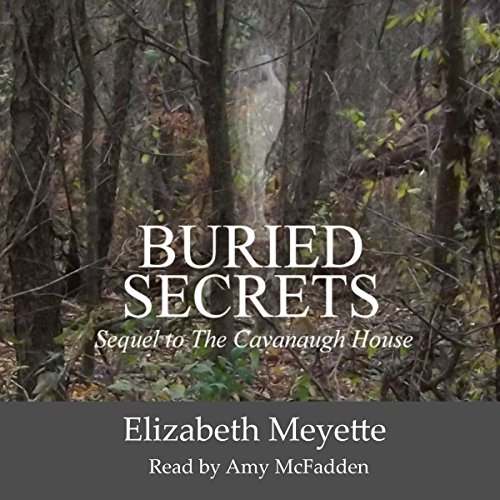 By: Elizabeth Meyette
Narrated by: Amy McFadden
Try for $0.00

When Jesse Graham almost runs over a "body" in the road one night, she is plunged into a labyrinth of secrets, lies, and murder. All Jesse wants is a simple life teaching at St. Bart's and a chance at love with Joe Riley. She realizes that plan has been thwarted when puzzling occurrences at St. Bartholomew Academy for Girls get increasingly dangerous. The danger doesn't just spring from the ghost who haunts the grounds of St. Bart's, but from a sinister presence that is not ghostly at all. As she digs into the mystery, threats on her life and the life of her student escalate.

Which danger threatens her life the most? The ghost haunting her student or the secrets buried in the school?

What listeners say about Buried Secrets

No. The narrator has such an annoying "valley girl" delivery, I had a difficult time listening to it. She sounds about 16 and has an affected way of speaking. I got this second book in the series because I didn't remember this until I started listening. If I'd remembered her narration, I wouldn't have bought it.

The plot was pretty good.

Who would you have cast as narrator instead of Amy McFadden?

Someone more mature. I don't know who. The main character is supposed to be 28, not 16.

This is the first time I've left a negative review because of a narrator. I know she's won a lot of awards, but I just don't like her affected narration style.

This is book two in a series, but you can read it separately with no problem. It takes place in 1968. Jesse, in the previous book, inherited a house, and then discovers that she is an heir to an immense fortune and manor home. But she is an English teacher at heart and is teaching in a Catholic girl's high school.

She discovers a "body" wrapped in a blanket lying in the road. This begins her first as a teacher year at the school. She discovers some mysterious goings on and thinks there may be a ghost, as well as some potentially dangerous mischief. She has a relationship with Joe, but having been burned by her former fiancé, she isn't ready to commit. Then she meets Scott, the equestrian coach.

Great characters, several mysteries, interpersonal goings on. All an all, a great story with some very interesting twists. It's well written and almost any reader can enjoy it.

I listened to the audio version and the narrator was excellent.

I haven't read the first book to this series and I did not feel lost. Matter of fact it touched just enough to let me know what was going on and left me with a desire to go read the first book. Also loved the good job Amy did with the reading.

Ghost of the Past

A girls school is haunted by a First Nations mother looking for the burial site of her child, killed by settlers. Combine that with rich, privileged school girls with mean streaks a mile wide and new teacher Jesse has her hands full. If you like ghost stories that actually have a story and not just apparitions screaming boo, this is your story. I was gifted this from the author.

Buried Secrets by Elizabeth Meyette pulled me in from the very beginning. I so enjoy books with a paranormal twist. This book is part of a series, and a standalone listen. The character of Jesse really appealed to me. The author created some very intriguing characters and had vivid imagery. I could picture so many details listening to this book. Amy McFadden is fabulous in her performance. She gives the right emotions to the characters and scenes. The post production of the book is also well done without added sounds that should not be there or doublets. Thank you Audiobookworm Promotions for this review copy, I loved it! I will definitely listen to more books by this author and narrator. Without giving away spoilers, the ending of this book was well done!

This is my fist book by Elizabeth Meyette. Buried Secrets is the 2nd book in the Cavanaugh House Series and although I did not read/listen to the 1st book The Cavanaugh House iwas able to follow along. This is a stand alone. It does reference some people, places, and things in book 1 it is a whole new story. I enjoyed this book a lot.

Elizabeth Meyette to me has done a great job of bringing a haunting, some romance, a mystery, and a huge does of suspense to this book, and series. At times I was wanting to fast forward just to see what the outcome was of certain parts of the book. The book is not filled with an overdose of random details or descriptions that mean nothing to the story, I personally really like that. I was on the edge of my seat several times in this book. There is a little violence, some mild cursing (no F Bombs), and no sex in the book.

Amy McFadden narrates the audiobook and I really enjoyed listening to her. She has lots of feeling and emotion in her rendition. She really kept my interest.

In the book Jesse Graham is the new English teach at St. Bartholomew Academy for Girls. This is a Catholic boarding school that is owned by Jesse's estranged family. It is also haunted by a Weeping Indian woman who is looking for her child. But that is not all there is another threat of danger that is putting the lives of the girls, the Nuns, and Jesse as well in danger.Also the romance between Jesse and Joe from book one continues.

I received this audiobook as part of my participation in a blog tour with Audiobookworm Promotions. The gifting of this audiobook did not affect my opinion of it.

You did it again.

Another beautiful story filled with mysteries love and ghosts. I loved this heartwarming story. Beautifully done.

Too many love interests, not enough ghosts

Even worse than the first in the series. I get it, I get it, authors don't want the female lead to end up alone. Personally, I find it really boring when I'm trying to read a nice ghost story and the characters are constantly distracted by romance. Surely, one sidekick is more than enough! just get this woman one boyfriend already if you REALLY can't help yourself, and let her carry on finding ghosts and mysteries. And these male suitors are all so incredibly gorgeous and charming, with such lovely personalities, no wonder she spends the ENTIRE 2 books not being able to settle for one of them. I mean, with this track record, she must be curious to see who comes up in the third book in the series, surely it can be no less than some sort of God. Luckily, she has been very, very hurt by someone before, which she repeats ad nauseum to these bewitched, perfect male specimens, thus having an excuse for never making her mind up, while still keeping them around. Not that they have much choice anyway, since every other woman in town is, very conveniently, a nun.
Really not sure I'll be able to finish this one...

Could Not Stop Listening!

Would you listen to Buried Secrets again? Why?

I would love to listen to this book again. Not only this one, but the book prior to this one in the Cavanugh House series

I was literally holding my breath as she went down into the tunnel, praying that it would not collapse on her and when it did, could she be found in time?

Amy makes you feel like you are there....she did a FANTASTIC job narrating this.

I enjoyed the book!

If you could sum up Buried Secrets in three words, what would they be?

Would you recommend Buried Secrets to your friends? Why or why not?

Yes, because the book is enjoyable to listen to.

I was very pleased that Amy McFadden narrated this book as well. She is very pleasant to listen to and she shifts between the characters effortless. Part of the joy of this book is listening to her tell the story.

No, but I enjoyed listening to the book!

I enjoyed the book and I would definitely read/listen to more books about Jesse Graham!