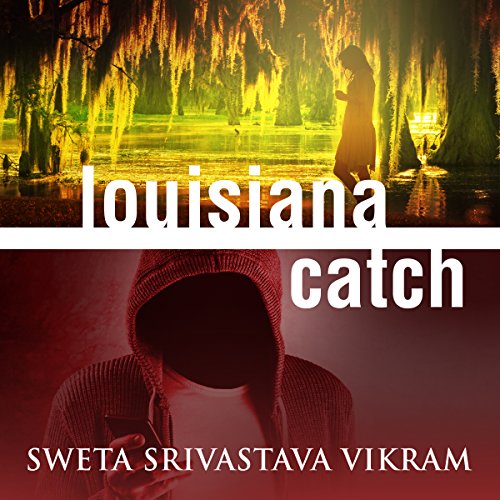 By: Sweta Srivastava Vikram
Narrated by: Minita Gandhi
Free with a 30-day trial

A grieving daughter and abuse survivor must summon the courage to run a feminist conference, trust a man she meets over the Internet, and escape a catfishing stalker to find her power.

Ahana, a wealthy 33-year-old New Delhi woman, flees the pain of her mother's death, and her dark past, by accepting a huge project in New Orleans, where she'll coordinate an annual conference to raise awareness of violence against women. Her half-Indian, half-Irish colleague and public-relations guru, Rohan Brady, who helps Ahana develop her online presence, offends her prim sensibilities with his raunchy humor. She is convinced he's a womanizer.

Meanwhile, she seeks relief from her pain in an online support group, where she makes a good friend: the mercurial Jay Dubois, who is also grieving the loss of his mother.

Louisiana Catch is an emotionally immersive novel about identity, shame, and who we project ourselves to be in the world. It's an audiobook about Ahana's unreliable instincts and her ongoing battle to determine whom to place her trust in as she, Rohan, and Jay shed layers of their identities.

"Louisiana Catch is a triumph. In Ahana, Sweta Vikram has created an unforgettable character, strong, wise, and deeply human, who'll inspire a new generation struggling to come to terms with their identity in a world of blurring identities." (Karan Bajaj, New York Times best-selling author, The Yoga of Max's Discontent)

"In Louisiana Catch, Sweta Vikram brings life to the complex human rights issue of violence against women. Through one woman's journey to make sense of her past and ultimately heal, Vikram shows us that yoga can reconnect us to ourselves, and that by empowering others, we transform our own lives." (Zoe LePage, Founder, Exhale to Inhale)

What listeners say about Louisiana Catch

Fantastically Haunting in its Realism!

I’m rating Louisiana Catch 5 out of 5 stars but honestly, I wish I could rate it so much higher. This is perhaps one of the best books I’ve read in the past year and half. Dealing with real issues with both a captivating setting and wonderful characters, Louisiana Catch pulls the readers into Ahana’s world and holds them there. After finally divorcing from her abusive husband, Dev, Ahana is working to get her life back together. She finds comfort in the little things like yoga and running but she still doesn’t feel free. Focusing her efforts into a conference for women’s rights, Ahana tries to move on with her new life. Her mother is the only one who comforts her, supporting her through her trials until unexpectedly, she dies leaving Ahana to face her grief and troubled past alone. In an effort to reach out, Ahana joins an online support group and it’s there that she meets Jay who at first seems charming and understanding but who quickly shows his true colors through a series of strange messages and mood swings. With Ahana navigating through the pain of her past, the trials of a new relationship, and the dangers of the internet, Louisiana Catch paints a shockingly realistic image of what life is really like for today’s modern woman. Though this is not my typical read, I definitely recommend this to everyone! "This book was given to me for free at my request and I provided this voluntary review."

Great story that showed strength comes in many forms. So drawn in, wanted to reach out to Ahana with advice.

I got this story via audiobook boom and this is my voluntary review. Yoga, strength, pain, violence, self-doubt, stepping out of your own head, learning to trust, and so many other emotions all combine to make this an outstanding story. This is one that you should listen to without distractions. You will miss something if you don't.