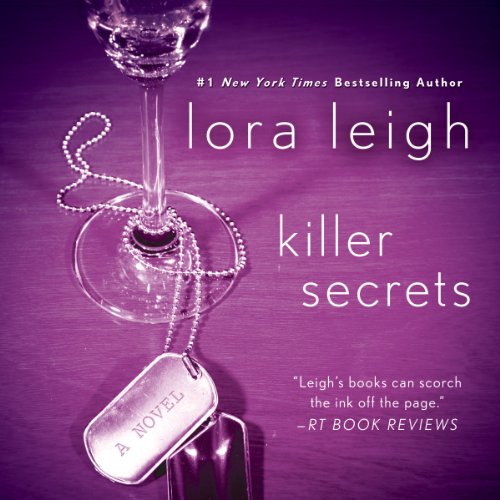 By: Lora Leigh
Narrated by: Mackenzie Heart
Try for $0.00

The fight of his life...

As the illegitimate son of Diego Fuentes, Ian Richards faces danger at every turn. Neither his father nor his fellow Navy SEALs knows which side he’s fighting for - or against. Which is exactly how the game must be played…until Agent Porter enters the picture.

...stirs her desire for living.

Kira Porter, undercover agent for the Department of Homeland Security, shadows Ian on his journey. She thinks she can see the real man beneath Ian’s bad-boy exterior…but the ever-elusive Ian keeps her guessing at every turn. Is his goal to protect the Fuentes cartel from French terrorists? Or to do his father in for good? The only thing Kira does know is that her attraction to Ian is a time bomb waiting to explode. With time running out on the Fuentes mission, she and Ian are drawn ever close to the edge of desire - and even closer into the line of fire….

What listeners say about Killer Secrets

As a Lora Leigh fan, I was disappointed with the plot and character development in Killer Secrets. The characters just appeared without much explanation, which was confusing and annoying. I kept drifting off and loosing track of the plot, so I quit listening.

Good story line but a lot of sex

Yes the plot and story line was good, It just had a lot of sexual scenes.

Unlike her other books in this series, I struggle to finish this one. Her major characters lacked appeal. What plot there was was boring. Even her sex scenes were boring.

The narrator only added to the lack of appeal. Her hero's voice always sounded flat and sinister, even in love scenes, which made it difficult to like and connect with the hero.

In short, this book failed in characterization, plot and performance. Since I liked her other books in this series, one by other narrators, I as surprised and disappointed.

Loved the characters, the storyline was good, the sex was super hot & exciting. The only drawback was the repetitive remuneration Ian had with his sperm donor father. I got tired of having his crimes repeated a couple of dozen times at least.

I’m in the minority here. A lot of my friends liked this. One friend said she loved this “in print” but “kept drifting off in audio.” So maybe that’s part of my problem.

I read 30% and stopped. It’s characters thinking, talking about things, and being intense. Lots of threats, warnings, and orders to others. There is almost no action. There is no doing of anything. Ian deserted the Navy SEALS and is now developing a drug business in Aruba with his father a cartel guy. Ian wants to find the terrorist Sorrell. But so far, there is no action.

When Ian sees Kira he says “I want you to leave Aruba.” She doesn’t. The next time he sees her he says the same thing. Another time he says “You’re not supposed to be here.” That was their main conversation.

THE GOOD PARTS:
Hot steamy sex scenes. It might be worth reading just for that. They are explicit and graphic plus pain. Ian pulls her hair, spanks her, ties her hands. There is self pleasuring and back door action. The focus is “male domination.”

AUDIOBOOK NARRATOR:
Mackenzie Heart had very good interpretation and sound, but she needs a different microphone or sound equipment. Her breaths were too loud. They were distracting.