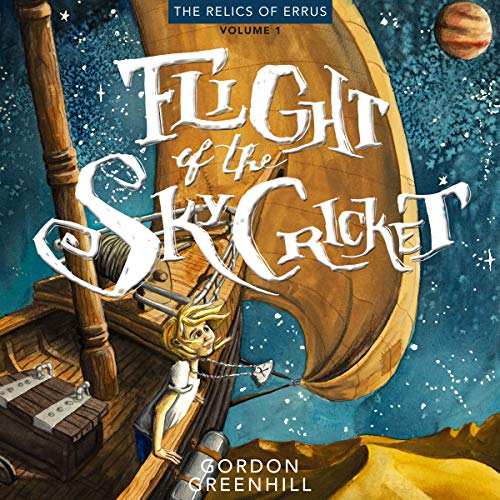 Flight of the SkyCricket

Flight of the SkyCricket

In our world, science and mythology are mortal enemies. But what if a world existed where they were the same thing?

In this first volume of The Relics of Errus, Flight of the SkyCricket, three sisters-Eli, Anna, and Rose Hoover-stumble through a window in the wine cellar of an old Victorian house and find themselves in Errus, a world where natural disasters give birth to mythological creatures-some harmless, some horrific. Caught up in a quest involving impassable deserts, dangerous jungles, dark mountainous caverns, and a menagerie of dwarfs, fairies, knights, and quirky scientists, they search for the mythical Well of the sea goddess Therra, which seems to be their only way home.

Trapped in a world that births fairies from windstorms and dwarfs from earthquakes, everything rests on finding the lost well...if it even exists. Both the pious and skeptic make their case along the way, but belief may not always be something you choose-sometimes it is something that happens to you.

I really enjoyed this audiobook well narrated fantasy. The book pays omage the works of bothTolkien and C.S. Lewis and will appeal to both youth and adults. The story is engaging, the world is well imagined, and the prose is delightful. This would be an excellent audiobook choice for a family road trip with older children and teens.

A perfect intersection between Fantasy and Science

I'll be the first to admit that I don't read a lot of fantasy. My wife does. Occasionally I read fantasy books to stay conversational with her. My heart (and booklist) really lies in theology, philosophy, and mythology. Luckily for me, Flight of the Skycricket is a perfect conversation partner between the three.

Mr. Greenhill has managed to create a book that also defies the typical book categories. Is this book for children, pre-teens, teenagers, adults, all four? I believe the book is simple enough for some preteens and complex enough for adults. However I believe one of the book's strength lies in it's ability to capture the heart of all people who are willing to suspend disbelief and who have the desire to live in a world where imagination might get you closer to non-fiction.

If you want simple pulp science fiction or fantasy, don't look here. The characters are engaging. The world is well created. The plot is riveting. The audiobook and Mr. Greenhill is in a league with only a small handful of audiobook readers.

I cannot wait for the second volume!

Flight of the SkyCricket tells the adventure of three sisters, Eli, Anna, and Rose who are facing a difficult time in their lives.  Moving into a new old house leads to them discovering a passage to a new world a new adventure in the world of Errus.

Here they will meet and engage with a variety of people - some old and wise sages, an eccentric Professor Lambient inventor/tinker, a brave knight, a feisty fairy, a loyal dog, and many other friends and foes.  Add to this some very unfamiliar lands, cultures, mythology, philosophy, politics, and some otherworldly technologies that are at once antiquated but also futuristic in some really interesting ways. The SkyCricket itself is a great example of this - a steampunk-ish skyship that is as Rube Goldberg as it is functional.

To accomplish the sisters' goal of returning home they will need to make allies and work with many others. These others are on their own quests and have their own motivations - and not everyone they face wants them to succeed. Through their adventures together. Each sister surfaces their unique gifts and strengths which are all required to survive and succeed with the life-or-death challenges they now face together.

Skycricket also brings us into two divided Errusian cultures of Azhwana and Garlandium who are separated by an ever-widening physical barrier of a desert, but also by many false narratives about one another which are also growing because of their separation.  Some very timely themes that are not covered or resolved with easy answers and solutions, but offer a number of thoughtful questions of how people with their differences can come together. Will the long war between them end or only reignite because of what they have found and done?

A very fun and fast read/listen as a nice diversion, but also one that makes you think more than I thought it would. I started off thinking it was a young-adult fantasy book, and that still works, but there are facets that work for other genres and ages too.