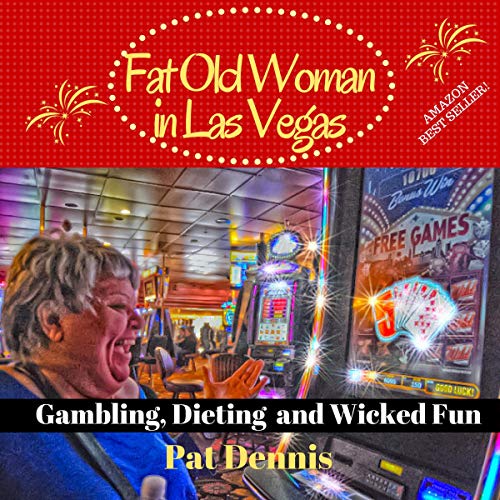 By: Pat Dennis
Narrated by: Beth Kesler
Free with a 30-day trial

After fighting off physical indignities that would keep a lesser woman in her recliner, Pat Dennis sets out on a solo journey to experience the loves of her life - Las Vegas, gambling, and all-you-can eat buffets. Pat travels the 2000 miles alone from Minnesota to Sin City by car, train, and greyhound bus. Pat's ability to take an honest and often hilarious look at aging, declining health, out-of-control gambling, and a myriad of nueroses, make this inspiring, funny, and enjoyable.

Pat Dennis' short stories and humor appear in magazines such as Woman's World and Minnesota Public Radio's, Minnesota Monthly. Her work has been published in numerous anthologies, including Anne Frasier's Deadly Treats; Who Died in Here?; The Silence of the Loons; Resort to Murder; Fifteen Tales of Murder, Mayhem and Malice From the Land of Minnesota Nice; Once Upon a Crime Anthology; Writes of Spring, and Mood Change.

She is the author of the Betty Chance mystery series which includes Murder by Chance, Killed by Chance, Dead by Chance, and Vegas by Chance. Her latest venture is the hilarious Kill Me! My Husband's Retired! - a coloring book for the reluctant adult. Her other novels include Stand-Up and Die, and a Middle School novel The Witches of Dorkdom, written under her pen name, Nora England.

Pat performed as a stand-up comedian with more than 1000 performances at comedy clubs, Fortune 500 companies, women's expos, and special events. She has appeared on the same venue as Lewis Black, Phyllis Diller, and Nick Swardson.

What listeners say about Fat Old Woman in Las Vegas

This is so fun to listen to. I love vegas and slots. :)
Thanks for this audiobook