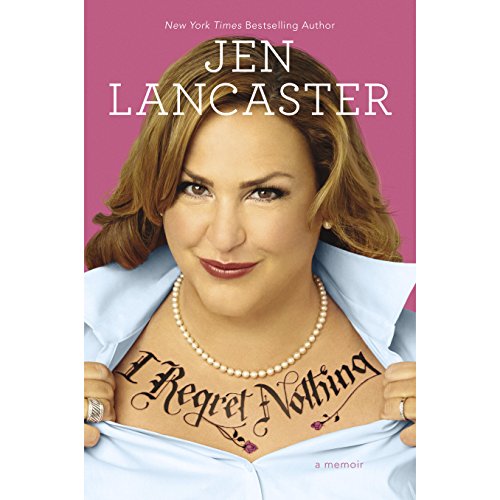 New York Times best-selling author Jen Lancaster has lived a life based on re-invention and self-improvement. From Bitter Is the New Black to The Tao of Martha, she’s managed to document her (and her generation’s) attempts to shape up, grow up, and have it all - sometimes with disastrous results...

Sure Jen has made mistakes. She spent all her money from a high-paying job on shoes, clothes, and spa treatments. She then carried a Prada bag to the unemployment office. She wrote a whole memoir about dieting...but didn’t lose weight. She embarked on a quest for cultural enlightenment that only cemented her love for John Hughes movies and Kraft American Singles. She tried to embrace everything Martha Stewart, while living with a menagerie of rescue cats and dogs. (Glitter...everywhere).

Mistakes are one thing; regrets are another.

After a girls’ weekend in Savannah makes her realize that she is - yikes! - middle-aged (binge watching is so the new binge drinking), Jen decides to make a bucket list and seize the day, even if that means having her tattoo removed at one hundred times the cost of putting it on.

From attempting a juice cleanse to studying Italian, from learning to ride a bike to starting a new business, and from sampling pasta in Rome to training for a 5K, Jen is turning a mid-life crisis into a mid-life opportunity, sharing her sometimes bumpy - but always hilarious - attempts to better her life...again.

"Hilarious.... Lancaster tackles everything from getting a tattoo removed to running a 5K.... No complaints here." (InStyle)

What listeners say about I Regret Nothing

Would you listen to I Regret Nothing again? Why?

It was super funny and I could relate!

Had me laughing from the begining

Would you listen to another book narrated by Jen Lancaster?

I laughed out loud the whole time!

I had to get used to her narration style. Otherwise was a great listen!!

What made the experience of listening to I Regret Nothing the most enjoyable?

I love her humor. I just love how after all the books we feel so connected with her, her husband, and all her animals.

She really showed a different side of herself while discussing her facebook critics. Jen is someone I've always thought of as a bad ass. I was heartbroken for her when some lady was rude to her.

Have you listened to any of Jen Lancaster’s other performances before? How does this one compare?

Like I said, it shows the down side of fame. I have listened to every one of Jen's books. This was really the first one she showed some of the down sides of being a writer.

I loved the whole book. It's hard to read any of her books and not enjoy them.

With fame, always comes assholes Jen. We love you, and will always read anything you write. You deserve everything you have, and worked like a demon to get it. Never let horrible people take that away from you even for a second! I like you, lost everything in the 2008 bust, and have clawed up from nothing to better than I was (at least mentally) to where I am now. Head up, you're awesome, and you know it. :)

Jen's sarcasm and wit is back

I Regret Nothing is a return to the Jen Lancaster of the Bitter days in some respects...her humor and sarcasm is back as well as a few (well deserved) snarky rants directed at the self proclaimed righteous police of social media. She's stepping forward with a bit of the introspection from Such a Pretty Fat and growing up and moving outward. One of the things I love about Jen's books is her ability to touch base with our generation of women from a specific set of reference points most of us are going through - millennials and our Mothers don't relate so well because Jen's experiences aren't theirs. And that's ok...they have their own voices to reflect their coming of age trajectories, we have Jen and Fletcher.

Her recap of the basement flood had me laughing out loud in my car, eliciting a stare from the barista at the Starbucks drive through window. And I admit, I looked up three wheel bikes online which in turn set off a string of laughter punctuated by curse laden threats from my own husband. I'll stick to walking the dogs through our neighborhood with my audio books thanks and planning our next overseas trip that does not involve backpacking...because it's ok to say "that doesn't work for me". Thanks Jen

Good, not the best

I love Jen's other memoirs. I would put this one way above Jeneration X. I have really loved all of her other memoirs, so I guess I'm only disappointed because it didn't live up to those. I still enjoyed it, and finished it in two days. She says "sidebar" way too much in this book. At first, I thought it was just going to be in the opening chapter, but it was constant sidebaring through the entire book.

The Smug Is Strong With This One

I listened to this twice, and maybe that was my mistake. I enjoyed it the first time, but the second time there were things about it that weren't satisfying. Jen's matured a lot, and her writing has gotten a bit stuffy and formal. Or maybe that's just the over-enunciating/stuffy way she reads it. She learns lots of lessons about herself and is so damn pleased about it, that after awhile I found myself rolling my eyes and getting twitchy. She has FINALLY stumbled upon the key to her losing weight, but decides that sharing the details of it aren't appropriate for a "funny memoir" - NO! I want to know! There's just a whole lot of smug judging that made me feel less and less that Jen's someone I'd want to hang out with (the way I USED to feel$. Couple that with snooze-worthy stories, stilted dialogue, and constant apologizing any time she has an opinion that might be the slightest bit controversial and it's a wash. The only thing I regret is going back for the second reading!

If you are her fan, possibly good.

Came across as pretty ego centric. It was all about the author. This was probably the point of the book. As a non-fan, I skipped big chunks of it.

Ypu aren't the only one!!

I love Jen Lancaster!!! Her books are funny and help you realize that you are not alone!! She is as real as it gets and funny to boot! I have read all of her books and this may be my favorite!!!

I devoured several of her books one after the other a few years ago and found her delightfully funny and sarcastic. This book was definitely not a disappointment. She is totally relatable. Even as an elder millennial I cackle laugh at her way of observing things. I like her stream of consciousness way of writing. When I read your book without audio it’s like I could hear your voice and when I heard you read this I was like yep that’s exactly the way I remember it. I also love that from “Bitter” to “Regret” your personal growth is amazing. From an overweight 34 year old Elder millennial, you speak to my hear and inspire me. Now I need to catch up and read the other books I missed.

Jen Lancaster is one of my favorite authors. I love her stories about her crazy pets, especially her dogs, and hilarious & heartwarming stories about what it’s like in her loving fur baby filled family. I love her stories about her conversations and arguments with her husband Fletch who is also quite funny. (their online IG Hallmark Christmas movie reviews last year were hilarious!) I also enjoy hearing her conversations with friends and strangers alike, and how her mind works when sizing people up. She used to be openly judgmental which was honest and funny but in today’s world that kind of humor is being cancelled and it’s terrible in my opinion. Must make it really challenging not just for comedians but for authors who say it like it is. I loved her first several memoirs the most, especially “Such a Pretty Fat” & “Bitter is the New Black” as they are so relatable.

I think this is the 5th or 6th memoir I’ve by Jen and sadly “I Regret Nothing” is my least favorite along with the everything Martha book. I still found it enjoyable especially as now her books are available on Audible with her reading her own work which I love. I am really hoping this is the only 3 star review I’ll ever give to one of her books. I can’t wait to read “Stories I’d Tell in Bars”.

Something about this book just didn’t have me racing to finish it. I think “that something” is the lack of what I listed above that I love about Jen’s memoirs. I especially found this most true once I got into the Italy vacation chapters. I’m not much of a foodie so the detailed descriptions of foods in Italy were boring to me. However I loved her interactions with the Frat boy in the sunglasses shop & the needy idiot in her Italian class.
I don’t know much about furniture restoration and though I’m glad she found a hobby she loves, I didn’t much care to hear about it. I never got a tattoo but have heard many a story of tattoo regret so I understand but can’t much relate to that mindset, but learned how expensive “No REGERTS” is to erase! (Misspelling is deliberate here). I never understood the Martha obsession and don’t call anyone my queen so I was kinda glad Jen got to see her true colors in this book after the last one praised her relentlessly. Not because it hurt her but simply in hopes to not hear anymore mention of “her Queen” in future books. Road trips are relatable and her disastrous journey with the gals was probably my favorite part, but nothing made me really laugh.

Bucket lists and crossing things off lists are both relatable things and therefore the premise of this book and it’s title were very appealing, and of course written & read by Jen Lancaster. I think I expected some more scandalous material with the title & cover art. Silly of me judging a book by its cover. I’m just glad she wrapped things up with coming home to the dogs.

Jen and Fletch in Italy...best days ever

Love your narration Jen. Chapters 20 & 21 about being fat, exercising, juicing, and running were funny and true. Another great book from you. Keep ‘em coming.