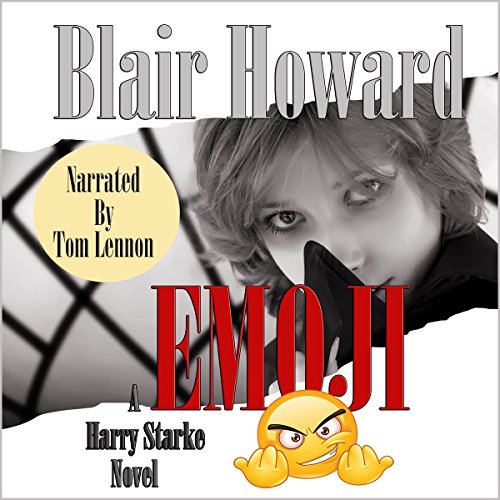 By: Blair Howard
Narrated by: Tom Lennon
Try for $0.00

Maggie Hart, a student at UTC, was abducted on Labor Day. Her body was found five days later on the RiverPark. She'd been strangled. She wasn't the first, nor would she be the last. Harry Starke, recovering from a near-death experience, is dragged reluctantly into an investigation that quickly turns into a cat and mouse game between Harry and a very clever killer, Harry being the mouse. Emoji is an action-packed, lightning-paced story, with an explosive finale you'll not see coming.

What listeners say about EMOJI

I have read all the previous Harry Starke books. This is as good as the best of them. Can't think of any in the series that disappointed. Keep them coming Mr. Howard.

Harry. This is a guy you wish you knew for real.

Have you listened to any of Tom Lennon’s other performances before? How does this one compare?

I have only listened to him in the Harry Starke Characters. Be hard to imagine him as anyone else, or visa versa for that matter. He is Harry. Great casting.

Every Harry Starke book has a unique plot. No two even remotely alike, yet all take advantage of what the listener knows from previous episodes. You can enjoy no matter what order you read/listen to them in, but I certainly recommend starting with #1 and just working your way through.

EMOJI by Blair Howard two months since he's been in the office, he doesn't want to go back. Enough is enough, but others not listening, he's 47, they are expecting their first child, life was a gift, after his close call with death.
Chattanooga students being killed, the nightmares have come again for him. He knew he would be haunted till he could put her to rest. Another fast pace story, that draws you in. Feeling the emotions of Harry, as he fights with himself doing what he needs to do.
Given audio for my voluntary review

Emoji is an entertaining serial killer mystery featuring private investigator Harry Starke. It’s a great mystery though Harry makes some pretty dumb moves that almost get him killed. You’d think with all his experience, he’d know better. Still, I really liked the book!

The narrator is the same one who does the rest of the series. He does a nice job.

Narration was spot on and the story holds your interest. The story is about missing girl that is found murdered. There appears to be little to go on to solve the murder.

Harry goes up against a sicko who's a little to smart for his own good, but really builds up a body count of young innocents. Try as he might, Harry is stymied even as he's sure of the culprit. Not to worry, maybe this time he'll catch the bad guy without being shot and maimed?!? Read and enjoy.

I didn't read this book in the proper order but it didn't make any difference. Harry Starke was tested on his abilities and without wanting give anything away, I can say he won this case, Good story, well narrated (although the British accent is not quite there (speaking as a Brit that is). Thoroughly enjoyed the book