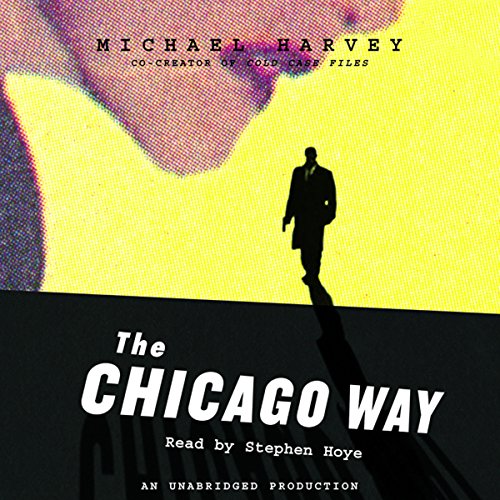 By: Michael Harvey
Narrated by: Stephen Hoye
Try for $0.00

From the co-creator and executive producer of the television show Cold Case Files, a fast-paced, stylish murder mystery featuring a tough-talking Irish cop turned private investigator who does for the city of Chicago what Elmore Leonard did for Detroit and Raymond Chandler did for Los Angeles.

Chicago private investigator Michael Kelly is hired by his former partner, John Gibbons, to help solve an eight-year-old rape and battery case. When Gibbons turns up dead, Kelly enlists a team of his savviest colleagues to connect the dots between the recent murder and the cold case it revived: a television reporter whose relationship with Kelly is not strictly professional; his best friend from childhood, now a forensic DNA expert; a detective with a special interest in rape cases; and a friend from the DA’s office. To close the case, Kelly will have to face the mob, a serial killer, his own double-crossing friends, and the mean streets of the city he loves.

Ferociously plotted and crackling with wit, The Chicago Way is first-rate suspense and a marvelous debut.

"Bringing Chicago to life so skillfully that the reader can almost hear the El train in the distance, Harvey is poised to take the crime-writing world by storm." (Publishers Weekly)

“A magnificent debut that should be read by all.” (John Grisham)

“Harvey’s debut delivers a fast-paced thrill ride through Chicago’s seedy underbelly...[He] masterfully combines the sardonic wit of Chandler with the gritty violence of Lehane’s Kenzie and Gennaro series. Bringing Chicago to life so skillfully that the reader can almost hear the El train in the distance, Harvey is poised to take the crime-writing world by storm.” (Publishers Weekly, starred review)

What listeners say about The Chicago Way

A wicked good storm of cliches

No, it isn't high literature, but it sure is fun. While the author's knowledge of Chicago sometimes comes off a bit tin, it's a great listen. It's perfectly within that two-fisted, hard-boiled, modern pulp genre, and a wonderful exemplar of it. The narration is top notch. The crime's solution and ending is almost hilariously improbable, but along the way you've just had too much fun to care.

Amazing book. I was at the edge of my seat biting my nails. Very interesting.

Couldn't get past the narrator

I tried but couldn't get past the narrator, who sounded like Thurston Howell, not as a guy from Chicago

Hard to look past the cliches

The narrator was great. Plot was interesting, but writing was poor. Author uses every boring cliche possible about Chicago, women, rape and police officers. It was really hard to make myself stick with it to the end.

Is this meant to be a parody?

The narrator reads it in an such a simpy, "ironic" tone, that I can't believe it's supposed to be taken seriously as a crime/mystery novel. Maybe he's using that tone because of all the generic cliches. I'm in the second hour of listening right now. As soon as I finish writing this, I'll be on to trying something else. What a disappointment!

First, let me say that I love Stephen Hoye as a narrator. Anything he reads (especially when he reads in first person, and with a hint of world weary sarcasm) is pure enjoyment. The book's subject matter, however, was a little off putting. I really don't like the details of a serial killing, or anything gory. So I might rethink this author's next novel.

Too much Robert B. Parker

Only a little of which is attributable to the reading. I said.

The literary hook is Greek tragedy. Which works remarkably well.

The guy did a good job of plotting, and by the way his hero has a conscience.

So I'm not dis-recommending it. Just warning you that you will be frequently annoyed if you listen to this too soon after reading or, especially, listening to a Spenser novel.

I hope there will be many more Michael Kelley adventures with Stephen Hoye as our man.