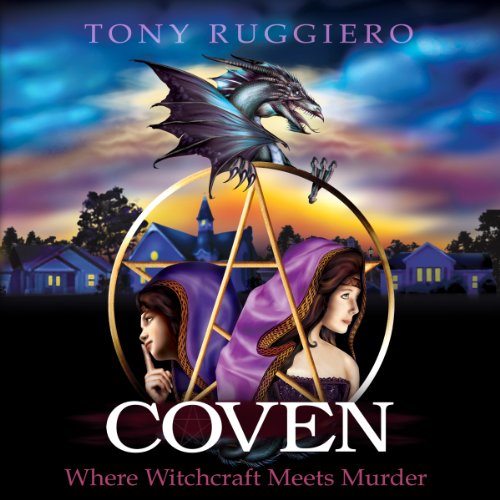 Little towns and secrets: a guilty pleasure for some and a harsh reality for others. Witches have secretly been in control of the town council for years and the town has prospered...until now. As they search for the truth behind the mysterious death of one of their shop owners, they uncover disturbing secrets about an ostracized witch and their own coven leader, making it unclear which one may have been using black magick to murder.

Enjoyed the book, loved the narration!

I liked the tone of her voice and enjoyed listening to her tell the story. It was easy to visualize the different characters.

I could have listened to the entire story if I had enough time or on a major road trip. I listened on my computer.

This was the first time I had ever experienced an audio book. I will certainly listen to them in the future.

Not what I expected at all!

What would have made Coven better?

This audiobook was provided free of charge in exchange for an honest review by Audiobook Jukebox.

I often like witch books, but this one in particular just wasn’t for me, it just didn’t feel put together enough, and though it was meant to be a mystery, I knew the result from nearly the beginning.

What could Tony Ruggiero have done to make this a more enjoyable book for you?

The story itself, though not completely bad, also seemed to be a bit off. There were unnecessary scenes and boring conversations that I found myself wanting to skip over, and there wasn’t much dialogue outside that which the speaker had internally.

The narrator, Lisa Cordray though great at the beginning, begins to make the story feel sort of choppy and extremely slow. There seem to be unnecessary pauses and stops mid-sentence that slowly began to grate on me the further I delved into the world. Her various character voices also seem a little off.

I had high hopes for Coven. I haven’t read a witch book in a while and I was excited about getting started. This one though, was unlike any other I have read. At the end though, I was a bit disappointed

Told in multiple POV’s, we begin following Bob, a regular human who purchases an antique store after its prior owner dies in a vehicular manslaughter accident, an interesting fact considering he accidentally hit a drunk pedestrian many years ago, though the two pedestrians are not connected. The store he purchases is in a strange little town that has secrets of its own. He soon learns that sometimes, things are too good to be true, because it’s not a coincidence that he arrives. This town is full of magic, and everyone is connected in some way. This is a dark story, aimed toward someone who enjoys mysteries with supernatural elements.

Coven is the story of witches, some of who walk the correct path, and others who do not, and their interactions. I give it 2 stars.

What did you love best about Coven?

The portrayal of the small innocent town run by a Coven of witches was engaging. I wanted the hero to succeed but I was worried. The ending could have gone a few ways. The "Read of the Wicca" was a good touch.

What was one of the most memorable moments of Coven?

One of the store owners is killed and you start to wonder if the 2 female antagonists are in it together. This was the turning point for me.

Lisa has a great voice and could act out the parts with emotion and drama. Her "Julia" voice was alluring and sexy.

I listen in the car on my travels around New England so I had to break it up a lot. I never read anything in one sitting- I like to look forward to picking it up again.

I would like to read more by the author and hear more from the narrator!

Would you consider the audio edition of Coven to be better than the print version?

Throughout my reading of Coven, I moved between the two. I always find audiobooks easier to fit into my day, but there is nothing like relaxing with the actual book in your hands when day is done.

What was one of the most memorable moments of Coven?

Naturally, the finale when the quiet hero is fighting a distant but parallel battle against evil with the active protagonists was the highlight of the book. The fear that at any minute, good will succumb to evil. [Mild spoiler] I was enthralled at the point where Martin breaks into Bob's apartment and learns he must summon the coven to save the day.

Her voice was always eager and excited. She rendered an excellent portrayal of the silent voice that spoke to Bob.

As the book progressed, especially in the final quarter, I simply could not stop reading. I saw aspects of the end approaching, but not so much that I could predict the outcome. I have tried to avoid putting spoilers in this review, so I will only say that I feared a far grimmer outcome.

I highly recommend The Coven to anyone looking for an enthralling escape. I loved the thrill of the fantastical horror superimposed over the cozy setting of the small town. I own and have enjoyed other books by Tony Ruggerio, but this one is my favorite yet.

The narrator of this book did a phenomenal job engaging me in the story, All I can say is I want more from Lisa Cordray. Don't delay and listen today!

What made the experience of listening to Coven the most enjoyable?

The story is tightly told leading the reader on a journey full of mystery and suspense. Blink and you might miss something! The story accompanied by a gifted narrator makes Coven a rare find.

The suspense and the way the narrator brings it to life. The incorporation of elements of Wicca are very interesting and well used.

What does Lisa Cordray bring to the story that you wouldn’t experience if you just read the book?

She doesn't just read the book-she is part of it!

Highly recommend this book to anyone who likes a mystery/thriller type of read.

the narrator kills this book. very poor performance. cannot listen another annoying minute save me!