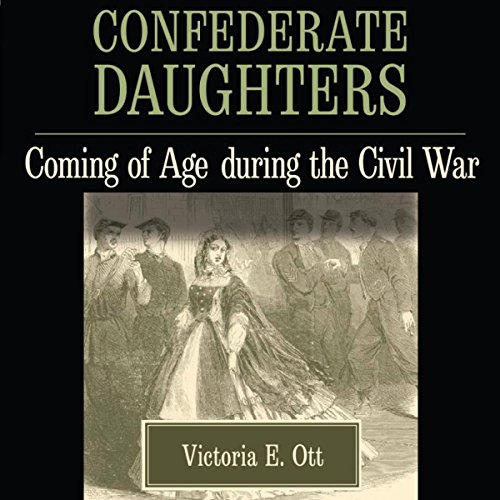 By: Victoria E. Ott
Narrated by: Lillian Rathbun
Try for $0.00

Confederate Daughters: Coming of Age During the Civil War explores gender, age, and Confederate identity by examining the lives of teenage daughters of Southern slaveholding, secessionist families. These young women clung tenaciously to the gender ideals that upheld marriage and motherhood as the fulfillment of female duty and to the racial order of the slaveholding South, an institution that defined their status and afforded them material privileges. When differences between the North and South proved irreconcilable, Southern daughters demonstrated extraordinary agency in seeking to protect their futures as wives, mothers, and slaveholders.

From a position of young womanhood and privilege, they threw their support behind the movement to create a Confederate identity, which was in turn shaped by their participation in the secession movement and the war effort. Their political engagement is evident from their knowledge of military battles, and was expressed through their clothing, social activities, relationships with peers, and interactions with Union soldiers.

Confederate Daughters reveals how these young women, in an effort to sustain their families throughout the war, adjusted to new domestic duties, confronting the loss of slaves and other financial hardships by seeking paid work outside their homes.

" Confederate Daughters is an engaging and thoughtful study of the role that young women played in creating, sustaining, and remembering the Confederacy." (Amy Murrell Taylor, author of The Divided Family in Civil War America)
" Confederate Daughters adds a fascinating and important twist to questions about the war's impact on southern white women." (Jane Turner Censer, author of The Reconstruction of White Southern Womanhood, 1865–1895)

What listeners say about Confederate Daughters

Great book. interesting topic. makes me wonder how teens today would fare in such circumstances as these.