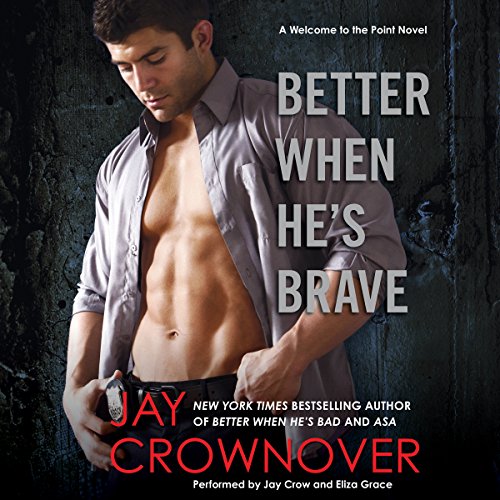 By: Jay Crownover
Narrated by: Jay Crow,Eliza Grace
Try for $0.00

Some men are just better when they're brave.

Welcome to the Point...

Titus King sees the world in black and white, right and wrong. That is why as a teenager he left behind the only family he'd ever known to make a better life for himself. Now a police detective in one of the worst cities in the country, he can't deny his life has turned into a million different shades of gray.

The new criminal element in the Point has brought vengeance and destruction right to Titus' front door, and the difference between right and wrong is nothing compared to keeping those he loves alive. To add to his already strained moral compass, the beautiful and mysterious Reeve Black has made her way back to town, and she might be as dangerous to Titus as the guy trying to destroy the Point. Titus needs her in more ways than one.

Reeve knows all about how ruthless this new threat to destroy the Point can be. Instead of running away, she wants to help. She has a lot to repent for, and saving the city, plus the hot cop that she hasn't been able to forget, might just be the only way she can finally find some inner peace.

With an entire city poised on the brink of war, Titus and Reeve stand in the crossfire - and it will take two brave souls to fight for the ultimate love.

What listeners say about Better When He's Brave

just couldn't make it through

I'm sorry I couldn't stand Elizas voice any longer. I made it through to the 6th chapter and she just didn't do it for me. I couldn't finish the book. She seemed to be just reading the words and not actually being the character. And the constant talking about Titus' BLUE eyes and manly looks. Ugh, I get it! I just couldn't get into this book. I listened to the others with no problem not this one.

THE BEST ONE YET

I love this new series from Jay Crownover, but you must be warn it is a bit on the dark side. This book is not the typical good girl meets bad boy, the roles are reversed and bad is every kind of bad you can think of.

We meet Titus King as the brother of Bax in Better When He Is Bad. Titus is a cop and he has a mission to destroy the one man that has been causing havoc around The Point the person will surprise you. I had no idea who was kidnapping, killing and blowing up buildings. Although The Point is the wrong side of the tracks not everything in this word is black and white, sometimes there is gray. When he meets Reeves his mission now includes saving and protecting those that make The Point.

You meet Reeves as the betrayer of every person she meets, she knows how to do one thing and that is the use people to get what she wants. When she finally thinks she's in love it's with the wrong person, but when she does find REAL love she is on a mission to repent all her sins and make all the wrong she has made in the past, right again, even if it kills her or worse destroy the possible future she has with Titus.

Not everything is what it appears to be and this book has more twists and turns in it my head was going to explode. This book had to be the best of all The Point series.

Another fantastic book by Jay Crownover!

I love this book! Really I have never been disappointed by Ms. Crownover. All her characters have depth and are very complex. She created a completely believable world to get lost in. I listened to this in one setting. I don't even mind waiting for the next in her series to be released. Each book has an ending and I know that the next will be as good as the one I just finished. Get this book. Just make sure to read the other two first!

Jay Crownover never disappoints. This is a super installment to another great series. Strong characters with plenty of heart. Perfect.

This story kept me engaged. I was guessing the whole time. Perfect mixture of suspension and romance.

Even Better When He's Brave

Crownover's Point series steps up the danger as we move on to another character mixed up in this seedy and dark place. This story was surprising but no less sexy. The intensity, suspense and sexual tension is freaking delicious. Readers dive into a world where it just might be good to be bad, even better to be bold, and still even better to be brave.

The narrators give a spot-on performance, conveying all the emotion and the danger. This series was meant for audio. Don't miss out on the experience!

I REVIEW for the Guilty Indulgence Review Site.

I love Jay Crownover books. they are written well and I find then very interesting.

Love these books. Jay Crownover can't get books out fast enough for me. 5 stars

Can't wait for the next story! Loved how they bring the whole crew with them to each story...
But, none will touch Bax's story!

Beware spoiler alert !! Titus and Reeve's story did not disappoint 👍🏻Titus is my favourite character and had been from the beginning, I wanted him to get as much of a HEA the characters of the point ever get !! It was hard going, bloody and brutal but he got it ...at least for the moment 😧outstanding again Jay you are definitely one of my 'go to' authors !!

Well, non stop action. I was hooked from the beginning. Having waited for what seems like forever for Titus! I was not disappointed. This is a standalone novel, but includes all the characters (and more), from the previous 2 "Welcome to the Point" books. Though it isn't necessary to start at the beginning, it does assist in the understanding of 'The Point' and all that live there. It follows a Detective, Titus King, and the beautiful, Reeve Black, who is in witness protection. The story centres around a "new to the Point" criminal mastermind and ex lover to Reeve, Connor Roark. Titus and Reeve work together, amidst, bomb scares, murder and shootings to try to bring Roark and his empire down. This book is full of twists and turns, as well as a full on love story that just goes to show that opposites really do attract. Looking forward to Nassir's story. Highly recommend.

Yet again a book that you had to just keep listening to. Our author manages to keep as glued to the storyline and I cannot wait to listen to the next one in the series.