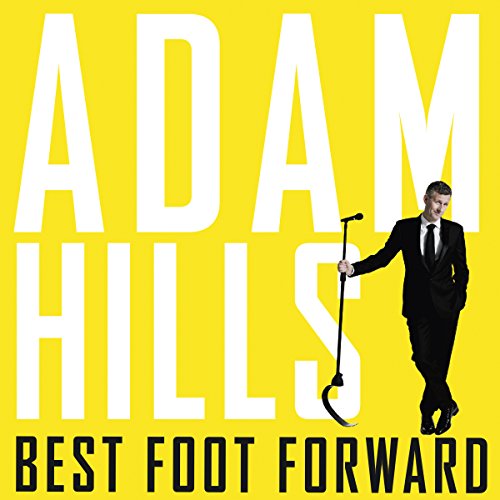 Adam Hills was a quiet primary school kid with a prosthetic foot, who did all his homework and only spoke when spoken to. His dad sparked in him a love of comedy, and together they'd spend hours watching and listening to the greats like Peter Sellers and Mel Brooks. So, when it was Adam's turn to speak, he made sure he was funny.

Once he hit high school, comedy was Adam's obsession (along with a deep love for the South Sydney Rabbitohs). While his mates were listening to Iron Maiden and AC/DC, he was listening to Kenny Everett and Billy Connolly. And when a report card came home with a comment praising his sense of humour, he was far prouder of that than his grades (his mum not so much).

Adam's shyness and his missing foot never held him back, though wearing thongs was tricky. While other teens snuck off to meet girls and drink cheap booze, Adam snuck off to see a young Jim Carrey perform. After that, a steady diet of Rodney Rude, Vince Sorrenti and Robin Williams led this sheltered, virginal university student from The Shire to his first stand-up open mic night on his 19th birthday.

In Best Foot Forward, Adam describes his early years on the Australian comedy scene sharing gigs with Steady Eddy and Jimeoin, how he coped the first time he died on stage, his early morning apprenticeship in radio, touring the world's comedy festivals, the magic of Spicks and Specks and his hosting gig for the 2008 Paralympics that led to his ongoing hit UK TV show The Last Leg. Whoopi Goldberg, Barry Humphries, Billy Connolly, Kermit the Frog - Adam's learned from the best. This charming, witty memoir is a lesson in following your heart, being positive and discovering that what makes you different also makes you unique.

I remember listening to Adam as a kid doing breakfast radio in Australia. He is extraordinarily funnily. I love his impressions of accents - and Advance Australia Fair to the tune of Working Class Man was genius. The most amazing thing is how uplifting and positive he is. This book is a bundle of positivity for comedy fans - or anyone really. Who needs self help books when they can listen to Adam Hills for 8-odd hours??

Just like his stand up shows this book is both funny and obviously comes from the heart. I thoroughly enjoyed at and highly recommend it. It was so great to hear it from Adam himself.

Loved it! Loved that it was Hillsy himself reading with extra bits. So genuine and hilarious. I’m about to listen all over again.

It was quite interesting but a little bit too much name dropping. Overall a good listen but not riveting.

i couldn't have asked for anything better than Adam reading his own book. So much better than if I'd read the hard copy myself. So many LOL moments. Fantastic!

I have always really liked Adam and his style of comedy and performance. As a disabled person myself watching him just be himself and achieve has been an amazing feeling of inclusion. Now hearing his story has just cemented the fact that he is a gentleman from a wonderful family. A truely lovely and inspiring read.

loved it. great to see an Aussie conquer his dreams and the world. but please have a drink of water before recording... the dry mouth audio made me thirsty

Adam’s story is brilliant and inspirational. His success is deserved and he is truly an amazing human. As an Australian we love his comedy and his work ethic that has him where he is today. His narration on this book perfect and truly makes you feel like you a listening to an old friend. Well done.

This wonderful story has been the surprise of my year. Written and read by Adam himself, it feels like he's just telling a yarn to a mate. Funny, clever, surprising, touching. Adam has had an amazing journey, populated by incredible people. But above all he is so humble. There are many little gems in this book but I shall take away the advice, "Turn up on time, and be nice to everyone. "
Thanks Adam for sharing.

Perfect balance of autobiographical and humorous anecdotes! Narration by the author is key, and spot on! Thoroughly enjoyable. Possibly the quickest I’ve listened to an audiobook.

Absolutely loved this. An autobiography narrated by the writer done brilliantly. Do yourself a favour.