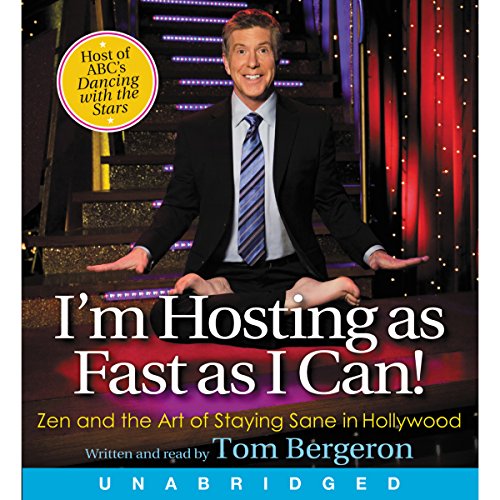 I'm Hosting as Fast as I Can!

I'm Hosting as Fast as I Can!

He's one of the most ubiquitous men on television. Certainly the most calm, cool, and collected...the king of "off the cuff". And no one throws to a commercial better. Yes, Tom Bergeron is a Hollywood staple, and the role for which he is best known is...well...himself.

But while he's a comforting presence to millions of people, cultivating this seemingly unshakeable positive outlook and cool persona took as much motivation, inspiration, perseverance, and experience as it would take one to prepare a classic part for the stage. I'm Hosting as Fast as I Can! is the trying, often laugh-out-loud journey it took to get to himself.

Tom got into the world of entertainment by way of local radio at age 17, hosting what his first boss told him was and should have been a "no-personality station". He said, "Tommy, just play the records and read the commercials". But the sit-down-and-shut-up attitude belied Tom's natural inclination to inject personality and a little pluck into his broadcasts. So Tom sought other performance opportunities on radio, in improvisational theater, and even as a mime (yes, a mime), which would help him hone the expressiveness that seems to come so naturally to his presentation. His determination would result in a high-profile hosting gig on the iconic game show Hollywood Squares and guest-hosting appearances on ABC's Good Morning America and CBS' Early Show.

But as is sometimes the case with enthusiastic dynamos like Tom, he had an explosive temper that he admits had the potential to derail his dreams of being not only a successful broadcaster but also a successful husband, father, and friend. How to cope? "I meditated my temper into submission," says Tom with his trademark sense of humor. In I'm Hosting as Fast as I Can!, Tom elaborates on the process by which he is able to sit calmly and patiently, without being distracted, at any time, no matter how hectic, as well as respond quickly (and hilariously) when Marie Osmond faints at his feet on live TV. Haven't seen it? Check it out on YouTube. The man is always in control.

What listeners say about I'm Hosting as Fast as I Can!

Hearing the author's voice read his own words is always wonderful, but for the author to be Tom Bergeron is just plain fun! Living in New England I've known of Tom Bergeron for decades, but it was neat finding out so much more about him. Really liked this book.

I really enjoyed this! Especially glad that the author narrated it!! Would love to see another book by Tom in the future!! One celebrity I would love to meet some day!

Tom Bergeron takes us on a whirlwind tour of his career and life so far as a host of various shows on TV and radio. It's everything you wanted to know about Tom but didn't know to ask. I enjoyed the candidness and outright humor of this book. I couldn't imagine anyone but Tom reading this material. I admit I am somewhat biased being a fan of Dancing With The Stars and Tom Bergeron generally. But, that aside, this is a good book and definitely a good listen.

Tom does a great job at "hosting".