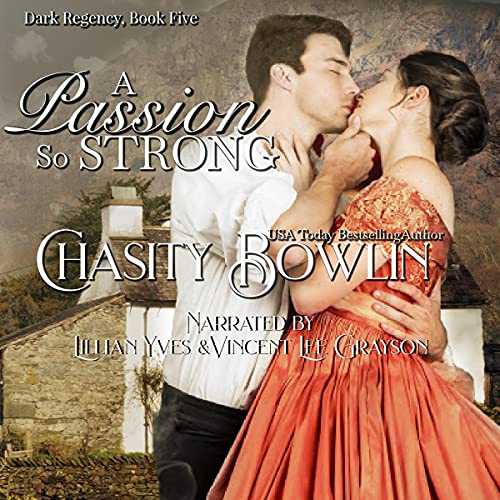 A Passion So Strong

When an old acquaintance asks Lord Sebastian Strong to look into the strange goings on at a remote family property, he agrees, naturally...for a price. After all, as a younger son, he has to make his own way in the world. If that means convincing a gaggle of spinsters in the throes of senility that their ancestral home isn’t haunted, he’s game for it. But when he arrives at Evenwold Manor, the woman who greets him looks like no spinster he’s ever encountered. And the ghosts prove a great deal more real than he ever imagined. But if investigating the haunting gives him an excuse to remain in her presence, he’ll do it happily and for as long as he is able.

Lady Anne Everleigh had more problems than she knew what to do with. Between her aunts dabbling in what they liked to call the craft, and a neighbor who was a bit too zealous in his pursuit of her and his interest in the reported treasures hidden at Evenwold, she was forced to seek outside assistance. When she asked her nephew for help, she’d assumed he’d have a talk with the Squire and put him in his place. Clearly, they’d prioritized her list of problems differently as he’d sent a man to investigate the growing ghost problem at Evenwold. No, not a man. A rogue. A charming, impossibly handsome, and sinfully tempting rogue. In short, he’d created an entirely new problem for her.

With her lecherous neighbor, her craft-dabbling aunts who are busily playing mystic and matchmaker by equal turns, she finds herself thrown together with Sebastian again and again. Even though she fears he will break her heart, she succumbs to temptation...but is it lust or love? And what will happen once he has the answers he came for?"

What listeners say about A Passion So Strong

Love This Author, Love the Narrators

I’m a huge fan of Chastity Bowlin books. Romance, suspense, mystery and in this case paranormal
Writing that keeps your interest, always wondering what the next turn will be and then never disappointed
The narrators play perfectly off one and there’s. With a variety of voices, emotion, tone, and pace I hate to come to the end of the book
Highly recommend and all Chastity Bowlin books and anything narrated by both or either of the narrators
I received a free audiobook for an honest and voluntary review

The fifth installment in the series is pretty nice to listen to, though I've found a little less chemistry between the main characters there than in the previous books. Not that they are not nicely written or uninteresting as people, but the mystery behind Anne's birthright and heritage overwhelms the romance and the sparkle between her and Sebastian feels a little dimmer, if you know what I mean...:)

That said, I like the "witchy" mystery, the shadowy villain and the mystical "powers" that fill the pages of the book. And although I feel the ending a bit rushed and kind of "that was almost too easy", I generally liked the story a lot.

As for the interpretation, I liked the parts read by Vincent Lee Grayson a bit more than Lillian Yves' narration; I felt she tended to make her heroine sound on the brink of hysteria a little too often for my liking. On the other hand, Sebastian in Mr Grayson's interpretation did sound like a menacing predator on a hunt a few times, so....:) But overall it's a nice interpretation of the book and it's a solid 3.5 start for it for both narrators.

Absolutely loved this story! Wished I'd been able to have heard the first 4. Great storyline, characters & plot.
I was given this free review copy audiobook at my request and have voluntarily left this review.

Lady Anne Everleigh has a problem. Actually she has several. Her aunts are more than a bit batty, her country abode, while humble, is a bit, well, haunted, and the townsfolk are convinced she’s up to nefarious deeds! Then there are the dark forces at work that would seek her demise! Sensing all is not right, Lady Anne’s guardian hires Lord Sebastian Strong, a devilishly handsome rake and younger son with few prospects to go to Lady Anne and the Aunts aid. A Passion So Strong is a haunting, well written engrossing story with heat. The complex plot was revealed so clearly that I had no issues following or understanding the storyline. The narration was beautiful and superbly done! The emotion, and all the feels came through so clearly that I was able to completely lose myself in the story! I don’t know where the time went! I just know that it was a beautiful experience and I loved ever single moment! I’m still on cloud nine!

The male and female actors were absolutely fantastic! I fell in love with both the protagonist and hated all the evil doers!

This is the first book in the series that I’ve listened to. It worked as an entry to the series.

Oh how I love this genre - gosh, I must have quite a twisted mind (Lol!) Never mind, its ok to like certain type of story.
Well, this one is well written, a page turner, romantic, intriguing and oh, so enjoyable. Chasity Bowlin always delivers a great story!
Then we have that wonderful pair of narrators, Lillian Yves and Vincent Lee Grayson. I really enjoy what they do and how they do it.
I listened to a promotional copy of the audiobook version and this is my voluntary review of it.

thank for the free book and I loved everything about it, Lillian and Vincent do such a fantastic job together, makes you feel like you're there in the book with all those special moments and spells well done everyone 👏🏿👏🏿👏🏿 I would recommend this book.