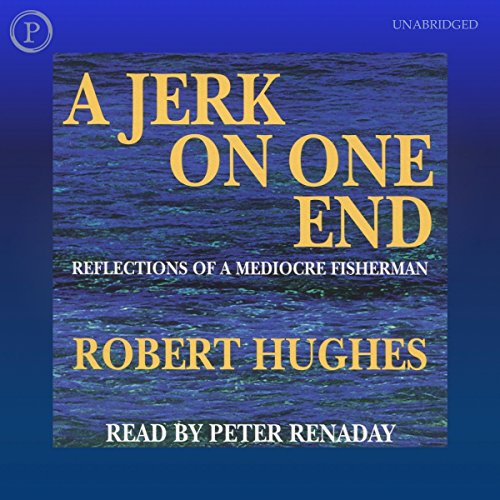 A Jerk on One End

A Jerk on One End

"In some ways it's a ridiculous human passion," Robert Hughes writes of fishing but, for him, it has been a lifelong obsession and the pastime that he loves best. In A Jerk on One End he brings the wit and insight that have characterised his art criticism to the subjects of fish and fishing. He traces his love of fishing to his boyhood on Sydney Harbour and recounts the high and low points of his career with rod and reel, from his first catch to hair-raising tales of shark hunts he has picked up from other fishermen. Mixing memoir and history with folklore and anecdote, he has produced an audiobook that is a celebration of the delights and beauties of fishing and, in its final ticks, a powerful and reasoned plea for the protection of the ecology of the ocean.

The first and only audiobook amongst hundreds that I simply couldn't listen to for more than a few minutes at a time.

Robert Hughes' engaging writing style was spoilt by a narrator who attempted to bung on an Australian accent. This woeful attempt consisted entirely of substituting the vowel sound 'a' with 'i' at every opportunity, making the whole thing sound stupidly fake and unlistenable.

So disappointing given the enjoyment I've had from listening to Robert Hughes in the past.

A great story, well written, meaningful Beyond the act of fishing and something everyone can relate too. Brilliant stuff Robert.