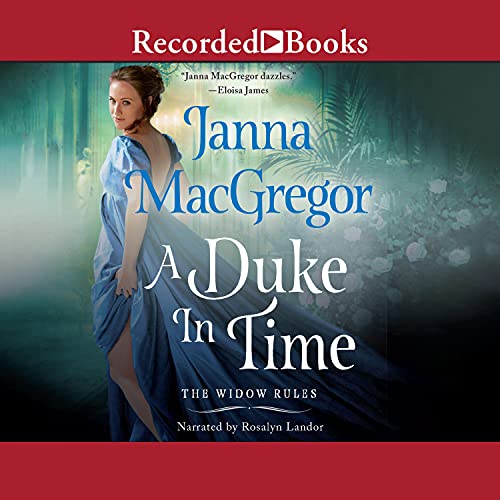 A Duke in Time

By: Janna MacGregor
Narrated by: Rosalyn Landor
Try for $0.00

Christian, Duke of Ranford and Meri’s far more upstanding brother, has no earthly clue how to be of assistance. He spent the better part of his adult years avoiding Meri and the rest of his good-for-nothing family, so to be dragged back into the fold is…unexpected. Even more so is the intrepid and beautiful Katherine, whom he cannot be falling for because he’s emotionally closed off and all that nonsense. Or can he?

With a textile business to run and a strong, early friendship forming with Meri’s two other wives, Katherine doesn’t have time for frivolities. But there’s something about the pained and compellingly taciturn Christian that draws her to him. When an opportunity to partner on a business venture draws them even closer, they’ll have to learn to face their past fears if they’re to live and love in the present.

Contributor Bio(s): Janna MacGregor was born and raised in the bootheel of Missouri. She is the author of the Cavensham Heiresses series, which begins with The Bad Luck Bride. Janna credits her darling mom for introducing her to the happily-ever-after world of romance novels. Janna writes stories where compelling and powerful heroines meet and fall in love with their equally matched heroes. She is the mother of triplets and lives in Kansas City with her very own dashing rogue, and two smug, but not surprisingly, perfect pugs.

What listeners say about A Duke in Time

Good story and excellent narration. If it's a book that is performed by Rosalyn Landor it's almost guaranteed to be very good and worth the money.

MacGregor and Landor a match made in heaven !!! Interesting premise and excellent story an amazing start to a new series ! I can’t wait for the next installment. The main characters very well written and secondary players too. Rosalyn Landor is the best narrator in the business !

The story felt too long and made me loose interest. Still I finished it and liked the ending. Credit to Rosalind Landor for being such an amazing narrator.