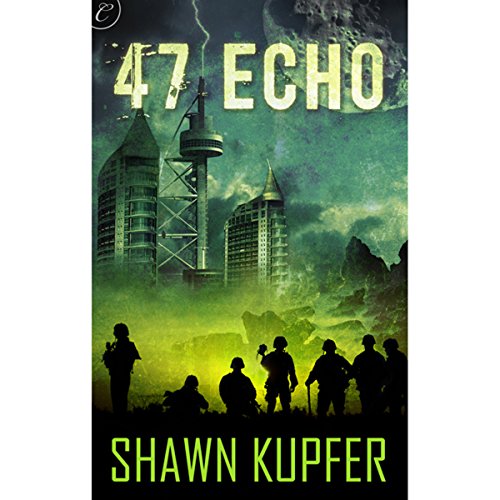 By: Shawn Kupfer
Narrated by: Victor Bevine
Try for $0.00

Russia, 2019. Combined Chinese and North Korean forces have taken increasing amounts of territory in a war that is devastating the world.

Nick Morrow is a convict conscript assigned to 47 Echo - a suicide squad. No one cares whether they live or die, as long as they complete their missions. Under the command of a Marine Corps with nothing but contempt for its squadron of felons, they are on a mission to defend what's left of war-ravaged Russia.

A half-Chinese drifter, much isn't expected of Nick. Like the other members of 47 Echo, he's viewed as little more than cannon fodder. However, Nick's sense of honor, analytical mind and skills on the battlefield just might be what the squad needs to survive the meat-grinder that is the front lines of this bloody war. But can Nick himself survive the brutal crimes that haunt his past?

What listeners say about 47 Echo

I stumbled across this book awhile back and it has been waiting in my library. I wasn't expecting much (a few good battles, a spot of suspense) but I was immensely surprised. The action speeds along and the characters aren't completely 2 dimensional. I found myself rewinding at times to catch bits I had missed.

I didn't find the soldier-convicts referencing each other (including the team leader) by first names as odd, given that they are essentially a group of convicts ripped from prisons to serve on a suicide squad. They have no military training and are outfitted with subpar equipment and uniforms (the book opens with newbie Nick being presented with boots taken off a corpse, one Size 12 and one Size 11.5.) Using first names seemed a logical reaction to the dehumanizing way the "true" military referenced them with numeric designations. I did find it unlikely that the "real" military officers would also accept this breach (as did occur in the book), but I was enjoying it too much at that point to be bothered.

The narrator, Bevine, does a fair job of moving the action along, but he doesn't really differentiate the various characters all that well. E.g, there is a character from the South who sounds little different from the other characters. Although this lack of character signatures didn't bother me greatly, more uniqueness to the various voices might have served to avoid a bit of the confusion when the action sped up.

This isn't brain candy and doesn't delve into the world dystopia (we get only glimpses), but if you looking for some "light" military action, I highly recommend this volume.

I loved this book most of the way through. I wish it had been a little longer with a few more trials for the guys. I felt like I was just getting to know a few of the characters well enough to want to know more. I normally won't buy a book unless it is over 10-12 hours long. I heard about this one through a friend though and decided it would be worth the listen. It was worth it and I'd love to hear more from Shawn Kupfer. The narrator was brilliant and I will be looking for more of his work as well.

I was really surprised by this book. I was not sure what I was looking for and I came across this book and listen to the clip and decided why not. It turned out to be one of the best books I have listened to in a while. The characters were interesting and well developed that you did not want to see anything happen to them and the setting was great. A different take on global events and happenings. There is still a back story I would like to find out more on, the only disappointment would be how the book ended, a bit lame. But definitely a recommendation. You read this knowing that this is not a Tom Clancy or Harold Coyle.

I enjoyed this book. I found it through the narrator, Victor Bevine, whom I enjoy on David Drake's RCN series. I'm glad I did. The story is interesting, and narration excellent. I have a very minor quibble with the flow of the story; it can seem abrupt or choppy in a few spots. Overall a good book, and I look forward to more from Shawn Kupfer.

This book is not at all realistic. As other reviewers have said, it just does not make sense that someone with no real military training turns out to be a tactical and strategic genius. However, the book is just FUN! Action-packed and entertaining, with some humor thrown in. The reader does a good job of giving the major characters their own voice, which helps. All of that said, it isn't perfect. There are a lot of characters to keep track of, and (as I said above) it isn't at all realistic. But it is worth the listen.

I kinda like this story, at least the setting, near future, and the premise (so far) convicts' redemption as soldiers, marines, no less.

But I find a couple things off-putting. One, which is odd, is all these soldiers addressing each other by their first names. WTF? I'm not familiar with Shawn Kupfer as an author, but I find it difficult to believe he's actually been in the military. There a lot of references to specific weapons and weapons systems, but attempts to portray intimate comaraderie in combat fall flat.

I just can't see a military team, in combat, saying things like "Okay, Todd, you take Mark, Benjamin, and Steve, and cover our left flank. Bill, Jeffrey, and Pete and I will provide cover fire with our M-4 assault rifles." And I get it, the Razor (fighting vehicle) is HUGE, it's big, got it. 24 cylinders, and it's powerful.

This is my first book narrated by Victor Bevine. I hope it's his first too. I mean, I hope he get better as a narrator. He's okay, has potential, but not great.

So, because this book has some interesting ideas, I'll give it 3 stars. If the story was any weaker, though, it'd be pushing it to give it a 2.

Okay, as long as you don't think too hard...

It's mostly an action novel... a military action novel. Originally I had it tagged sci-fi, but there is no science fiction here. (The tech is current-day stuff and the social setting is entirely feasible.)

It is a bit unbelievable in how the main character went from newbie convict to super-hero-soldier, but as long as you don't really think about it, it doesn't ruin the story. In other words: don't try to pick holes, or the entire thing will fall apart.

As an action novel, it was fast paced and intense but not gory. The setting and situation were believable (i.e. that war could happen, and the military could need convict soldiers). There was not much gun porn, so we aren't told the bullet types or firing speed of each gun, though most of the guns are named (i.e. M5, Glock, etc). That is - most, but not all: the level of detail consistency is not 100%. Sometimes we get quite an in-depth description of [insert object name/action here] and then next chapter it goes back to "an assault rifle" or a "bullet hit him"

All in all it was a quick, entertaining, and not very deep read. The narration was okay. There is not much differentiation among characters, but I don't think the author really put much into differentiating them either, so the narrator isn't wholly to blame. There is some swearing, no sex and no gore. I'd read more by this author.