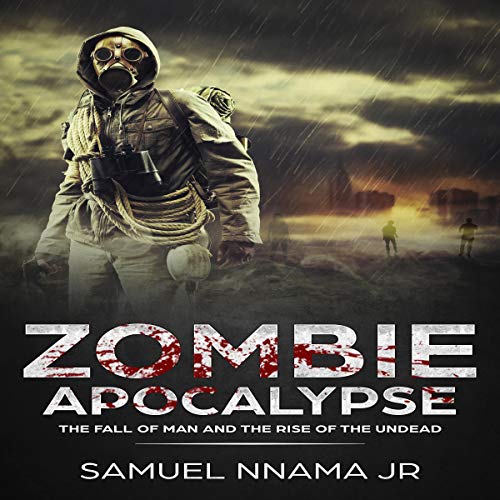 Zombie Apocalypse: The Fall of Man and The Rise of the Undead

With the world facing the ultimate chainsaw massacre, it takes some bad-ass generals and a couple of men in military suits to implant a scheme that will give the world one last ass to lick! The licking needed comes from the stuck-up government which knows that to beat the virus that spreads like Moses and the locusts procedures will have to be broken to see if they can control the behavioral patterns of their prisoners that have no other instinct but kill…kill …kill. The patterns must be collected into data that they can understand.

But with trying to control behavior, you’ll first have to cut off the hand that breed its configuration. And that requires steps to take and none of them are pretty.

Hence, this is why the many characters compose themselves of the breaking down of not only all they’ve known and lived for, but the reasoning of something that nobody has ever thought would come into the daylight: an apocalypse! It involves those who peer down at the globe and say action bitches! The rest of society hopes to hell that all the barriers, police forces, and military will have unbreakable lines, but who knows? But all will have to compete to stay alive in these episodes.

Majors, generals, colonels, scientists, and even the president himself, who has no execution button to get rid, can run from the predicament of the United States that is infested with a species that reaches all the way to Chicago. And they’ll do their best to reach every other state as the ticker counts down to its last tick-tick-tick and they await the arrival of a plan that may fence a small fraction in bondage. But would the government be so selective in its choices?

The apocalypse does bring out the worse and the best in people. It’s just a little fuzzy at the moment of what the finale will be. Who knows? But they’ll have to think of something! Because the future is what’s at stake.

What listeners say about Zombie Apocalypse: The Fall of Man and The Rise of the Undead

I honestly do not understand the good reviews

Several of these 4 and 5 star reviews speak as if this was a movie or DVD that they watched. I can only think that the reviews got placed on the wrong item. This was a absolute train wreak of tiny short stories in one zombie apocalypse short story. The first 2 stories are just dribble and so is the last one. The couple in between were ok. Do not waste your time and money as I did! I am definitely returning this!

You get lots of action and some romance. I loved how this story was told from the point of view of several different people.

Excellent series, keeps you reading long into the night! I can't believe how good this is for the price! Just buy it, no disappointment here!

I liked the different take on contracting the "zombie " virus, the focus on how it integrated into normal life, and focus on how everyday life would be changed.


every one of these books is great! i was so sad when I reached the end! you won't be disappointed!

I'm still giving it 5 stars because it is the most novel take in the zombie genre, making them human so the story develops a wallop of an emotional punch.


I loved this series. I've read many zombie genre anthologies and this really is the best out there. The characters are well developed, the story is intriguing, and the author doesn't rely on stereotypes like many others in the genre. If you're looking for an engrossing new read, this is it!


I love this series. It was well written, I loved the take on the zombies but mostly I really enjoyed the characters. Good read. I cried, laughed and raged!


Excellent story line not so much about zombies as it focuses more in the stigma of having a deadly virus. I normally would pass on a series like this because of the perceived lack of zombies. Glad I didn’t pass this up great story line wished the series continued!

The bravery and the kindness that was shown through it all was inspiring. If this were ever to come about, I most certainly hope to either find or operate a catch.

Couldn't get past the first 30mins. Can't understand these positive reviews. This reads like a school assignment written by a 12 year old. Absolutely awful

I normally would pass on a series like this because of the perceived lack of zombies. Glad I didn’t pass this up great story line wished the series continued!

The bravery and the kindness that was shown through it all was inspiring. If this were ever to come about, I most certainly hope to either find or operate a catch.


This is the most reasonable reading technique improvement book ever. Through out the book, I have been reminded to read through conceptualization and I feel that my way of reading being corrected.


This is THE best series I have ever read, hands down! At one point in the story (as I was reading at work) I just sat at my desk and cried.


In most Zombie tales the story line is pretty common. TOO common. There's an outbreak, a virus that is spreading

You don't have to look very far to find the strangest behavior exhibited by humans. Just take a close look at any human you come across.

Really enjoyed this book. It was really well written and well thought out. I liked how the writer went back a little and explained how each character got to the others.

There is an interesting storyline, definitely worth your time, that you will get caught up in. You WILL enjoy reading this series. Exciting, deadly, action, some by the seat of your pants. Good stuff! Pull up a chair, relax and dive in.