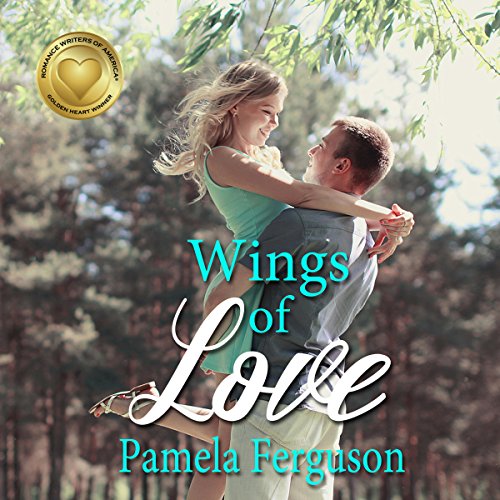 By: Pamela Ferguson
Narrated by: Stephanie Dillard
Try for $0.00

Wings of Love won the 2017 RWA Golden Heart® Award for Romance with Religious or Spiritual Elements.

Will Reo Greene ever learn to say no? She's just finished organizing Lilac's first 5k race and is swamped with Online college exams. Now, the mayor wants her to collaborate with Jack Warfield to evaluate Main Street decoration proposals for the town's upcoming 250th anniversary. The last thing she wants is to work with the man who rejected her five years before, but the mayor is determined to make an example of the two former high school enemies. If Reo and Jack can collaborate for the good of the town, maybe everyone else will try to get along.

Back in Lilac to oversee the sale of his mother's rental property, Jack doesn't admit he's also on a leave of absence from his new job as a Peacetalkers mediator. He got injured as a result of an unauthorized meeting, and the Peacetalkers must investigate. Even if the mayor is twisting his arm, Jack has no interest in collaborating with Reo. She'd already destroyed his college football scholarship chances. He'd be crazy to let her mess up his life again. Will past mistakes prevent Reo and Jack from discovering their true feelings?

What listeners say about Wings of Love

This is a lovely story! It is clean and has no foul language so you can listen to it without worrying who is around.
Reo Greene and Jack Warfield are thrown together for a project in the Texas town of Lilac. They had an unresolved conflict which resulted in huge consequences in both of their lives. How will they be able to get past it and work together now? The main characters have flaws and their goals don't magically fall together. This story was refreshingly honest and satisfying.
This book was given to me for free at my request and I provided this voluntary review.

This is a sweet romance about Rio and Jack. They have a spotted history in small town and would be the best of enemies. As small towns go, the rumor mill adds more fuel to the flame. Due to past pain from father and mother wounds, the couple is unable to see the good in the other until they are forced to work together on a community project.
I love the simplicity of this story. These are two people with good hearts who only want to help other people. In the end, they end up helping themselves find true love.
I was given this free review copy audiobook at my request and have voluntarily left this review."

Wings of Love by Pamela Ferguson is full of hope, love and inspiration. I found the story to be refreshing with its wholesome values. Good hearts who want to help others was one of the main vibes I took away from this book. I requested this review copy audiobook and have voluntarily written this review. The performance by Stephanie Dillard was spot on. She had distinguishable voices for the various characters, which is something I really enjoy. I would definitely listen to more books by both the author and narrator in the future.

SWEET STORY, WILL LOVE WIN OUT?

I really enjoyed this sweet story. What could go wrong in a town named Lilac? Well, listen and you'll find out haha. Love, unresolved issues, conflict, love - it was well written and narrated. I love small town craziness, and this was a great story I think anyone would love :)
I was given this free review copy audiobook at my request and have voluntarily left this review.

I received this audiobook free for an honest review. I loved this story. This story is honest, wholesome, clean and a delight to listen to. Wings of Love is not without turmoil, but listening to Reo and Jack work through them was very enjoyable. Gonna find more stories by Pamela Ferguson. The narrator did an excellent job with the characters and their personalities.

This was a nice, spiritual book about forgiveness and love, no bad language. The narrator was good made the story that much better. I was voluntarily provided this free review copy by the author, narrator or publisher,

What made the experience of listening to Wings of Love the most enjoyable?

This is a light hearted romantic story with surprising depth. I was not expecting the themes of forgiveness and putting the past behind. Enjoy this one, dear readers!

I was given this book at my request and am voluntarily leaving a review.

I received this audiobook free for an honest review. I loved this story. This story is honest, wholesome, clean and a delight to listen to. Wings of Love is not without turmoil, but listening to Reo and Jack work through them was very enjoyable. Gonna find more stories by Pamela Ferguson. The narrator did an excellent job with the characters and their personalities.

A feel good story that was well written with life lessons and obstacles to overcome. Stephanie Dillard did a great job with the narration. I am looking forward to more from this author and narrator. I was given this free review copy audiobook at my request and have voluntarily left this review.

This starts of slow, but we get a better picture of the characters and the people around them.
If you love small towns and its craziness with a sweet romance then this is for you.