Literature & Fiction | Romance
Debbie Macomber is a #1 New York Times bestselling author and one of today’s most popular writers with more than 200 million copies of her books in print worldwide. In her novels, Macomber brings to life compelling relationships that embrace family and enduring friendships, uplifting her readers with stories of connection and hope. Macomber’s novels have spent over 1,000 weeks on the New York Times bestseller list. Thirteen of these novels hit the number one spot. In 2021, Macomber’s all-new hardcover publications include It’s Better This Way (July) and Dear Santa (October). In addition to fiction, Macomber has also published three bestselling cookbooks, an adult coloring book, numerous inspirational and nonfiction works, and two acclaimed children’s books. Celebrated as “the official storyteller of Christmas”, Macomber’s annual Christmas books are beloved and five have been crafted into original Hallmark Channel movies. Macomber is also the author of the bestselling Cedar Cove Series which the Hallmark Channel chose as the basis for its first dramatic scripted television series. Debuting in 2013, Debbie Macomber’s Cedar Cove was a ratings favorite for three seasons. She serves on the Guideposts National Advisory Cabinet, is a YFC National Ambassador, and is World Vision’s international spokesperson for their Knit for Kids charity initiative. A devoted grandmother, Debbie and Wayne live in Port Orchard, Washington, the town which inspired the Cedar Cove series.
Read more Read less

A Quote by Debbie Macomber

You can't live a perfect day without doing something for someone who will never be able to repay you. 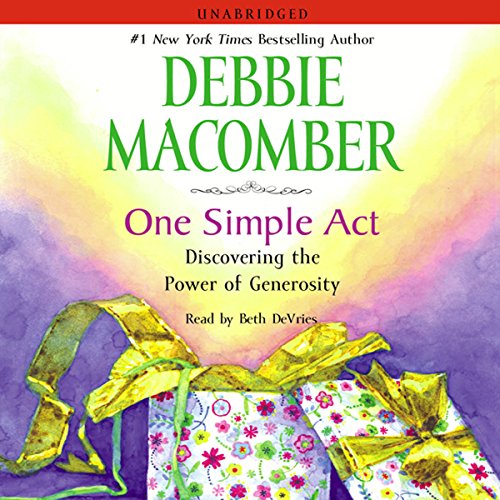 Annie Marlow has been through the worst. Rocked by tragedy, she heads to the one place that makes her happy: Oceanside in the Pacific Northwest, the destination of many family vacations when Annie was a teenager. Once there, Annie begins to restore her broken spirit, thanks, in part, to the folks she meets: a local painter, Keaton, whose large frame is equal to his big heart - and who helps Annie fix up her rental cottage by the sea; Mellie, the reclusive, prickly landlord Annie is determined to befriend; and Britt, a teenager with a terrible secret.

When all those she loved are taken from her in one fateful night, Annie Marlow is forced to figure out how to go on and be whole again. Going back to her happy place in a beachside town starts to do the trick, but it takes one tall, quiet man to help her get to the life she’s meant to lead. Karissa Vacker nails the sad yet hopeful notes of Annie’s character and blends in the strength—both physical and emotional—that her new love, Keaton, brings in this sweet and engaging love story.

Experience these 14 classic love stories from Debbie Macomber, available in audio for the first time.

Meet the Carter sisters and enter the fold of family and friends as they learn, grow, and love together.

Jo Marie Rose opens Rose Harbor Inn looking for a fresh start. But running an Inn comes with its own set of adventures!

In this small town, secrets don’t stay secret for long. Get to know the townspeople of Cedar Cove, one address at a time.

Welcome to A Good Yarn Shop, a little shop in Seattle where women can support each other and bond over knitting.

Feeling festive? Get in the mood for the season with these Christmas love stories and series.

Help us improve our Author Pages by updating your bibliography and submitting a new or current image and biography.
Visit Amazon Author Central