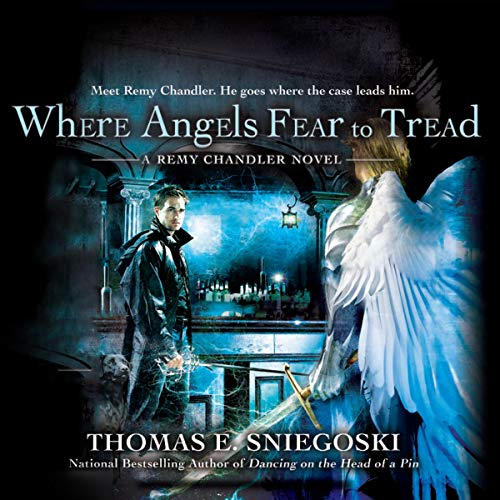 Where Angels Fear to Tread

By: Thomas E. Sniegoski
Narrated by: Luke Daniels
Try for $0.00

Six-year-old Zoe York has been taken, and her mother comes to Remy for help. He thinks the cops would be a better choice—until the desperate woman shows Remy why she chose him out of all the private detectives in Massachusetts.

There are drawings. Crude childlike drawings that show Zoe’s visions of the future. Everything leading up to her abduction, and some beyond. Such as the picture of a man with wings who would come and save her—a man who is an angel. This is more than a mere kidnapping.

Zoe’s preternatural gifts have made her a target for those who wish to exploit her power for their own destructive ends. And the search takes Remy to dark places he would rather avoid. But to save an innocent, Remy will ally himself with a variety of lesser evils—and his soul may pay the price.

What listeners say about Where Angels Fear to Tread

what's with the "Joisey" accent?

I love the Remy Chandler books so I figured hey! an audio book - super! and I listened to the sample (because I have learned) and Luke Daniels sounded good, so I bought it. OK - I have to say Luke Daniels sounds good UNTIL he gets to Remy Chandler. Now this super cool, awesome angel, working as a detective, golden armor hidden away, etc. speaks and OMG he sounds like a little caricature of a "Joisey" player! WHY!? Why on earth would anybody think this angel sounds like that!!??

This book's story line wasn't as good as the previous two. It was still very good and a fun read, but didn't quite live up to its potential.

However, though the story line may have had flaws there was a lot of great character development in this book. Remy seems to be coming to grip with the loss of his wife, and maybe even preparing to move on. Remy is also beginning to understand that he can be part human and part seraphim, and he seems to begin to embrace his seraphim part.

And once again, Thomas doesn't fail us in extending the world. My favorite scene was in Methuselah's Bar where Marlowe gets into some trouble with some unearthly customers.

What made the experience of listening to Where Angels Fear to Tread the most enjoyable?

This book was a good thriller about the 'last battle' and the outcome.

I liked the way the characters were introduced and how they played with each other. It wasn't judgemental, but interesting how the characters played to the outcome of the last battle.

I enjoyed his calm reading, no phoney voices, just his voice

This was one of the most thoughtly books I have read in a very long time. I enjoyed it a lot.

A great story, told by a great performer. Loved the toned up humor. Really amazing.

Remy sounds like he whines whenever he speaks. While his human voice must be different than his angelic voice, there MUST be a lower option for his human voice.

Remy Chandler audio books are great. Love Marlowe the dog. I hope there will be more of these audio books to come.

If you enjoy random violence, the free use of four letter words, and vampires, you'll enjoy this one. Other wise skip it!
The only good part is Marlo, the talking dog--- he is wonderful! But a real chore to listen to... If I hadn't bought this one, believe me I wouldn't be wading through it!
With so many great books that have never been make into audio, why this trash?

Para-normal and interesting, the narration is done quite well, I think you should start with book one, then two and this is book three. Not every ones cup of tea but I hope to see more Remy Chandler in the future.