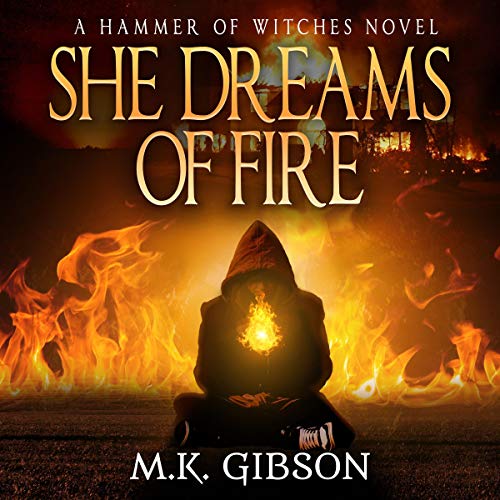 She Dreams of Fire

Agatha “Aggy” Grae was only 10 years old the night a witch of the Umbra Coven killed her mother and burned her home. Injured, she received a transfusion of blood tainted by witchcraft, and immediately her eyes were opened to the truths hidden from mundane eyes.

She saw a new world, a hidden world, one filled with darkness and secrets. And that new world was now aware of her.

Through the years, Aggy never quit hunting the mysterious coven. From the shadows she gathered information, stepping out only to hurt those who dared to hurt others. But everything changed the night she helped a familiar looking stranger.

Through magical means, Vanessa, a high witch of the Umbra Coven, has learned of Aggy. Following the orders of the coven's leader, The Veiled One, Vanessa has begun her own hunt, one that can end only with Aggy's blood.

She Dreams of Fire is a story of strength. In order to survive, Aggy must defeat her own doubts, addictions, and fears. In order to win, she has to endure everything the witches and the Hidden Folk throw at her. Partnered with a man from her past, the unlikely pair must learn to trust each other as they suffer betrayal, discover hidden truths about themselves, and battle the monsters in the dark. But does Aggy have the strength to walk through the fire?

What listeners say about She Dreams of Fire

SHE DREAMS OF FIRE by M.K. Gibson is a prequel to his wildly entertaining fantasy cyberpunk Technomancer series. The premise is a young woman has her family murdered by agents of a murderous coven of witches. Surviving to adulthood but becoming addicted to fairy blood along the way, she ends up with a talking carnivorous rabbit and a vigilante serial killer akin to Dexter. It's an entertaining novel with Michael Gibson's typical brand of humor, oddball characters, action, and fun.

Too much urban fantasy tries to be knock offs of the Dresden Files or Mercedes Thompson (both series I love but which have been copied to much). Instead, the author has established his own voice. This is great summer entertainment and the perfect book to read just for fun. Some people may object to the use of evil witches as an enemy or the real-life book title for the series but I think they worked quite well in this volume.

Amazing narration too. I can't wait for the sequel!

Such a fun and dark UF series

This is a new series by M.K. Gibson. I’ve listened to his work in the past with The Shadow Master series. It is a series I’ve really enjoyed with some dark humor to it. So, when I was given the chance to try a new series by him, I jumped at the chance. The fact that Xe Sands is the narrator was an added bonus.

This story follows Aggy. A woman with a difficult past. Her mother died when she was a child. Actually, that’s way to tame. Her mother was murdered and burned to death as she hid in from the murder. But she was a small child (six, I think), what else could she do.

There is also Marcus. He is former military and an EMT who found her and gave her a transfusion from the man who killed her mother (who didn’t live long from the injuries he received from the mother). That changed Aggy’s life forever.

Many years later, Marcus is now a doctor and saves lives. Aggy struggles with her life. She has a drug problem and a therapist. She also has a pet rabbit, who is a great character in this book. She also has a great friend in Ji.

Lastly, I need to tell you about the villain, Venessa. She’s a cop, but also a witch. She works on cases for both the coven and the human world. She isn’t a good witch or a good cop. She does whatever it takes to get the job done. She has no problem sacrificing human or supernatural to get her job done. And I mean sacrificing in the literal sense.

This is a great first book in a dark urban fantasy series. It has the right combination of suspense, mystery, and great characters. I really liked the mythology in this story. Some of it I was somewhat aware of, others, I’ve never heard of. While there isn’t as much humor as in The Shadow Master series, there is still some humor involved in the story (her aunts and Ji are great).

Narration
Xe Sands does a really good job with the narration of this series. There is a vast array of characters and she voices them all really well. I really enjoyed her voice for Ji, who was very flamboyant. She did a good job with both the male and female voices and the tone of the scene. If you haven’t tried her, I highly recommend her narration.

**I like to thank the author for providing me with a copy of this audiobook in exchange for an honest review.

Really good book does urban fantasy great. Establishes its own style draws from interesting yet not overdone mythos and has great character development. Only drawback is no-one seems to know about this book. Probably because the cover looks like the pumpkin I forget to put a candle in dark and orange but not very visible. I check for books quite often and I almost missed this as one of MKs works or just as a notable book in general because the cover isn't attention grabbing and doesn't make me think of MK Gibson. The name is also good but a little unclear until after reading the book.

When you were a kid with a candy bar, you'd unwrap it and take the first bite. Remember that first bite? Well that's how good this book was to me. I'm sitting here looking at the empty wrapper wishing there was more.

The story is well developed with characters that come across as realistically flawed. (Except the best friend.)

The main character, Aggy, is a half-breed who has the ability to change form. The story evolves around her hunting the witches who killed her mother. Her gang of side characters include a magical bunny, a guardian angel, and a serial killer. Enough said 🤣.

Aggy is not the usual gun wielding sword swinging muscled urban fantasy chick. She also isn't the bombshell beauty who annoys the reader by feigning humbleness. Her pain and struggles come across as genuine. Even with the classic parent tragedy and the cliche flamboyantly gay best friend, I found her story captivating.

Aggy is still hurt and unable to move on from the death of her mother. Revenge (and a bunny) drives her search for those responsible.

I love that this story has a real villian. Not some play-play bad guy, not a good guy who does some bad things, not a bad chick that you can sorta-kinda like... NOPE... you get the real deal. You get someone to hate and despise.

Quote: "She will hurt you like a man. You have to be a woman and endure it."

I think this is my first time with the narrator Xe Sands. She did an excellent job. Her tone throughout the book gave it a serious and semi-dark feel. I think she really captured how I imagine Abby would sound.

My record shows that I dont give these out lightly but it deserves it.

5 Stars 🌟🌟🌟🌟🌟 A-freakin-mazing Story! I laughed, I cried, I loved someone, I hated someone. I debate with myself how happy or sad this author has made me. I will talk to my boyfriend about what happened to the characters as if they are real people (and he will pretend to listen). The story telling is great and this book is one I'll return to in my time of need for something good to read.

This story encompasses so many tropes, I couldn't possibly classify it. There were characters who had PTSD, witches, EMTs, cops, mad scientists, fae, monsters, you name it. It was an interesting mix-up of heroes and villains. Definitely NOT my dad's urban fantasy. Sands did a mostly great job of narrating, and though her pronunciation of athame drove me bananas, the rest was great, so I didn't dock any stars. This was a new to me author, recommended by a fellow book friend. I would definitely recommend, and I eagerly await the audio of book two.

As for this book.

Again it's good. Slow at the start but once it gets going it is just as good as the rest. Again Ferrari comment still applies. However since it is a different narrator and she still did great... Get her a Tesla! One with all the fancy features on it. Also, I say this because of only one book so far (in this series). Looking forward to a second with her in it for sure!

This one I will admit is a slow burn for me. But again once you get in deeper, and things are more fleshed out then it sucks you in.

It was definitely a dark book, but nothing less should be expected from MK Gibson. I enjoyed the pathos of certain characters and the actions of others. I cannot wait for the next one.

Read this book if you want

Oh Jeez I just finished the book and it really good I loved it on top that it's a world building story in a pre G-day (if you don't know what that is go check out The Technomancer series ) Universe ,manh I can't wait to imagine what comes next but I can at the same time now I have to go back and listen to the other book attached to this book again

Al-Mi"raj was the best part of this book, but everything else was kinda cliche & boring. I think it was mostly the narrator's fault though.Even at the end, when the story finally started to pull me in, I couldn't get past this lady's irritating way of speaking. Hopefully book 2 delivers more and finds a different voice actor!

She Dreams of Fire
Hammer of Witches, Book 1
By: M. K. Gibson
Narrated by: Xe Sands
I read this before and loved it! I have recently been re-reading some favorite books and wanted to hear this in Audible. It is so good, even a second go round! I love the various fanciful magic, the many creatures that play the parts, the many emotions the book takes you on, and the terrific world building! There is also great humor! I just love this book! So many fun treats in it! A talking rabbit that can change shape, her aunts are the mythological three beings that shared an eye, and so many other great tidbits! Pure fantasy bliss!
The narrator did a great job also!

At first I wasn't sure about this one, but I've enjoyed the author's other work, so I decided to give it a try.
Fantastic decision! This was such a compelling, interesting and unique book that I was completely drawn intobthe world.
The narration was excellently done as well.
I would absolutely recommend this to any fans of Urban Fantasy!