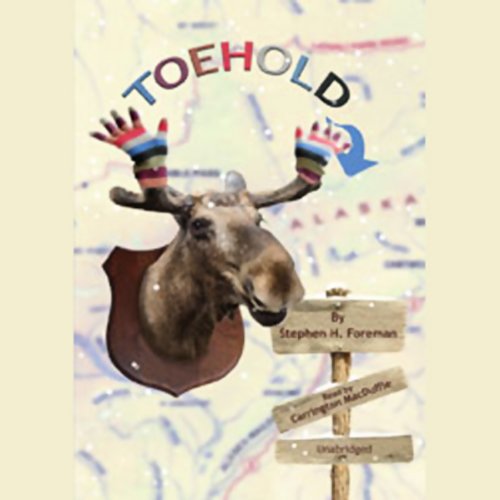 By: Stephen H. Foreman
Narrated by: Carrington Macduffie
Length: 9 hrs and 19 mins
Categories: Fiction, Contemporary
3.5 out of 5 stars 3.3 (18 ratings)
This title is included in Audible Escape

Toehold, Alaska, population 200, is a bush village about as far away from the world as you can get without falling into the Arctic Ocean. The residents are a motley crew of Alaskans and refugees from the lower 48, each one running from the past in one way or another. All are drawn to the northern wilderness by its raw and naked force.

The story focuses on the chemistry between Cody, a taxidermist who grew up in San Francisco, and Mel, a gal drifter who decides to lead a grizzly-bear hunt in order to raise the money she needs to care for her teenage daughter. When her customer appears, a hard-edged Hollywood producer seeking the glory of the kill and used to being fawned over by every woman he meets, Mel and Cody find themselves forced to resolve the romantic tension they've both been ignoring for years.

I always enjoy stories about Alaska and the people there. They are some of the most unusual people in the world. Serious, and funny, and take life as it comes. This story did not dissappoint.