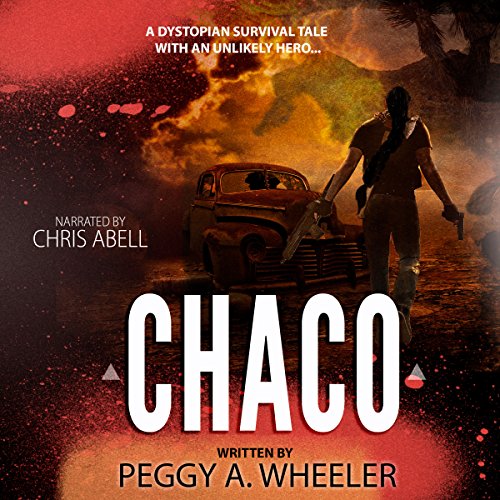 By: Peggy A. Wheeler
Narrated by: Chris Abell
Free with a 30-day trial

When everything you count on for your existence fails, could you survive?

Within days of a series of monster solar storms slamming into earth, electrical grids fail and everything in the northern hemisphere with a computer chip ceases functioning. Electricity won't be completely restored for at least a decade, and the result is that everything modern life depends on to function is gone. There is no way to pump gas or water. Cell towers are wiped out, along with satellites. Airplanes and most vehicles will not operate. Communication is practically impossible. People cannot access life-saving prescription drugs or food. Police, fire services, and the military are overwhelmed, and hospitals can't cope. There's no one to come to the rescue, and as mass panic ensues, people begin dying. Fear and violence escalate until society collapses.

Chaco is a well-educated freedom fighter on a death list in El Salvador. Having fled to the United States, he is in hiding by working for a wealthy couple as their handyman and gardener. Following the disaster, he reveals his true identity, and convinces his employers and their neighbors to follow him over brutal mountain passes to a self-sufficient commune nearly 800 miles away.

But only a few will survive.

What listeners say about Chaco

Not Science Fiction could be Science Fact

Where does Chaco rank among all the audiobooks you’ve listened to so far?

Among the better books.

The Star is Chaco because it is a character with depth.

His accents were well done.He is a good performer.

Truth can be stranger then Fiction

The Risk of EMP Weapons to our Infrastructure especially the Electric Grid is real.


It would require over 70 Billion Dollars to upgrade our Grid to insure that intense Sun Spot
activity or the use of a EMP Device would not seriously impact our country.

All Americans should tell their Representatives in DC that these upgrades are part of our National Defense and that a 70 Billion investment could protect our Multi Trillion Dollar economy.

This story could be Science fact in the future and we are sitting Ducks at this time.

I loved every minute of this book, the story is vivid, it pulled me in and I saw and experienced everything right along with the characters.

This dystopian book shows in horrifying clarity just how quickly society breaks down once disaster strikes. The character interactions show how much we assume about people and how out opinions of people are formed on very little information, and just how wrong those assumptions can turn out to be. The characters are complex and realistic.

The narration is excellent, I enjoyed the character voices and the accents were quite well done, the delivery worked well with the tones and emotions of the story.

Chaco is not your typical end of the world adventure. It’s a character driven story. You’ll fall in love with some and cheer them on while hoping some evil power will destroy others. Peggy does a wonderful job of making you feel like your part of this face-paced adventure.

Chris Abell did an amazing performance as well bringing all the characters to life.

Another creative and imaginative read from Wheeler

Dystopian fiction is not a genre that I generally pursue, but I enjoyed Chaco very much and wholeheartedly recommend it. Peggy A. Wheeler developed complex characters with depth and substance, and these characters were amplified by the exceptional voice talent. It’s clear that Ms. Wheeler did extensive research into scientific phenonemon, survival strategies, and California geography. Very well done!

It is a very good story with likeable characters and emotional scenarios. Hopefully there is a continuation.

breaks all the rules

It was a great listen. The story continually throws you curves and keeps you guessing. You root for the unexpected heroes and boo the many bad guys.

I enjoy post apocalyptic books and this one fitted the bill for me. The story was good with a plot that moved along nicely. There are various characters to either like or dislike and they seemed believable. Friendships are formed and enemies made.
The story starts just before a solar storm hits earth. An arc that could become a reality one day.

I thought the narrator did a good job with the audiobook and characters.
I would certainly recommend this book.

End of the world and we know

I love the main character. story was good hoping there's a sequel.
narrator was amazing.
it really got you thinking what you would do if something like that happened.

The story centres around Chaco, an El Salvadorian freedom fighter and professor turned gardner.  He studies the stars and what is happening with the sun. When sun flares wipe out technology, he along with the family he works for, their son and his family, and their next door neighbours decide to travel to a commune where their daughter lives.

In somewhat typical fashion (in my opinion, anyway), the majority of people seem to want to loot, kill, and otherwise destroy civilization. I think I have yet to read a book about the this subject where people don't immediately go to the dark side and attempt to destroy due to the lack of leadership and civilization.  The group decides to travel to the commune in part due to the fact that men are breaking into houses around them and looting.

The group ends up heading into the mountains to travel overland to the commune, so they don't encounter too many other people. There are tragedies along the way, and, of course, tension between the members of the group.

I like the author's style of writing; she's very descriptive, and the story is easy to read/listen too and the narrator is quite good.

Don’t try to fall asleep listening to this

I tried. Ended up till 2 am. Great, fast paced story. Excellent job by the narrator. If you like dystopian fiction, you’ll like this. I gave it 5/5 because I like both this genre and the author, Peggy. Her ability to write from so many different perspectives is amazing