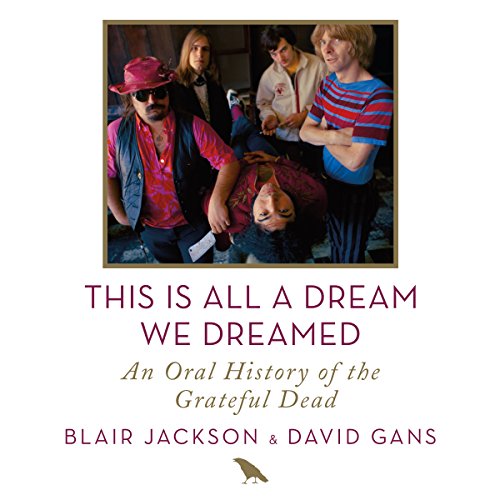 This Is All a Dream We Dreamed

In This Is All a Dream We Dreamed, two of the most well-respected chroniclers of the Dead, Blair Jackson and David Gans, reveal the band's story through the words of its members, their creative collaborators and peers, and a number of diverse fans, stitching together a multitude of voices into a seamless oral tapestry. Capturing the ebullient spirit at the group's core, Jackson and Gans weave together a musical saga that examines the music and subculture that developed into its own economy, touching fans from all walks of life, from penniless hippies to celebrities, and at least one U.S. vice president.

This definitive book traces the Dead's evolution from its humble beginnings as a folk/bluegrass band playing small venues in Palo Alto to the feral psychedelic warriors and stadium-filling Americana jam band that blazed all the way through to the 90s. Along the way, we hear from many who were touched by the Dead—from David Crosby and Miles Davis, to Ken Kesey, Carolyn "Mountain Girl" Garcia, and a host of Merry Pranksters, to legendary concert promoter Bill Graham, and others.

Throughout their journey the Dead broke (and sometimes rewrote) just about every rule of the music business, defying conventional wisdom and charting their own often unusual course, in the process creating a business model unlike any seen before. Musically, too, they were pioneers, fusing inspired ideas and techniques with intuition and fearlessness to craft an utterly unique and instantly recognizable sound. Their music centered on collective improvisation, spiritual and social democracy, trust, generosity, and fun. They believed that you can make something real, spontaneous, and compelling happen with other musicians if you trust and encourage each other, and jam as if your life depended on it. And when it worked, there was nothing else like it.

Whether you're part of the new generation of Deadheads who are just discovering their music or a devoted fan who has traded Dead tapes for decades, you will want to listen in on the irresistible conversations and anecdotes shared in these pages. You'll hear stories you haven't heard before, possibly from voices that may be unfamiliar to you, and the tales that unfold will shed a whole new light on a long and inspiring musical odyssey.

What listeners say about This Is All a Dream We Dreamed

Not so much a book but more an audio documentary compiled from quotes to form a chronological story. I particularly enjoyed hearing the views of the surrounding family and friends. This really is a special insight to the Grateful Dead.

Really Good. Gave me a new appreciation for band.

I thought I knew the story but learned a lot. gave me a new appreciation for The Dead.

With so many books about this group, it's refreshing to have two pros covering the history of the Grateful Dead from other points of view( look at it as the Grateful Dead as this musical hurricane, and the friends, associates, managers and alike as the eye of the this musica; vortex of creativity and the experience of being with the best rock band ever. With my first show, 17 November 1973 at UCLA Pauley Pavilion and that Wall Of Sound and then full on the bus in 1980, the Dead is what music is all about --playing as it is going on now, the improvisation the what does this lead to and how do we get out of this and go somewhere else. Mr. Gans and Mr. Jackson who have dones their homework on the Dead now covers the story of the dead with a fantastic point of view more details of what it was like to be this band and how they got to be in the words of Bill Graham,"They're Not The Best At What They Do, They're The Only Ones That Do What They Do". Sit down, plug in(whatever refreshment you desire and listen, listen to the passions, the excitement and the love that this band gave and received. Enjoy!!!

Better to be ahead...

What did you love best about This Is All a Dream We Dreamed?

If you love the Grateful Dead- you will love this.

What was one of the most memorable moments of This Is All a Dream We Dreamed?

Tough. It is tough because we are so familiar with these voices in reality, listening to someone 'play' Jerry, Bobby and so on- it is difficult. I got over it mostly.

Would you consider the audio edition of This Is All a Dream We Dreamed to be better than the print version?

This book is one of the few I have not read in hard copy. I kinda stopped reading GD books because there was rarely something new. It was cool hearing this book for a couple of weeks going to work and back home. Nice feel .

What was one of the most memorable moments of This Is All a Dream We Dreamed?

Warm and not showy like trying to be any ot the members. Maybe the guy who played Phil was trying and he pulled it off.

makes you wish you were there

books is from many different points of view, help to understand the performing point of view. and how they came to their setlistidea ideas