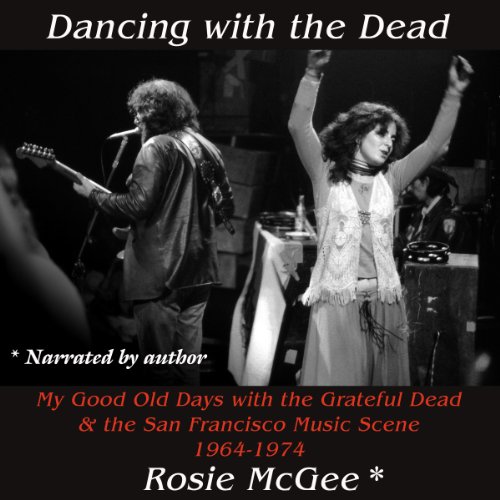 Dancing with the Dead

Photographer and Grateful Dead insider Rosie McGee narrates her memoir, telling dozens of previously-untold stories of living, traveling and working with the Dead during their first decade as a band. Not just for Deadheads or baby boomers - this audiobook is for anyone seeking a woman's intimate account of the San Francisco rock music community in the Sixties, rare in a field of such books most often written by men.

Included are firsthand stories of Autumn Records; The Matrix nightclub; the Acid Tests; Olompali; life in the Haight-Ashbury; the Human Be-In; the Grateful Dead (and the author's) bust at 710 Ashbury; New York, Toronto and Montreal with the Dead and Jefferson Airplane; Monterey Pop; Altamont; the Dead's Europe '72 tour; and encounters with individuals as diverse as Tom Donahue, Phil Spector, Lenny Bruce, Janis Joplin, Owsley Stanley, Timothy Leary, Jesse Colin Young, Julie Christie and many others.

What listeners say about Dancing with the Dead

An insider’s view of life with the Grateful Dead for the first ten years of their history played out with a backdrop of the San Francisco music scene. Rosie found herself in the middle of the action, as it were, and presents this highly articulate and engaging story of her life at the center of this cultural vortex.

A splendidly enjoyable read/listen from cover to cover. Hearing her recite the adventures of her life during this period of her life is a real treat.