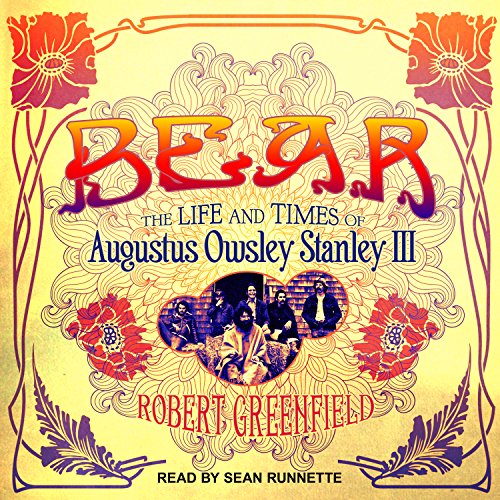 By: Robert Greenfield
Narrated by: Sean Runnette
Try for $0.00

The creator of the dancing bear logo and designer of the Wall of Sound for the Grateful Dead, Augustus Owsley Stanley III, better known by his nickname, Bear, was one of the most iconic figures in the cultural revolution that changed both America and the world during the 1960s. Owsley's high octane rocket fuel enabled Ken Kesey and his Merry Pranksters to put on the Acid Tests. It also powered much of what happened on stage at Monterey Pop. Owsley turned on Pete Townshend of The Who and Jimi Hendrix. The shipment of LSD that Owsley sent John Lennon resulted in The Beatles' Magical Mystery Tour album and film. Convinced that the Grateful Dead were destined to become the world's greatest rock 'n' roll band, Owsley provided the money that kept them going during their early days. As their longtime soundman, he then faithfully recorded many of the Dead's greatest live performances and designed the massive space age system that came to be known as the Wall of Sound. Award-winning author and biographer Robert Greenfield's definitive biography of this Grateful Dead legend masterfully takes us through Owsley's incredible life and times.

What listeners say about Bear

Even though I am intimately familiar with Bear and his story, this is a very detailed telling of the life of someone who did everything to stay as low key as possible. He really showed the real heads in the dead scene how humility and not trying to be "the man" is what the real scene was about. It was a delicate, fantastic moment in time that was about the collective and not the self. He was a beacon of light that changed our world, and gave us a peak through the looking glass. There is one interview on YouTube from before he pass. one of only to video recordings of him speaking. the other was at Keasy's place and in that one he avoids the camera and is obviously uncomfortable. I urge you to watch them. thanks bear

Changed my life, before it was ever written

so nice to actually learn about the time I've never known, but lived.

I would have loved to have gotten one of those belt buckles. Or anything he made really! Good book over all tho. 😵‍💫🤠😵‍💫💀

the life story of one of the best sound producers
, jewelry makers, and acid cooks that ever lived.

Much more than than a chemist

A look at a very complex man and explorer of the mind. Great book about times a lot of us like to remember.

Wonderful tale of a America Artist

Highly recommend this purchase. A story of a man and his dream to become a artist that ended up changing the world as we know it.
Edwin Lightner